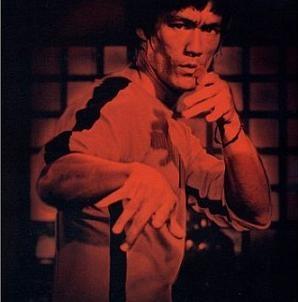 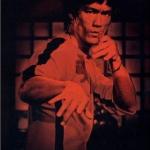 Bruce Lee's unfortunate death left a lot of his fans wanting more. He died before the release of his first stateside movie, and didn't become a major star until after his death. This meant that there were a total of four movies to his name available for the U.S. audience, which hardly satisfied the widespread clamor for his titles. The film companies quickly answered the call, transforming thirty minutes of previously filmed footage of some of Lee's fight scenes into the movie Game of Death. Featuring stand-in actors, plenty of dark shadows, and a distinct lack of Lee's signature style, Game of Death's only major selling point is the amazing twenty-minute fight scene at the end, which makes the movie worthwhile.

Lee (and his stand-ins) plays Billy Lo, a big-shot martial arts movie star. However, stardom doesn't come free. Because of his up-and-coming fame, as well as his great potential to become rich, he is hounded by a syndicate attempting to sign and exploit potential stars. When the syndicate drags Lo's girlfriend Ann into the conflict, Lo is forced to fake his own death in order to buy him enough time to find and shut down the syndicate and reclaim his life and that of his girlfriend.

Because the movie was constructed from mainly scrap fight scenes, much of the plot is advanced by the stand-ins rather than actual footage of Lee. In addition, the fight scenes not starring the genuine Bruce Lee lack all of the characteristic style that made Lee so popular. However, the way to enjoy the film is to realize that the plot is crafted entirely to drive the story to the final fight scene in the tower, where Lee truly shines, and where much of his best fighting is exhibited. The final scene showcases almost all of Lee's amazing talents, from his weapon style, to his grappling ability, to his superior speed. The best part of it involves a match between Lee and one of his protégés, the famous basketball player Kareem Abdul-Jabbar.

Even though the stand-ins were sub-par, the work done to flesh out thirty minutes of film into a full movie was interesting and rather ingenious. Instead of filming a separate scene for Lo's funeral, they used actual footage of Bruce Lee's funeral for the scene in the movie. The stand-ins all wore sunglasses, and were often filmed in dark areas where the differences between the stand-in and the genuine Lee would much less noticeable.

Lee's death was a tragedy, and the talent that was lost is inestimable and irreplacable. There's no telling what kind of a star he could have become if he had continued producing movies. What we do know is that Lee was a one-of-a-kind martial artist. Using his own specially crafted style of karate called Jeet Kune Do, Lee changed the face of martial arts films for the better with his popularity, and is responsible for the rise of a number of famous martial arts stars, including Jackie Chan, Sammo Hung, and the iconic Chuck Norris. Lee's legacy continues on long after his death, and he is a man who deserves to be remembered.

Game of Death and other Bruce Lee films can be purchased online at Amazon.com.