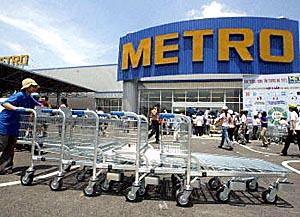 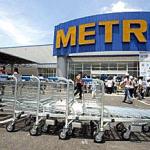 The company opened its first store in Ho Chi Minh City in March last year and a second in the southern business capital in December but the inauguration of the third store in Hanoi marks its first venture in the north.

"We aim to have eight stores across Vietnam as part of a planned total investment of 150 million euros (171 million dollars) by 2007," said Heinrich Birr, Asia-Pacific chief operating officer of Metro Cash and Carry International. Metro already operates 16 Cash and Carry stores in China, and since December has opened two outlets in Japan. In October, the group will enter the Indian market with a store in Bangalore.

"It is our clear long-term strategy that we invest in Asia-Pacific and in Russia due to the fact that the European markets are already quite mature," said Birr, who attended the Hanoi opening.

The group's Cash and Carry operations generated 621 million euros (710 million dollars) of sales in Asia in 2002, the equivalent to 2.6 percent of the division's global sales. The Dusseldorf-headquartered group intends for the region to account for 10 percent of Cash and Carry global sales over the medium term -- a three- to five-year period.

Ben Britz, retail analyst with Morgan Stanley in London, says this is ambitious even within a 10-year timeframe. "Even if one assumed no growth in the rest of the business, this would imply Asian sales have to grow from 621 million euros in 2002 to 2.6 billion euros in 2012," he said.

Birr, however, says the target can be met. "I am firmly convinced this will be achievable because our major investment is in China and we will grow there very fast in the future. I think our India plans, once they are underway, will produce similar results," he said.

Metro Group operates five divisions in addition to Cash and Carry, including hypermarkets, department stores, DIY outlets and electronic goods stores. So far, Cash and Carry is the only brand it has introduced to Asia. Birr is adamant that Metro will turn a profit in each of its stores in Vietnam within the next few years despite GDP per capita levels in the communist nation hovering at a paltry 400 dollars per year.

"We are not gamblers and also our shareholders are not gamblers. They want to get a return on their investment," he said. "We expect in two to three years to break even in each store."

Metro's early move into the Vietnamese market, he says, will also give it a significant competitive advantage over its competitors if and when they set up shop. "Vietnam, as an emerging and developing country, is an interesting market because wherever you are the first in you have the first mover advantage. Others who come later will have to compete against us in our niche," he said.

Situated on the outskirts of Hanoi on a 46,000-square metre site, Metro's newest wholesale store will initally employ over 300 staff and will sell everything from groceries and alcohol to computers and household appliances. "Our largest customers will be the hotel and restaurant trade but we will also sell to supermarkets and small retail outlets such as 'mom-and-pop' stores," said James Scott, general director of Metro Cash and Carry Vietnam.

"Our third target audience is the business community here, providing them with supplies." Plans for a second store in the Vietnamese capital are currently in development, but Birr ruled out any forays into the mainstream retail supermarket sector for the time being.

Metro operates Cash and Carry stores in over 26 countries.