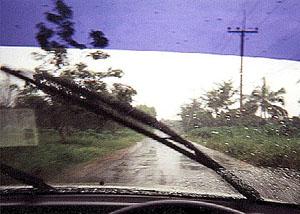 A rainstorm in southern Thailand seen from behind the wheel. 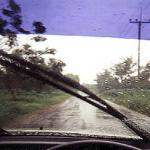 I was first introduced to the melancholy charm of the monsoons by an Indian-American friend, who spoke of sipping ginger tea and watching the rains from a dry verandah [Hindi, varanda].

Like winter in the northern climes, the rainy season is welcomed after the excesses of the hotter days. But like winter, the rainy season "hangs on too long", to borrow Faulkner's words. Cabin fever sets in, a soddenness of the spirit. Papers left lying about begin to curl at their edges and grow limp in one's hands. Clothes, blankets grow heavy and musty. Alarm clocks fail to stir the sleeping, because the dark clouds are scudding across the horizon, and the sun, though risen, is nowhere to be seen. Even the heroes of the Ramayana become gloomy and irritable as the season wears on.

But the monsoon is also about cleansing, regeneration. ("Monsoon" comes from the Arabic mawsim, "season.") Prior to the rains, the tropical world has become dry, dusty, brown, dead. Reservoir levels reach their nadir, a tap coughs and spits out turbid water, fallen leaves crackle underfoot. The sun blazes down upon a parched world. In the north of Thailand, hill-tribes practicing slash-and-burn agriculture char what remains, valley people burn piles of fallen leaves, and together they launch into the still air a heavy haze that chokes, that infiltrates one's clothes.

When the first raindrops fall, it is almost as if the land and its creatures heave a collective sigh. After the rains came this year, a friend of mine observed, "Everything is happy now." He meant the frogs that appeared as if through spontaneous generation, the pheasant-like birds bursting out of the canopy, the leaves sprouting almost audibly from the barren branches.

Writer Tom Robbins has said that rain is like a benediction, a blessing upon all things that need water to live, that are themselves mostly water. Of course, Robbins was writing about America's Pacific Northwest, home to the world's only temperate rain forest. There, it rains much of the year, but the rain is usually a constant, enshrouding mist.

In tropical Asia, the benediction is more akin to a fire-and-brimstone sermon. Most of a year's worth of rain falls during a few hours each day over the course of a few months. The flooding that annually results reveals how little even semi-developed Asian countries like Thailand have done - or, indeed, can do - to mitigate the deluge. Some Thais succumb to leptospirosis, a lethal disease transmitted to humans through contact between open sores and the contaminated floodwaters.

This does not deter people from going out, however. They have precious little choice. Though the streets are rivers, one must still get to the market - by boat. If you've only got a motorcycle, then wear a poncho or hold an umbrella.

If I remember only one thing about the rains in Thailand, it will probably be this: Two girls are on a motorbike stopped at a red light while ankle-deep gray water laps up against the median. The girls' faces are flush from the wind and the rain, and they are soaked to the bone. Their clothes and jackets look like so much damp crepe paper, about to disintegrate. The driver points her red, floral-patterned umbrella defiantly toward the heavens. On the tip of the passenger's nose is a fat drop of water. She sneezes in the Thai way: uh-SHOY! Uh-SHOY!

Despite this, both of the girls are smiling, giggling.

In India, the rains tended to be more catastrophic. Power outages were frequent and prolonged, and the water was knee-deep, absolutely filthy, filled with floating trash and even the odd swimming rat.

Bombay. 1997. Day of the largest recorded rainfall of the year. I shared a cab with an Indian friend. The road we normally took was impassable, so the driver took an alternate route. I was told that the drivers took advantage of the situation by overcharging Indians and foreigners alike. One Indian couple was reported to have spent Rs. 1000 for a short cab-ride (200 is the most one can expect to pay.) Other drivers would pretend that certain roads were impassable in order to justify more circuitous, lucrative routes. The cabbies even had a racket going: they paid people to clog the drains so that the cabbies could raise their rates! As our cab crawled along, our driver leaned out of the passenger-side window and joked with strangers. Together they laughed upon seeing that a theatre was being flooded. "Pani, pani!" the driver repeated, like a mantra: Water, water! It wasn't a municipal emergency: it was a party.

Bombay's indispensable commuter trains ground to a halt. Absenteeism at work and school rocketed. Friends of mine reported one-hour commutes becoming eight-hour commutes. Another spent the night in the city because she couldn't get to her home in the suburbs. Students saw in the monsoons an opportunity to play. Infallibly conscious of the greater good, they also made a point of reminding me with schoolmarmish formality that the monsoon provides the water essential to living things.

Sometimes it was hard to share in their optimism, especially when the rains combined with Bombay's nasty air, thus creating a palpable, goopy mist that caked your lungs, your skin, your hair.

But in India, tolerance is critical, and one day I thought I'd finally learned it: I was walking through the city, a porous satchel slung over my shoulder. In the satchel was my journal, not waterproofed, inscribed with ink. Suddenly the rains came in earnest. I knew that the water was seeping into my satchel and threatening to destroy months of literary labors. But I was not angry. I submitted to the editorial board of the gods. Discontinuity and impermanence, once worshipped in the abstract, had become a matter of course.