A Morning on the Banana Boat Canal 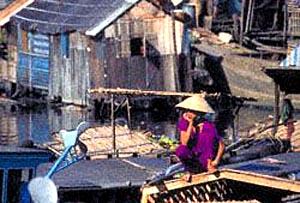 Ben Nghe...is a wholesale market. It's where boats from the Mekong Delta come to unload their produce for the markets around the city. 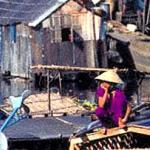 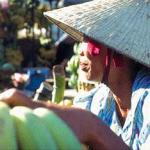 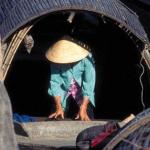 I thought I'd been everywhere, covered all the city's major attractions-the Ben Thanh Market (and a host of others), Notre Dame Cathedral, the tourist strip on Dong Khoi Street, Cholon (Chinatown) and the elegant old French quarter in District 3. Still, somehow I felt that I'd failed to see Saigon.

A single entry in a tattered book bought from a souvenir stall mentioned the banana boats. I remembered the old Belafonte song: "Hey Mr. Tally man, tally me bananas..." and I had to seek them out.

The best way to go anywhere in Saigon is by cyclo. They're noiseless, comfortable, cheap and slow enough to let you savor the street scenes. Staying in Pham Ngu Lao where all the tourists are, I was heading for the Ben Nghe Canal, where they definitely aren't. This is one of a network of canals that run off the Saigon River. The Ben Nghe divides District 1, which is called "downtown" from District 4.

To get to District 4, you cross the Camette Bridge. Once there, you're in another world. The first thing you notice is the quiet. Gone is the high-pitched scream of the motorbikes that play their kamikaze games on the city's major intersections. In District 4, pedal power rules. Still there was traffic to contend with as I picked my way up Doan Van Bo, the road that follows the canal. Seven in the morning is a peak hour in District 4.

Doan Van Bo is lined with timber yards and timber offices. Through the gaps, I glimpsed the boats. They seemed to form a suburb of their own, packed as they were, bow to bow and stern to stern more than halfway across the wide canal. They carried traffic too-a steady stream of women and men picking their way to and fro across the boats. They were unloading the bananas.

Finding a path to the water's edge, I stole down for a closer look. Here, I knew at last-and I felt a little like Hemingway to think it-was the real Saigon. The far side of the water was a patchwork of houses. Leaning up against each other's flimsy-looking frames, you felt that if one were taken out, the rest would tumble down. The newly risen sun imbued them with a beauty they perhaps did not deserve...yet maybe they did.

The workers had now formed a line and big green branches of bananas were swung from hand to hand, to be stacked right next to me. My presence was acknowledged, in a cursory way, with the odd wave and a friendly chuckle. The boats themselves, with their half-cylindrical canopies, looked like sunken covered wagons. Stacked to the brim with fruit, you wondered where their owners got to sleep-on a mattress of bananas?

Ben Nghe, I found out later, is a wholesale market. It's where boats from the Mekong Delta come to unload their produce for the markets around the city.

I was now in search of a higher perch to take in the whole scene. Across the road a three-story house stood starkly among the single-story ones. An elderly chap was lazing on a hammock on the porch. Before I even spoke, he summoned who I guessed was his granddaughter. I pointed to my camera and then to the top floor of the house, hoping she would get the idea. "Do you want to go upstairs to take a photo?" she said in English as clear as any I had heard in the city. "Can I ask you some questions?"

Le An Bo was a student and the questions she asked displayed quite an insight into western ways. She was curious about Australia. We discussed lifestyles in our respective countries and swapped addresses. She took me to the third floor room where, after hitting my head on the top of the door, I was gracefully escorted to the balcony to get my view. With these positive experiences behind me, I wanted to see more of District 4. My map gave names only for the main thoroughfares. The other streets were shown as a maze of lines cut by little waterways. It was an accurate rendering. Ho Chi Minh City, even in the downtown parts, has its main blocks crisscrossed by a labyrinth of narrow lanes, some barely wide enough for two people to pass. They are lined with private homes, some up to five stories high, and accommodate snack bars, grocery stalls, temples and lots of local life. The skinny streets of District 4 followed suit, only here the houses are more like huts, rarely more than a single story and often straddling stagnant tracts of water. There is no room for a car.

A swarm of kids played touch and run and wanted pictures taken. Greeting came from houses as I passed. These days, tourists in downtown Saigon seem almost as numerous as the locals. Any attention you get comes mainly from the cyclo drivers (they will sometimes shadow you for twenty minutes or more) and street hawkers. In this area, a foreign visitor seemed rare. Meanwhile, back in District 4, my stomach had taken note of some quaint teahouses I had passed along the way. It bade me double back to one that was particularly well patronized. Like all the other customers, I sat on a plastic infant's chair, my legs in a hopeless sprawl. Tea came immediately. I mimed some ham (oink, oink), eggs (cackle, cackle) and bread (slicing knife). The word I got was an apologetic "no." This was a teahouse only. A conference followed. A lad at a table next to me jumped up and ran off (I wondered if he'd paid his bill). In five minutes, he was back with a plate of ham and eggs in his hand. I had my breakfast.

Meanwhile, the manager, Mr. Le Hong Dhong, had introduced himself. His few words of English were enough to let me know I was welcome here. The patrons nodded approval-beaming smiles all round.