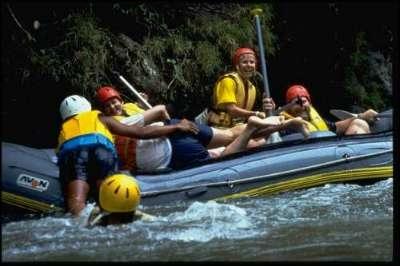 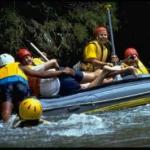 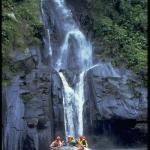 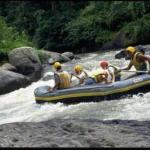 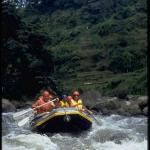 White water rafting was something I was yet to try. Not beyond a challenge, I agreed to take the plunge. Bali's Ayung River, I had secretly been told, is a "soda" - the ideal place for novices like me to cut their rafting teeth.

Adventure Rafting headquarters are set high on a cliff above the river, near Carang Sari village, some 8 kilometres north of Bali's famous centre of arts and craft - Ubud. At 9 a m I joined the twenty other novices who had assembled for their briefing. Then came disquieting news. I was to be put into an inflatable kayak - not in a raft - so I could "...have a bit more excitement and skip ahead to get some shots." Jean-Claude Van Damme, I was reassured to learn, had done the Ayung in a kayak too!

"Very," said Craig with a grin. "You'll be sitting at the front."

"We have water-proof bags for that - standard equipment."

"What about one for me?"

So it's on with the helmet and life jacket (the first time I'd worn one), and off we rafties file, down the four hundred and fifty steps that take you to the river. Half way, you look down on the rafts - "state-of-the-art fully imported Avon inflatable ones," I was told. (Where was my kayak?)

Craig was telling me how he came to be here, from Yorkshire via Sydney.

"There wasn't a big adventure scene in Yorkshire. Bali is just wonderful, especially on the river here."

That, I was beginning to see for myself, as we stepped onto the mooring platform and gazed along the jungled river gorge. Giant "Barong" butterflies, buoyed by the watery air, barely bothered to flap their bird-like wings.

The Ayung is the premier river in Bali. Fed by the Bedugal Mountains in the north, it winds its way southwards through Karangasen and the rice terraces at Sangeh, feeding most of the country's irrigation system as it goes. It passes by Ubud.

We would learn more of the nature of the river as we paddled along. Our guides, all native Balinese, were waiting in the rafts - one for each; Craig for my kayak.

The first thing I learned about white water rafting was that you don't simply jump in and let the river and the guide do the work. Rocks and rapids have to be negotiated, and for that you need instruction. I was given a paddle. Once under way, I had to learn to use it.

"Forward one, two, three, STOP! Back one, two, STOP", and my God, we hit the big ones. Whoosh, I copped a dousing as I held the paddle - pro style - high above my head. Pretty cold, this Ayung river water.

"Back one, two, STOP!" and we banged against a rock. What was that I had to do? Oh yes, lean towards the rock to stop the boat capsizing; but the rock was gone, and now we're in a swirl, going backwards, I think. I glimpse Craig - twice - then the boat behind, my paddle cracks against a rock. And this is only a grade three river, out of a possible six.

"That rock wasn't there, last time", Craig lets me know as I try to get my bearings. Looking back, the raft behind is perched atop the big intrusive rock, the rafties tumbling out or scrambling in. Luckily the good old Ayung is only waste deep at most. There are squeals of delight. Craig barks instructions and the grounded raft is back on course, to join us in this calmer stretch.

"How come we didn't sink back there," I asked. "The boat was under water for a while."

"It's the new design," Craig explained. "New strong materials allow for a high aerated bubble all along the bottom, with holes along the side. The bubble keeps the bottom above river level, and the water simply runs out the holes."

"Ingenious," says I trying to fathom it, as doubtless you are too.

We paddled past a waterfall, one of about a dozen modest drops you see along the way. Most are run-off's from the irrigation system. We passed beneath the sumptuous Kupu Kupu Barong Resort where film stars spend their honeymoons. A monkey was grinning at me from the bank. Had he seen me in the rapids?

"Just about anything grows along here," Craig is telling me. "Those are sugar palms, where villagers get the brown sugar they use in cooking. Over there are banana trees, and that's the bamboo they use to decorate the villages for special events. Shrimp are trapped here too, and most of Bali's drinking water comes from the springs that flow into the ..."

But we're back in the rapids

"Hold on!" and we hit sideways, plummet a metre or two, get flipped about, and somehow come up straight on course, ready for whatever comes next. Gee, this is fun. I'm getting cocky now. These boats are unsinkable. At the next stretch of calm I fetch my camera from the back and tuck it under my knee, ready for action.

The next waterfall is a big one - a fifty metre drop. It gushes over rocks, and sprays into a shallow pool. You can step out of the raft here and stand under the fall, if you fancy getting any wetter than you are. But not for me this dallying, not for this demon on the rapids.

"When do we get to the next ones, Craig?"

And off we shoot. Forward one, two, and again we're on the white ones. "Forward one, Back, one, STOP! STOP!" But I didn't. Up went the paddle and the legs. Out went the camera bag. Out went the arm, to snatch the camera from its watery doom, and balanced on my back across the bow, the next rapid flipped me neatly back into the kayak.

Eight kilometres and two hours passed like rapids on a rock. There were smiles and waves from locals, doing all those rural chores - planting, reaping, trapping - they do along the banks. Iridescent kingfishers swept the stream and lost themselves in iridescent leaves. There were lots more rapids too, (piece of cake now), then steps - not so many this time - that led us to our lunch.

Up here you get to see the rice fields - those nicely irrigated ones, with thatched farm houses, and farmers driving buffalo to turn the sodden soil - the kinds of scenes that must have been above us the whole journey long.

Lunch at the rustic "Yanie's" restaurant - built in the traditional Balinese style - is that sort of meal - healthy, tasty, plentiful - you reckon as a master of the Ayung you have thoroughly deserved. You meet your fellow rafties.

"So those were your legs, Roy, sticking up out of the water."

"Was that you flicking water at me with your paddle?"

"I was disappointed. I only fell out once. Wasn't it great!"

We all agreed wholeheartedly with that.