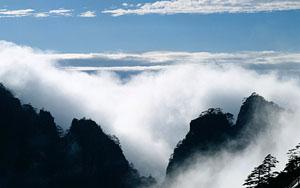 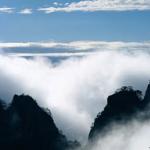 Two stories have near universal appeal: "man and woman fall in love" and "person goes on a journey." This because our biological mandate is to be born, journey through time, and die - meanwhile making as many near copies of ourselves as possible. Love confers meaning to the rather meaningless urge to replicate; travel confers meaning to a journey whose last stop is the grave.

The novel Soul Mountain by Gao Xingjian, the first Chinese ever to be awarded the Nobel Prize for Literature, tells both stories in a refreshingly new way: the journey is related by 'I', while the love story is told to 'you', whose lover is a third-person 'she.' The two stories occupy alternate chapters, and ultimately accomodate a 'he' and a 'they' (Xingjian disbelieves in 'we.')

Xingjian fiddles with voice, and also with form. He introduces a 'critic' to mock his own book, and the critic incidentally sums up the novel's formal experiments. "You've slapped together travel notes, moralistic ramblings, feelings, notes, jottings, untheoretical discussions, unfable-like fables, copied out some folk songs, added some legend-like nonsense of your own invention, and are calling it fiction!"

The critic also places Soul Mountain within the modernist tradition although decades have passed since modernism became postmodernism, which in turn (some say on September 11th, 2001) spawned the post-ironic Age. Or whatever. The author defies such wishy-washy neologisms, when 'he' says that he writes "simply because he can't bear the loneliness" -- he writes "to amuse himself."

Loneliness? Why is Xingjian lonely? Born in 1940 in China amidst the bombing raids of the invading Japanese, he received a degree in French from a Beijing institute in 1962. He emerged from China's Cultural Revolution (1966-1976) to write a number of experimental - and, to the Communist Party, unacceptable - plays, stories, and essays on literary theory. Unsettled by popular fame and official infamy, Xingjian left China in 1987 and ultimately settled in Paris. His is the loneliness of the exile-by-necessity.

Soul Mountain, begun in Beijing in 1982, was published in Taiwan in 1990 under the title Lingshan, and was translated into Swedish and French before appearing in English in 2000. The always subtly political Nobel committee was believed to have chosen Xingjian over his Chinese competitors because he alone had abandoned Communist China and criticized the Cultural Revolution's attempt to eradicate the China that once was.

Xingjian's only publication in China since 1987 was a play about the 1989 Tienanmen Square incident. Predictably, official China condemned it. Also predictably, an American group that had commissioned it demanded changes that would have glorified the pro-democracy protestors. Admirably, Xingjian refused.

The journey portion of Soul Mountain describes Xingjian's flight into the heart of rural China in search of lingshan, or "soul mountain". Along the way, he collects folk and Daoist songs to animate a projected historical novel. But because history and religious songs are officially scorned, much of his research is undertaken clandestinely. The rural Chinese cling stubbornly to their life-affirming, often bawdy traditions, but seldom without fear of arrest, or worse. The net effect, Xingjian angrily declares, is "a race of people who have lost their souls!"

Xingjian is no fan of industrialization either. He avoids cities, and along the banks of the Yangtze he discovers only "warehouses, warehouses, warehouses, silos, warehouses, silos...." China's environment is dying: "the black Wusong River which goes through [Shanghai] gives off a perpetual stench" and has poisoned its fish and turtles. The rural situation is not much better. The tigers are gone, the trees are going in truckloads, and poachers are shooting pandas. The dread Three Gorges dam project is much discussed, mostly deplored. "It's people and not animals that are frightening!"

When the critic calls Soul Mountain modernist, the author disagrees: it is Eastern. This is trebly true. First, the novel is preoccupied with the typically Eastern conflict between the active and the contemplative, between the worldly and the spiritual life. Despite "the stupidity of human beings," Xingjian cannot wholly part with human society. "I must return to the smoke and fire of the human world to search for sunlight, warmth, happiness" - the wages of which is "anxiety." He shuns social movements and current events. Instead, he harbors "the desire to be barefoot and sitting on a doorsill worn black and shiny by all the people who have sat upon it" - a desire for community, continuity, even good old Bacchanalian sex and violence.

Soul Mountain is "Eastern" also in its equanimity toward death, its acceptance of individual insignificance, its acknowledgment that "fate is unyielding." In the end, "you are at most only a spoonful of green seawater." Encountering maggots devouring corpses, "you" realize that "your body sooner or later too will be eaten up."

I once saw Kurt Vonnegut Jr. explain what makes great literature great. He drew a pair of axes. The x-axis was time; the y-axis was value: positive good, negative bad. He then drew the graphs of standard stories or story lines. For example, the standard "boy-meets-girl" story went from zero (boy alone) to high positive (boy meets girl) to high negative (boy loses girl) and back to zero (boy alone). Kafka's "Metamorphosis", in which Gregor Samsa awakes to find himself transformed into a giant cockroach, goes to negative infinity and never recovers. These two stories are not great, said Vonnegut; they won't last.

He then proceeded to consider Hamlet. The ghost of Hamlet's father appears. Is this good or bad? Hard to tell. Hamlet loved his father and is glad to see him, but not glad to be reminded of his untimely death. The graph is flat. Hamlet kills Polonius: good or bad? Well, murder is bad, but wasn't boring Polonius asking for it? The graph of Hamlet as a whole is flat, as are the graphs of all great stories.

By this criterion, Soul Mountain is a great story. Life just keeps on happening. Good? Bad? Who knows? Compared to what? Having crisscrossed China for a seeming eternity, steeped himself in its checkered history, encountered strangers and friends of all stripes, discovered that the way to soul mountain is as ineffable as the Daoist "Way", the narrator finds himself alone, staring into the eyes of a frog. In the frog he sees God, and in God's eyes he finds no answers. Snow falls - this is all.

The conclusion too is Eastern. Socrates said that to admit your ignorance is true knowledge. Xingjian admits that he does not "understand" anything, but - here is the Oriental twist - "it is best for me just to pretend that I understand even if I don't." Pretense is the price the philosopher must pay to remain in human society. Socrates didn't pay, and he drank the hemlock. Xingjian pays, and he drinks of humanity.