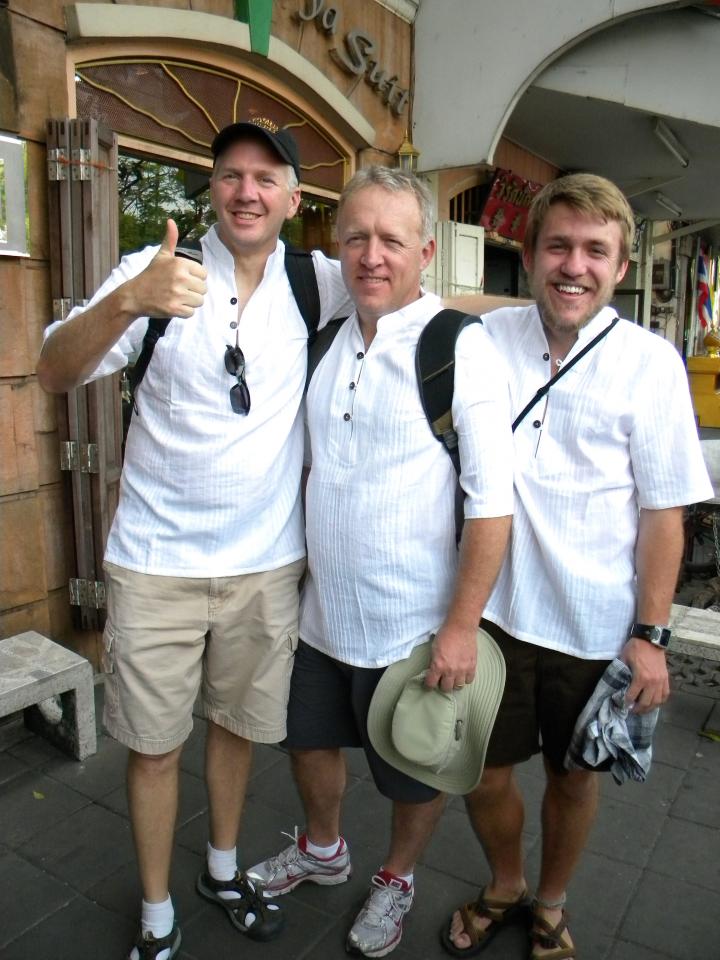 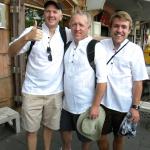 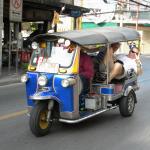 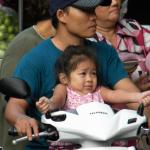 After our encounter with the less-than-honest Mr. Epaulet, I was not going to be fooled again.

I was standing on the street corner waiting for the rest of our crew to catch up.  I was looking at the tourist map of Bangkok.  A young Thai man standing next to me asked if he could help.  I explained that I was trying to figure out what we wanted to see and do next.

"Well, what have you seen already?"  Wow, how refreshingly helpful after yesterday's con job.

I told him what we had done already.

"Have you been to the reclining Buddha, yet?" he asked.

"May I?" he gestured to my map and pulled out a pen.

He circled the reclining Buddha.  "And then some good Bangkok shopping..." He drew some more lines. "...and the Standing Buddha temple."  More circles and lines.

Hey thanks, that looks like a pretty good plan. This guy just saved us a lot of time.

He explained that he was from a small Thai village and he was in Bangkok visiting family.  Ah, a fellow tourist just like me.

By now the rest of the family had caught up to me and my new friend.  "Would you like for me to get you a pair of tuk-tuks."

"If you don't mind, that would be really helpful."  Wow.  So friendly.  So helpful.

He explained to me that he had told the drivers to take us around and to wait for us at each site.  And it was only going to be about 100 baht for several hours.  Now that's more like it.  He reviewed our itinerary: Reclining Buddha, some markets, Standing Buddha temples.

We didn't specifically ask for the market, but hey, this guy knows what he's doing and I think the ladies would like to do a little shopping.

After being snookered yesterday, I was really thankful to deal with a straight-shooter.  Out of appreciation, I slipped him a few baht -just enough to buy himself a cold drink.  I thought about giving him a little knuckle tap, but decided we had have enough of those yesterday.

We all piled into our two tuk-tuks and of we went.

The reclining Buddha was pretty cool.  But after ten minutes he was still just lying there. I started to wander. My mind started to wander. One-hundred baht for the better part of the afternoon. I'm so shrewd.  I'm getting the hang of this trekking through third-world countries thing.

Some thing's not adding up here.  Wait a minute, what kind of markets are these they're going to be taking us to?  Oh my goodness, they're going to take us a tailor.  I read about this in Lonely Planet and I have seen the tailor shop everywhere.

When we had all finished watching the Buddha recline, we reconvened at our tuk-tuks.  I approached our driver and told them we had a change of heart, we were no longer in the mood for shopping.

"Okay buddy," I pulled out my wallet.  "How much would it cost me to skip the ‘market'?"

But he wanted nothing to do with it.  "But the young man with the map said Reclining Buddha, market, Standing Buddha temple."

We went back and forth for a few minutes until finally my driver confessed to me that if he takes us to the tailor's, the shop owner will give him and his buddy their gas money for the day even if we don't buy anything.

Well at least that explains how he can spend the afternoon being our own private tour guide for just US$3.00.  I knew it was too good to be true.

Okay, okay.  Fine.  Hey, it's just a tailor.  How bad can it be, we'll just go and get it over with and be on our way.  But I having visions of  hard-press timeshare sales pitches in Boca Raton.

Alright my people, let's get this over with. Back into the tuk-tuks.

Sure enough, we pulled up to a men's clothing store which was run by men from India or Pakistan.  Apparently, no matter what country you go to in Southeast Asia the tailors are Invariably  from the Indian sub-continent.

I looped back around to the front of the store and saw a rack of light-weight, short-sleeve cotton shirts.  "Hey Austin," I called to my twenty-year old nephew.  "You know what you need?"

I have found that when traveling abroad, multiple occasions will arise that will give you a choice to either get yourself all worked up or to just flow with it.  I have learned that it usually just best to make lemons out of lemonade.

Five minutes later, all three of us -my nephew, my brother-in-law, and myself were cracking each other up as we tried on matching shirts.  While our wives and daughters wanted to die of embarrassment, we strutted in front of the mirror convincing ourselves that these US$16 shirts were the hottest things since Nehru jackets.

We tried to get the shop proprietor to meet us halfway on the price, but he wouldn't budge.

You know what, let's just pay the man the $16.  Consider it the cost of our escape.  At least it's a whole lot cheaper than buying a custom-made suit.

I'm guessing this shop doesn't sell a whole lot of suits, but I sure bet they sell a lot of those $16 shirts on that rack right there by the door.

And -unlike Boca Raton- at least they didn't ring a bell every time they made a sale.

And off we went in our tuk-tuks to the Standing Buddha temple.

Three days later, I saw the exact same shirt in a night market for US$5.00.

Ah, but it didn't come with a three-hour tuk-tuk ride.