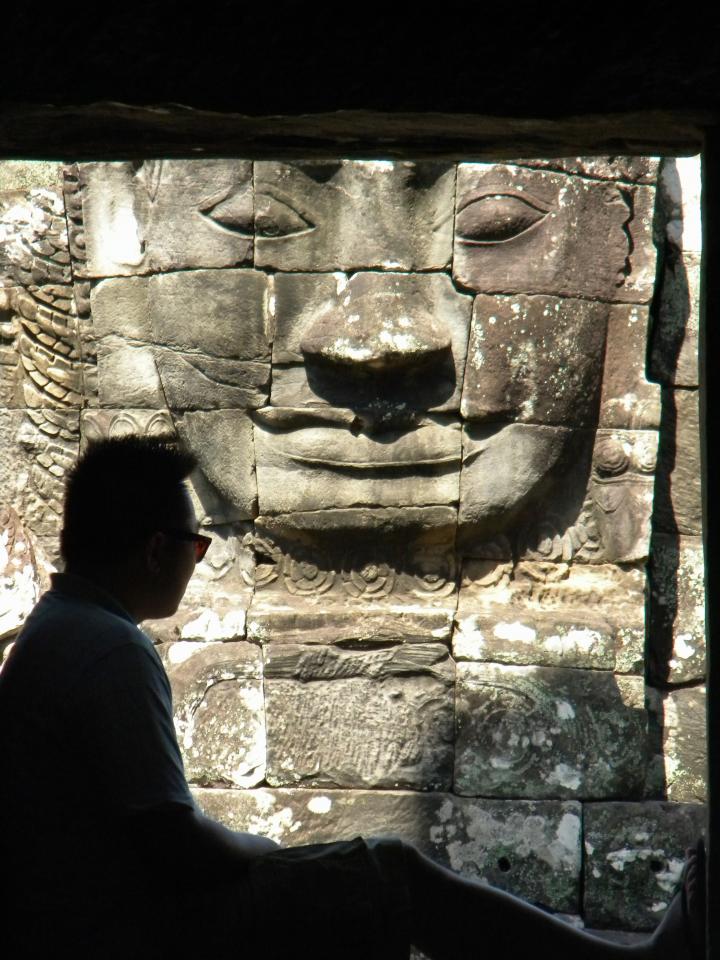 among the temples of ankor Wat 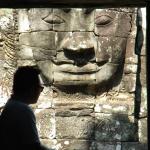 Ranking right up with the pyramids of Giza, the Great Wall of China, and the Taj Mahal, the temples at Angkor Wat in Cambodia are among the world's great heritage sites.

Ankor Wat wasn't known to the Western world until the late eighteen-hundreds when a French explorer wrote about them in a best-selling book.  But even then, very few Westerners had a chance to see them due to the political turmoil that dominated the region for the next hundred years.

It wasn't until about twenty years ago when a previously closed Cambodia opened her borders to the rest of the world that more people had a chance to experience this ancient wonder.

The temple complex had been abandon for several hundred years which allowed the jungle to encroach.  The temples and their extensive carvings are pretty cool in and of themselves, but what gives the place an other-worldly feel is all the trees and their roots that have slowly engulfed big portions of the complex.

While preservationists have cleared away some of the trees, it would be impossible for them to clear away much more without doing further damage to the buildings.  Even if they could, they shouldn't.  The melding of ancient civilization with unstoppable nature is what gives Angkor Wat its undeniable appeal.

One of the coolest aspects of a day spent among the temples at Angkor Wat is the unrestricted access visitors are granted. In Europe or North America, everything -justifiably so- would be cordoned off.  Sidewalks with traffic flow arrows would not only corral you, but they would script your experience.

But here, with few exceptions, visitors were granted full, unrestricted access.  We could -quite literally- climb all over the temples.  It was like -and forgive me for the comparison- a giant jungle gym for adults.  We had a guide -nice fellow and all- but my favorite moments happened when I broke away from him and venture out on my own to explore a corridor, walk through an antechamber, or climb up the top of a temple.

Annika was sick the day we visited Angkor. She was a real trooper but by midafternoon, she was fading fast.  Julie decided to take her back to the "Home Sweet Home" guest house. Laura and Madisson decided to go back as well.

That left four of us including Elise and me back at Angkor Wat.  We were able to see and climb to the top of Angkor Wat temple which is the biggest and most famous of the temples and also the one that gives the complex its name.

By the time we were done, it was getting close to sunset and there is only one way to spend sunset at Angkor Wat.  We hiked and then climbed up a hill to the highest of the complex's temples.  We joined hundreds of other visitors who had already climbed the steep steps and had fanned out over this temple to claim their spots from which they planned to watch the sun set.  We hustled up the steep steps and jostled with the crowd afraid we might not get a good spot.  It was a bit precarious, but Elise and I found a pretty good perch.  We planted ourselves on the edge of the ramparts, let out feet dangle, and waited.

While we waiting for the horizon to swallow up the sun, we watched people.  We saw a young woman sitting on the wall a few feet down from us.  In front of her was a narrow tower that rose up from the ground below. It was close enough that she could have almost reached out and touched it, but in between her and the tower was a twenty-foot drop.  Elise and I saw her stand up and study the column of ancient brick.  Oh no, I said as I realized what she was thinking.  Sure enough, with one swing of the arms she leapt across the gap and onto the column.

I look around for a staff person who might reprimand her.  There was none.  I thought she was going to settle in to watch the sunset from her new perch, but a moment later she jumped back.

But then, I found myself musing, "Hey, that actually looked pretty do-able.  I wonderful if I could . . . ."  Elise interrupted my revelry. The sun was just about to touch the horizon.  We soaked in the view and took a few more pictures.  But we decide not to stay for the rest of the show so that we could beat the huge swell of people down the hillside.

I've seen a lot of sunsets in my day, but few more spectacular than Angkor Wat.

The temple complex at Angkor Wat are impressive. They have lasted a thousand years and withstood the ravages of time and nature.

I just hope they can survive the throng of tourists that come to explore them every day, 365 days a year.