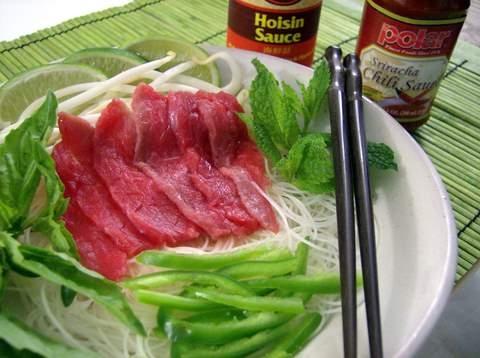 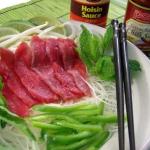 A good bowl of Pho starts with good beef stock. I like to make mine from scratch, using meaty soup bones that I simmer in 4 quarts of water. To the stockpot I add coarsely chopped carrots, celery, and onions, along with a couple of bay leaves and a generous measure of salt and pepper. When the pot comes to a boil, I turn the heat way down and allow it to gently simmer for a couple of hours. Once the stock is done, I strain away the vegetable remains with a colander, and then I pour the broth through a finer mesh sieve to remove the smaller particles. The result is about 10 cups of nice, clear, savory beef stock that can be used for any recipe.

Bring beef stock to a boil in a large soup kettle. Preheat oven broiler. Arrange onion and ginger slices on a baking sheet and brush with oil. Place under the broiler for about 8 to 10 minutes, until they begin to char and blacken. Remove from broiler and add to broth pot. Add nuoc mam, sugar, and Pho spices. Ideally, spices should be tied in a cheesecloth or mesh pouch, however they may also be added loose and strained away later. Simmer on very low heat for about 1 hour. When the broth is finished, you should have about 8 cups remaining.

To assemble the bowls, place one portion of rice noodles in the bottom of each bowl. Top with thinly sliced raw beef. Arrange bean sprouts, mint, basil, cilantro, chili peppers, and limes on a serving platter. Pour 2 cups of simmering broth over the noodles and meat. Add sprouts, herbs and chili peppers according to taste. The steaming hot broth will cook all the ingredients perfectly. Squeeze in fresh lime, and add hoisin and/or sriracha to taste. Serves 4.