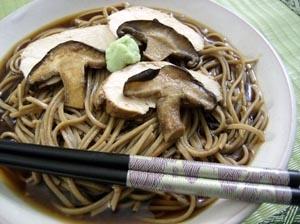 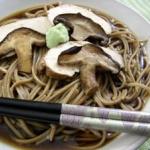 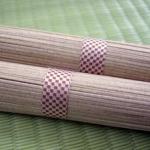 The New Year in Japan is the most important holiday of the year. In addition to the many rituals associated with the Japanese New Year, there are also many traditional foods. They include mochi (pounded rice dumplings), osechi (dried, pickled and fermented foods that will keep for days so the lady of the house can enjoy a respite from the kitchen), and Toshikoshi Soba (long buckwheat noodles in broth with various toppings). When translated into English, "toshikoshi" means "year passing", and these savory and satisfying noodles are a tasty tradition to be enjoyed at midnight on NewYear's Eve.

There is no specific recipe for Toshikoshi Soba, although for this occasion, they are typically served hot rather than cold. The broth might be green tea, or the kelp and bonito stock called dashi, or a special broth called tsuyu, flavored with soy sauce, sugar, and rice wine. And sometimes, the milky leftover water used for boiling the soba is added to the sauce.

Toppings for soba noodles might include finely chopped scallions, bits of seaweed, spinach leaves, grated yam, slices of kamaboko fish cakes, mochi dumplings, golden fried tofu (which makes it Kitsune Soba), bits of crispy-fried tempura batter (which makes it Tanuki Soba), or a raw egg (which makes it 'moon-viewing' Tsukimi Soba). So choose your favorite broth and toppings, and enjoy. Here is one very tasty idea:

Transfer noodles to individual serving bowls. Slice the chicken breasts crosswise, arrange the slices on top of the noodles and add mushrooms. Ladle the broth over the noodles and garnish each dish with a pinch of wasabi paste. When ready to eat, stir the wasabi paste into the broth with your chopsticks and enjoy. Serves 4.

The base for many Japanese soups is a stock called dashi. To make dashi, you will need:

Rinse or wipe the dusty coating from the surface of the kombu and place in a pot with 6 cups of water and bring to a simmer. Just before the water comes to a boil, remove and discard the kombu. Add the katsuo-bushi and bring just to a simmer again. Remove the pan from the heat and allow it to cool. Strain the liquid into a separate container and discard the katsuo-bushi. The remaining liquid is called dashi and can be used as a base to make a wide variety of soups and dipping sauces.