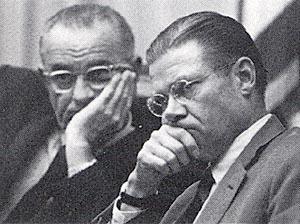 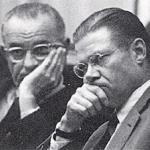 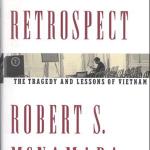 "What we call evil is simply ignorance bumping its head in the dark." - Henry Ford

The Vietnam War has been called "McNamara's War", after Robert S. McNamara, who was secretary of defense under the Kennedy administration and most of the Johnson administration. McNamara was a graduate of UC Berkeley and Harvard, president of Ford and the World Bank, a mountain climber and a social climber. He was a "Whiz Kid", one of the "best and the brightest", the brainiac who popularized the body count in the belief that everything quantifiable in war (and everything else) should be quantified. McNamara would ultimately quit or be fired - he's still not sure which - over his growing conviction that America could not win in Vietnam. And he would later write in his memoir In Retrospect that he and the two administrations were "wrong, terribly wrong."

In Retrospect was originally published in 1995, exactly twenty years after the last Americans left Vietnam. Reactions to it were generally of two types - "Sorry, too late," and "Let the healing continue." It's understandable that a man nearing eighty would want to wash his hands of all the suffering he has caused. What remains unclear is how a man of such extraordinary intelligence - McNamara scored in the 100th percentile on various aptitude tests -- could have persisted for so long in the following delusions:

The domino theory: Communist takeover of South Vietnam would imply Communist takeover of Southeast Asia if not the whole world. It would be just as foolish to believe that the introduction of capitalism and democracy to, say, Cuba, would imply its spread worldwide. Or that the establishment of an Islamic theocracy in Iran would imply theocracies popping up everywhere. Politico-economic systems are not forms of infectious disease.

A government can be defended using external military force even when the government is incoherent, dictatorial, and helpless. I refer, of course, to the Government of South Vietnam.

Ho Chi Minh was first a Communist, and only second a nationalist. McNamara more generally underestimated the degree to which nationalism - or tribalism - guides revolutionary movements.

McNamara was smart, but intelligence is nothing without experience. When he became defense secretary at the age of forty-four he knew virtually nothing about defense or Vietnam, and he was surrounded by people equally ignorant. In some respects the innocence of the Kennedy crew was what made it so unique and inspiring, but also dangerous.

Of course there were reasons why McNamara knew so little about Vietnam, not all of them his fault. One was that, as a man charged with defending the world's most powerful nation, he had other countries to worry about. Henry Kissinger would later use this same excuse of constant distraction when explaining why America condoned the bloody Indonesian invasion of East Timor in 1976. During McNamara's tenure occurred the botched Bay of Pigs invasion, the Cuban Missile Crisis, and the Israeli Six-Day War, to name a few. In In Retrospect, McNamara also notes another source of ignorance, and notes its irony: experts on East and Southeast Asia had been purged during the McCarthy era for being Communist. The Americans could not win: they did not understand their enemies, or even their friends.

For example, McNamara was dismayed to learn that the South Vietnamese often reported "what they believed the Americans wanted to hear." This would not be so surprising to someone familiar with the region, where honesty is commonly sacrificed for expediency. As for the domino theory, in some sense this is merely a more sophisticated version of the Yellow Peril, the idea that Asians or their institutions are constantly threatening to engulf the West. Finally, McNamara and indeed most Americans overestimated the importance of freedom and democracy to the Vietnamese, while underestimating the importance of things equally intangible: filial duty, harmony between heaven and earth. And perhaps most importantly, independence. To McNamara's credit, he did tell Kennedy that he felt unqualified for the job, but his sense of patriotic duty (and, I expect, simple pride) swayed him into accepting it. This points up an obvious fault with the American system: the only qualification for a cabinet post is presidential favor and Congressional approval.

Some of the more interesting passages of In Retrospect are those describing the usually "clumsy" - McNamara's word - American diplomatic efforts. The passages tend to suggest that the North Vietnamese had no genuine desire to accept any terms short of total independence, and McNamara strikes me as foolish to have believed otherwise. But he does mention the interesting fact that in 1963 Charles de Gaulle had proposed that Vietnam be reunified and neutralized. This would have meant de facto domination by the more populous north. But lest we forget, domination by the majority is a corollary of democracy. Indeed, the Geneva Accords that originally divided Vietnam stipulated eventual reunification and national elections. But the United States has never cared for left-leaning foreign governments, especially when they are popularly elected, because in that case all the rhetoric about oppression holds no water. In any case, had de Gaulle's proposal been taken seriously, ten years of bloodshed might have been avoided.

Throughout In Retrospect McNamara and others continually find themselves facing the impossibility of victory while dreading that defeat would cripple American prestige. And it did, but not to the extent that they had imagined. Indeed it could be argued that American prestige was harmed less by the defeat than by the war's atrocities. The U.S. Armed Forces came to inspire fear not from their effectiveness but from their excessiveness. Countries still expected America to come to their aid in times of need; they were just afraid that it might do more harm than good, whatever its intentions.

This matter of intentions is precisely what makes In Retrospect such an irksome read at times. McNamara never explicitly asks for forgiveness, but neither is he capable of attributing base motives to anyone, least of all himself. It is possible, for example, that Lyndon Johnson's gratuitous and demonstrably counterproductive bombing of North Vietnam was simply punitive; the war was a thorn in his side, and where better to vent his rage than on what he called the "damn little pissant country" of Vietnam? Even the generals who advocated the use of nuclear weapons on the country are showered with accolades. No one is a racist; no one is primarily concerned with furthering his own career; all are true patriots, the Right Stuff. But this is perhaps to be expected. A man as shamelessly ambitious as McNamara cannot afford to offend his exalted friends. Even the CIA comes out looking pretty good.

On a related note, the book could probably do without McNamara's demonstrations of his charmed life. A photograph shows him, his wife Marg, and Jackie Kennedy arm-in-arm, all Colgate smiles. The caption reads: "On the day I left the Pentagon, Marg and I went to Aspen for a month of skiing. We interrupted our holiday to attend a brief meeting in the Caribbean. On the way back, while passing through the Miami airport, we ran into Jackie Kennedy. It was a lovely surprise for all of us." Why, it must have been! But I know that McNamara's book was read by many Vietnam veterans who hated him, and he must have known this when he wrote it, so is he anything but callous for including this "lovely surprise"? McNamara also reports that while men were dropping like flies in the jungle, he played a lot of squash.

At least one critic has deemed In Retrospect an "act of courage". I have my doubts. Admitting that you fucked up twenty years ago is not as difficult as it may seem. And now that most Americans believe the war to have been a mistake, an act of courage would be to say otherwise. What's more, McNamara knew that the war was a mistake when he was still secretary of defense; he could have resigned in protest but he didn't.

So the book is less an act of courage than an act of contrition. But it is no less valuable for that, especially as America continues to involve itself in scenarios comparable to the Vietnam War. In an appendix to this edition, a journalist asks McNamara to summarize the war's lessons. McNamara replies: "Put very simply: don't midjudge the nature of the conflict. Don't underestimate the power of nationalism....Don't overestimate what military forces can accomplish - they can't reconstruct a 'failed' state. And don't act unilaterally unless the security of our country is directly threatened." The interview took place in 1995. Poor Bob. How helpless he must feel to see this "McNamara doctrine" defied on almost every point by the Bush administration. Guess we'll have to wait for Rumsfeld's memoirs.

Review of Robert S. McNamara's In Retrospect: The Tragedy and Lessons of Vietnam, Vintage, 1996.