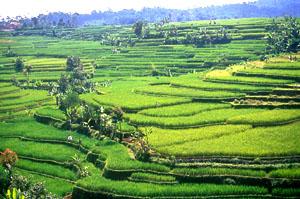 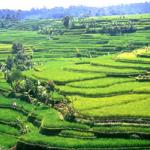 It is, as usual, a feast and celebration day on Bali. Isle of the Gods, Land of the Lotus eaters, this fabled paradise dangles like a resplendent emerald on the necklace of islands that make up the Indonesian archipelago.

This time it's the festival of rice, one of Bali's most revered. For rice is the staple of the archipelago, and it's cultivation and harvest is an integral part of the ancient community.

A procession of colourful women weave through the rice paddies, bearing gifts for the gods. Spectacular pyramid-shaped towers of fruit, rice and flowers are balanced effortlessly on their heads, as they glide past smoking coconut shells to the ornately carved stone temples that dot the island. They light their bristles of incense, remove their sandals and kneel at the feet of the flower-bedecked shrine, to have their offerings blessed by the village priest.

Against lurid or clear skies, the vivid patchworks of land are splashed with bright colours of people working the fields. Bent double, they hoe, plant, reap and sow. The green gold of the land clings to mountainsides, cascades down valleys and meanders across flat plains. Ancient temples reach for the sky, volcanoes hiss, and lakes and jungles teem with a profusion of exotic wildlife. It's hard to imagine the urban antithesis, the choking skeins of traffic that are the yin to the yang of rice. But it is the image of hallucinatory green rice paddies that, more than anything else, pervade the eye at every turn.

Rice arrived in Indonesia from India about a thousand years ago. Weaving through religious beliefs, mythology and superstition, it's the staple food and the fulcrum of their community and economy. Most of the country's rice grows in the geological cocktail of Java's high temperatures and humidity, tropical rain and volcanic activity.

The carbohydrate rich staple is so important to the life cycle of the Indonesians, that it even has its own place in the language. It is not just bleached, boiled and then swallowed as it is in Western cultures, but it's a padi in the field, gabah when it's unhulled and unhusked, beras after it's been husked and hulled, nasi when food. Irrigated plots, constantly submerged under ponds of water that glitter like mirrors, are called sawah and dry fields are adang.

Small baskets of offerings containing burning bristles of incense and a pinch of rice, some money and flower petals, are placed at the entrance to shops, temples, houses or gardens, to request, thank, or appease the gods. Many Indonesians usually leave a spoonful of rice on their plates at the end of the meal to thank the patroness of rice, the Hindu Goddess, Sri Dewi.

Rice is the most widely cultivated cereal in the world and, in Indonesia, forms the basis of all meals. It is always eaten cooked, either hot or cold, or as a savoury dish, and often served in a banana-leaf parcel.

But rice is not only grown to fill the belly. Rice bran yields an oil similar to ground nut (peanut) oil, and brem is a potent rice-wine made from glutinous rice and coconut milk.

Children and adults dot their foreheads with rice. For weddings, holy days and political events, rice is coloured and moulded into bas reliefs of mountains, peoples' names, flowers, Vishnu, elephants or dragons.

Wherever rice grows in Indonesia, planting cycles are celebrated in spectacle and ritual, events as old as the land itself.

In Sukabumi, Java, rice is harvested to the beat of fighting drums. The cutting of the tumpeng, a cone of rice, is an indispensable part of special occasions and events from weddings to rituals.

Farmers on Madura, across from Surabaya, sponsor bull races after the harvest. It's a time of wild betting, when jockeys, primed with eggs, honey and arak, the potent local rice brandy, balance on ornate wooden harrows attached behind the bulls, and thunder through the unploughed paddies wielding batons and incanting magic words to make his bull reach the finishing line first.

In Yogyakarta, the cultural capital of Java, in preparation for the Tumplak Waji Geregeg Sawal festival, locals build mountains of rice, decorated with vegetables, eggs and cakes, while the hypnotic sounds of the gamelan orchestra ward off evil spirits that may infect the town. At the end of festivities, the mountains of offerings are dismantled and donated to the poor.

The people of Torajaland believe that rice is also symbolic, for their legends say that Puang Matua made the first man, the first rice and the first buffalo on the same day - three brothers, kin in creation. Here, seeding of the fields and thinning of the shoots, is accompanied by song and prayer.

At flamboyant cremations, the traditional fiery send-off of the Balinese, relatives of the departed pack parcels of rice into the bull-shaped coffins, along with clean clothing and money, to ensure the needs of the departed will be met on his journey to beyond. And a Javanese child receives seven kinds of rice cooked with coconut milk and brown sugar, to ensure its welfare and good health, during the commemorations of his birth that occur every 35 days in babyhood.

The cultivation of rice itself is a slow, meditative process, passed down between generations. Rice is traditionally farmed by hand, stalk by stalk and sheaf by sheaf, so as not to injure its soul. Legend believes that each stem of standing rice must be cut separately, the reaper approaching with the knife concealed in his palm, so that his brother, the rice stalk, should not see the blade coming and be afraid.

When the soaking equatorial rains flood the baked, cracked rice terraces, they are ploughed by pampered buffalo. Then women, men and children stoop in the deep mud to plant the tender new shoots, until the countryside is dotted with bright green bristles.

Stalks are cut with heavy sickles, and the stumps burned. Smoke envelops groups of tired workers, the skies blaze orange and fields become a haze of smoke. It's a happy time for the harvesters with much singing and laughter, and every member of the family participates where possible.

Sheaves are tied in bundles to dry on rooftops and roadsides. Whole villages become large drying areas. There is the constant sound of pounding and threshing as the grains are separated from the husks, and the languid air becomes heavy with dust.

The gamelan orchestra is as symbolic with Indonesia as its volcanoes, and some musicologists believe the sound of rice being pummelled against wood, rhythmically tossing the bamboo stick from hand to hand, may have initiated the gamelan.

The dried rice grains are then packed into hessian bags, thrown into the backs of wooden trucks, trundled down the mountains, and taken to market. Millions of people will feast on nasi goreng, nasi puti, or coloured rice cakes in simple and exotic concoctions. Rice will be used in a child's blessing; it will float out to sea with a sprig of orchids, and decorate a footpath.

But there'll always be the line of women, dressed in brocade blouses, cummerbands and sarongs of glittering ruby, gold and emerald, making their way to the temples to give thanks to Sri Dewi.

And the cycle of rice and ritual will continue for another season.