Of Rice and Zen: The Essentials of Japanese Cuisine 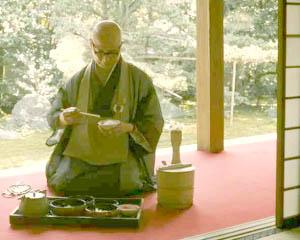 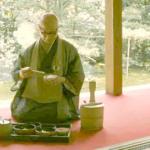 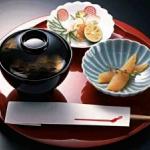 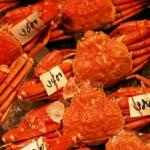 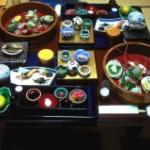 With the ubiquitous sushi bar springing up in such out-of-the-way places as Omaha Nebraska, Jackson Hole Wyoming, Plano Texas, and Fairbanks Alaska, one might be tempted to assume that's all there is to Japanese food: raw fish and rice. Ah, but then let's not forget Benihana, with his glitzy griddles and flying knives. Yet, for all their ambiance and mass appeal, sushi, and teppan yaki are but two of the hundreds of dishes and delicacies that Japanese cuisine has to offer. And although Japanese food may be an acquired taste at first, once acquired, it can become an obsession.

Rice is such an integral part of Japanese life and culture that the word for meal, gohan, is synonymous with the word for rice. It is the foundation of the nation's sustenance, and no traditional meal is served without it. However, in Japan, a simple bowl of rice is anything but. There are numerous varieties of rice, each with its own characteristics and purpose; the agribusiness of rice production in Japan is steeped in controversy; and the preparation of rice is a precise and exacting art. And yet, as it sits there in its snowy simplicity, nothing is more satisfying and sustaining than a perfect bowl of Japanese rice.

Following close on its heels as an essential element of Japanese food is the soybean. Known as daizu, the word literally means big bean, and is used to make such staples as tofu, a soy cheese, miso a fermented bean paste, aburage,a fried omelet, and shoyu, Japanese soy sauce.

Seaweed is another important component of Japanese cuisine, and there are dozens of varieties that help give the food its unique flavor. Much of the seaweed used in the preparation of Japanese dishes is dried, from the broad spears of konbu used to make savory stocks and broths, to the delicate flakes of wakame sprinkled in soups, and the crisp sheets of nori wrapped around makizushi. Sometimes, seaweed such as mozuku is eaten all by itself as a side dish.

And of course, traditional Japanese food features an array of indigenous vegetables, such as leafy greens, beans, gourds, yams, eggplant, peppers, mushrooms, bamboo, and root vegetables such as radishes, yams and lotus, many of which are often served pickled or fermented.

As an island nation, Japan relies heavily on the sea as a major source of protein. The surrounding waters offer an abundant assortment of fish, mollusks and crustaceans that supply another delicious and colorful component of Japanese cuisine. In addition to garden variety fish such as tuna, salmon, halibut, snapper, mackerel and herring, the Japanese also serve up such curiosities as roe, eel, octopus, squid, sea urchins and snails, to name just a few.

Common meats include poultry, beef and pork, although a scarcity of farmland makes raising livestock problematic, and the meat, therefore, expensive. Chicken is abundant however, as are eggs; and the impracticality of raising cattle notwithstanding, Japan produces some of the world's finest beef.

Traditional beverages to accompany a Japanese meal include ocha, Japanese green tea, biru, Japanese beer, and sake, Japanese rice wine. Beer is by far the beverage of choice in Japan, and green tea, much like rice, is an essential component of every meal.

Enjoying a variety of bite-sized foods over cold beers and hot sake is one of the best ways to relax in the company of friends and family. Japanese appetizers run the gamut from blanched soybeans called edamame, and crunchy rice crackers called sembei, to simple steamed shellfish, tiny deep-fried river shrimp, and tofu cubes with soy sauce and bonito flakes.

A favorite way to begin a Japanese meal is with a light vinegared salad made with cucumbers and other fresh vegetables, sometimes mixed with diced seafood such as crab, octopus, or shrimp and sprinkled with sesame seeds. A simple marinade of rice wine vinegar, soy sauce and a few drops of sesame oil makes an excellent dressing.

Japanese soups tend to be light and clear, made with a soup base called dashi. This basic stock, steeped with dried kelp and smoky dried bonito shavings, is the foundation for Japan's most common soup, miso shiru, which consists of dashi, miso paste, flakes of dried wakame seaweed, and cubes of firm tofu.

The simplest of all Japanese dishes is sashimi, several perfect slices of the very freshest raw fish, garnished with a chiffonade of daikon radish. Favorite varieties of fish for sashimi are tuna, yellowtail, snapper, and salmon. For the more adventurous diners, the potentially deadly blowfish called fugu is a popular delicacy, and even kujira, the raw flesh of the whale!

Perhaps the most widely recognized of all Japanese food, sushi is the categorical term for a variety of dishes made with vinegared rice, of which there are several basic types:

Nigiri sushi - Served in pairs, this style of sushi consists of slices of raw fish placed atop oblong balls of vinegared rice.

Makizushi - This variety is composed of vinegared rice and seafood, wrapped cigar-style in a sheet of nori paper and sliced into bite-sized pieces.

Temaki - Same ingredients as makizushi, but rolled into a loosely filled cone of nori.

Chirashi - Any or all of the typical ingredients of sushi, but instead of being fashioned into bite-sized bits, they are simply placed atop a bowl of vinegared rice.

Japanese cuisine also features several types of noodles and a wide array of ways to prepare them. They are an especially popular fast food in Japan, as they are quick, nourishing and economical. The three most popular types are:

Soba - Thin brown buckwheat noodles, served in a light broth with or without added toppings. Soba, served cold, is a tasty summer treat.

Udon - Thick, white flour noodles served in a light broth with a variety of toppings.

A simple, homestyle dish, donburi is a bowl of steamed white rice, topped with various types of meat, fish, tofu, or vegetables.

These tasty treats are often marinated in teriyaki sauce and served up on skewers. Almost anything can be prepared in this fashion, including cubes of chicken, beef, fish, vegetables or tofu, as well as a chewy rice dumplings called omochi.

Perhaps one of the most overlooked categories of Japanese cuisine are the savory hot pots known as nabemono. A simmering pot of broth is usually placed on a burner in the center of the table with plates of various raw meats and vegetables, which diners poach, tend and serve themselves.

Nabe - This hearty meat and vegetable stew is a favorite food of sumo wrestlers. And although the ingredients vary from one recipe to the next, the basics might include chunks of meat or seafood, carrots, potatoes, sea kelp, Chinese cabbage, shitake mushrooms, and cellophane noodles, all poached in a savory broth, which simmers over a burner in the center of the table.

Shabu-Shabu - Named for the swishing motion made by the chopsticks of the diners as they cook the various ingredients of their individual portions at the table, the components are similar to those used in nabe, with the exception that the meat is usually beef, sliced paper-thin for quick cooking.

Sukiyaki - Another of Japan's hot pot dishes, sukiyaki includes thinly sliced beef, cellophane noodles, cubed tofu, mushrooms, bamboo shoots, and leafy greens such as spinach or cabbage. Once the ingredients are done simmering, they're removed by the diners one bite at a time and dipped in a raw egg.

Mizutaki - A do-it-yourself hot pot made with chicken, tofu, fresh vegetables and sea kelp in a soy lemon broth.

Japanese cuisine includes a tempting array of vegetables and many interesting ways to prepare them, including steamed, deep fried, poached, grilled, pickled, marinated, and aged in miso. And although modern agriculture provides Japan with an abundant supply of nearly every vegetable imaginable, there are a number of indigenous seasonal favorites such as delicate spring greens, soybeans in the pod, wild mountain yams, and matsutake mushrooms.

Mochi - Pounded rice. This unusual food is prepared using an age-old technique in which cooked rice is placed in a stone mortar or a hollowed out tree stump and pounded with a wooden mallet until it forms a large, doughy dumpling. Mochi may be served as-is in little rolled balls, or poached in soups, grilled on skewers, or sugar coated for a sweet treat. Because of the doughy consistency of mochi, many unfortunate people choke on it every year. So it is best eaten in small bites with caution.

Kaiseki Ryori - Tea Ceremony Foods. The Japanese tea ceremony features its own special cuisine. Choosing the menu is a highly subtle and evolved art, which takes into consideration the nature of the occasion, the season of the year, the time of day, and the aesthetics of the setting. Foods are prepared not only according to their flavors, but also for their significance.

O-Sechi - New Year Foods. New Year's Day is Japan's most important holiday. After staying up late to hear the 108 tolls of the temple bell on New Year's Eve, on New Year's Day, the Japanese people pay a visit to the local temple to pray for health and prosperity in the coming year. Special cold foods called O-Sechi are prepared in advance and placed in elegant lacquered boxes, so that Japanese wives and mothers will not have to cook or clean on New Year's Day.

The beauty of Japanese cuisine is its zen-like simplicity. No fussy sauces, no overwrought concoctions, no pretentious contrivances. Just the freshest seasonal ingredients harmoniously combined to please the eye as well as the palate.

But beyond the quality of the ingredients and their preparation is an inherent attitude of reverence, respect, gratitude and a sense of joie de vie toward food, and toward life itself. When it comes to Japanese food, think Clean, Fresh, Simple, Alive!