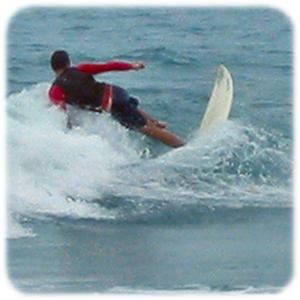 Power Slide off the Taiwan Coast 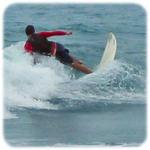 Surfing is not a choice listed on the "reason for visit" section of the disembarkation card handed out on Taiwan-bound flights. Despite the obvious fact that Taiwan straddles the Tropic of Cancer in the Pacific ocean, only a handful of people even know that Taiwan has a surf scene. And Taiwan's small, dedicated, and thoroughly amped surfing community would have it no other way.

Like most sports which requires the constant cooperation of mother nature, good surfing requires a high degree of being in the right place at the right time. Right places are few and far between; sweet spots that have the waves without the crowds are even rarer. Nothing kills a good beach faster than overcrowding. While my guide into the world of surf was happy to lead me into tubular illumination, they asked that I not reveal the whereabouts of their beach. There are many well-known surf spots along Taiwan's East Coast - Dashi in the north, and Kenting in the south. Non-surfers reading will have to forgive my vagueness when I identify the beach where most of this story takes place as "in the boondocks, somewhere between the two". Those familiar with they myriad mysteries of the surf will understand completely the need for discretion.

I meet up with Pete, my guide into surf, at a pub in a city not far from his home. Pete lives a few miles away from the city, in a small town on he picked out specifically for its proximity to what he calls "some of the best surf in Taiwan." Our plan is to have supper in town and head home to hit the sack early and wake up at dawn to scope the conditions, but he decides to race home for some dusk surfing. Of course, I think he's crazy already, as the sun is already almost down, but I'm just along for the ride. "You've gotta catch the waves when you can," Pete tells me, jumping onto his motorcycle (specially designed with a side-mounted surfboard rack, naturally), and I follow him back to his house.

We get back, and Pete grabs a long board and runs towards the beach. I follow along, leaving my camera at his house, already being too dark for outdoor photography. The beach we're on is not white sand, as I'd expected would be ideal for surfing; rather, it is a rocky, curving stretch of seashore, difficult and uncomfortable to walk along. Pete disappears into the gray, churning mass that stretches out endlessly, and I sit listening to a sound quite unlike any I've ever heard, that of the undertow pulling millions of small stones into the sea, while the tide pushes millions more back against the shore. The endless crackling and popping makes me feel as if I'm sitting on the edge of an enormous bowl of giant-sized rice krispies.

Eventually, Pete comes back. "Once it gets too dark to see the waves its pretty much impossible to keep surfing," he tells me. We head off to a local dumpling shop, where over a plate of dumplings and cho dofu, I grill Pete over what factors make for good surfing. It turns out to be more complicated than I thought.

"There are lots of factors involved" he tells me" average wind direction, what the conditions under the waterline are. One of the reasons that the beach I surf is so good is the rockiness of the area. Another factor is the shape of the shoreline itself." Before the sun went down, I'd noticed that the spot where Pete spent his time was just off of a graceful outward-extending arch of coastline. The curve, I'm told, forms a beach break under the water, a place where the waves will break fairly regularly and predictably.

"That's the spot where we spend most of our time. That's why we kind of need to keep it from becoming public knowledge."

Gorged on dumplings, we head back to his place and listen to music. The operative plan is to wake up at dawn and see what the surf looks like, so we try to get to sleep early. Two other surfers show up at the house at around 4 AM, fresh off of their night jobs tending bar in a nearby city. "The waves look pitiful," one mumbles before crawling into their sleeping bags, and everybody agrees to sleep late and wait for the tide to go out in the afternoon. This is, I'm told, prime time for surfing.

Predictably, everyone is still crashed out at seven, so I take my motorcycle up the coast to get some tea. It's a brilliant day, and the sea is nearly flat, no swell at all. At nine, the ocean is showing some motion, with a few bumps forming here and there. Even I know that this isn't enough to wake the sleeping surfers over.

Sometime in the early afternoon, the story has changed. Small and medium sized waves are crashing down regularly on the shore, and after a quick look, the assembled crew decides to go for it. My first surfing lesson is about to begin. Pete hands me a short board, and I follow the rest of the surfers into the water.

Just getting in is a chore. While the rockiness may make for good surfing, it definitely hinders getting in and out of the water. Forget about the full sprints into the waves that you see on "Baywatch, this is more like treading over a minefield. Once I'm in, the ocean itself seems not to want me, pushing me back a step for every two I manage to take forward. Finally, I get to a point where I can lie down on the board and begin paddling. Its incredibly taxing, and long unused muscles begin protesting almost immediately. The crew is way ahead of me within minutes, and while they're relaxing on the higher seas, I'm scratching, desperately trying to paddle fast enough to get myself out of the zone, the place where the waves come crashing down. Nose pressed against the board, I keep paddling, hoping to get past the dump zone. My technique is all wrong. Maybe I should try?

I'm wrapped around the board, tumbling around inside the crashing water like a sock in the spin cycle. I wind up under the board, pushed back to the point where I my feet are touching rock. Before I have time to contemplate this

Another wave crashes down over me, pushing me even further back and ripping the board out of my hands. Thankfully, the Velcro leash strapped around my ankle holds, and I'm able to pull the board in and paddle back out. The rest of the surfers are already way ahead, looking out for incoming waves. The two that had just pummeled me weren't big enough for them to even bother riding.

I had thought the toughest thing about surfing would be standing up on the board. Theoretically, that might be correct, but at the rate I was going, I wasn't going to get the chance to find out. Eventually, I manage to paddle out past the break zone, and find myself prone on the board, not too far off from the take off point, the place where the other surfers are getting ready to ride the approaching waves. Now I'm ready to hang ten.

Not Quite. Possibly the most famous of surfer slang, "hang ten" means to keep all ten toes on the nose of the board (possible only with a long board). What I do is more like "hang onto the board for about ten seconds before getting pitched off." This, in itself, feels like an achievement.

After about a half an hour, I've managed to body surf on a few of the smaller waves, but the amount of work I'd had to do to get to the waves has left me exhausted, and the inevitable pummeling at the end of the wave has left me drained. I decide to bail out while I still have the energy to crawl up the rocks, leaving the surfing to those who know how to handle it. Later, sitting on the beach watching the crew surf away the afternoon, I come to a the conclusion that, despite what "Baywatch" would have us believe, surfing is indeed hard work, best left to those dedicated the sport.

(If there is no surf, invoke sea work in the following manner:
arise, arise you great surfs from Kahiki)