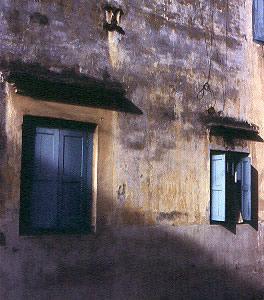 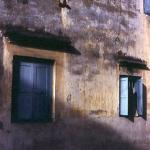 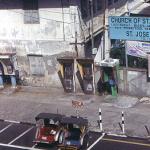 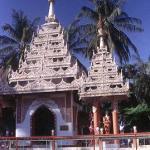 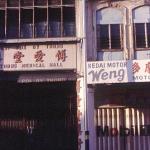 History lives in the colonial streets of this multifaceted town, the capital of Malaysia's Penang Island. What immediately strikes the first-time visitor to Georgetown is the seemingly endless number of Anglo-Indian and Chinese shopfronts rolling across town, some freshly painted, some solidly time-worn and others simply succumbing to time.

Georgetown is a place for all the senses. Take a deep breath and depending on which part of town you're in and what the time of day is, you'll scent a thick waft of incense, perhaps followed by a wave of eye-stinging fried chilli, and then the sweet aroma of an Indian hand-rolled cigarette.

There's the drift of the call to prayer heard intermittently throughout the day, and the slow creak of trishaws ridden by wizened men with sinewy muscles and hopeful faces as they brake to slow down while cruising past a pedestrian. These men look like they could be from one of any number of countries across the globe; but ask them where they're from and they'll all answer "Penang".

Georgetown is a microcosm of world cultures: migrants have settled here from as far afield as Europe, China, India, Indonesia, Burma, the Middle East and Thailand.

The isle was 'founded' in 1786 when Francis Light established a British trading post there for the East India Company. Light negotiated a treaty with the Sultan of Kedah, even though there were already people from Kedah living on the island. The British offered the Sultan military protection from those marauding Thais and Burmese in return for the island, but confusion over the precise terms of the treaty lingered and caused occasional tension. The island gained independence in 1957, and joined Malaysia in 1963.

Today Georgetown has the largest number of old houses standing in Southeast Asia: something like 12,000 pre-war houses remain in use. The British passed legislation banning the eviction of original tenants and controlling rents, and this is cited as the main reason behind the streets being a living museum. The legislation was recently repealed, and it was a topic of conversation the locals warmed to while I was there.

Some said it was about time, as the owners of the shophouses had been unable to make a cent out of their properties for more than half a century, while the original tenants had often sublet at market rates. Others said many tenants, particularly in Little India, had put a lot of money into maintaining their buildings, and were now being turned out without any compensation. Regardless, it will be interesting to see what happens to the buildings with this statute change taking effect.

Two days is a good amount of time to browse the historical sites and sample some of Penang's fabulous cuisine. I spent a morning walking through the lush 29-hectare Botanical Gardens, a short number 7 bus ride from the centre of town. Opened in 1884, the gardens have suffered fluctuating standards of care, but today they are a popular spot for fitness freaks and picnickers alike.

Back in town, I hopped off at Komtar (Kompleks Tun Abdul Razak), the piece de resistance of Georgetown's 20th century architecture. The 58-floor tower has a shopping centre at its base. Unfortunately the beige tiled walls lend the atmosphere of a railway-station toilet to the entire centre, and when wandering around the labyrinth of corridors you might be forgiven for thinking you haven't actually arrived at the main centre yet. Welcome to Komtar.

The saving grace of the building is its height. The viewing gallery affords a 360 degree vista of Georgetown and some of Penang. There's a good view of the 13.5 kilometre Penang Bridge, one of the longest in the world, linking the island to the mainland - along with the nearby distinctly-coloured sewage outfall.

Georgetown is largely about food. There could never be enough time to sample all the delectable delights in town and in fact you'd be lucky to even cover the main groups of Penang's diverse cuisine in just two days. But you can try.

I started with one of the island's favourite Nyonya dishes, laksa. "Nyonya" is the word used to describe both the Chinese women who have adopted the Malaysian way of life while maintaining their Chinese heritage, and the unique cuisine that these women developed. While the style of cooking exists among the Chinese in Penang, Malacca and Singapore, in Penang Nyonya cuisine has been influenced to an extent by Thai cooking, with chillies, fresh herbs and shrimp paste being popular ingredients.

Laksa is hawker fare. Mine set me back a whole 2 ringgit at a shopfront restaurant on Jalan Penang, and was divine. Its base is rice noodles and these swim in a sour-based fish soup topped with onions, chilli, cucumber, pineapple and a pungent fish paste. It's a refreshing variation of Thai noodle soup.

While slurping my laksa I witnessed a mobile phone theft. A motorcycle-helmeted man lurked for a while between tables in the restaurant before making a leap for the phone and dashing out into the street. The victim rushed out after him; his friends looked at each other and shook their heads. Then they kept slurping their laksa. It's that good.

It can be tempting to while away the afternoons in cafes, but pounding the pavement yields plenty of rewards. I took a wander down Lebuh Chulia, named after the chulias, or South Indian Muslims, who settled here in the early days. The street is probably as close as one gets to Khao San Rd in Georgetown, with cheap hotels, travel agents and foreigner-friendly restaurants lining the street, but there the comparison ends: the street has retained most of its original architecture and is far from a tourist ghetto.

From here you could head to Fort Cornwallis on the water, the island's original feeble attempt at defence (if I was the Sultan and had seen this attempt at the British side of the bargain, I would have been upset too), via the Victoria Memorial Clock tower. The tower was given to the island by a local Chinese millionaire to commemorate the diamond jubilee of Britain's Queen Victoria; by the time it was completed she had died, and today it has a slight lilt caused by bombing during World War II.

Or you could stroll around the quay area with its more majestic examples of architecture, or perhaps just browse in the shops. You should definitely make an effort to get to the Penang Museum, housed in the former Penang Free School - the first English-language school in all of Southeast Asia. It's well set up and gives an excellent potted history of the island for the beginner.

What you must do the following morning - early, while the light still paints the buildings with gold, the traffic is thin and the heat is yet to escalate - is hire a trishaw for a tour of the sites you missed the previous day (30 ringgit per hour, negotiable). The trishaw first appeared on the island in 1941, and by 1947, 2,000 of them were plying the streets for fares.

Today they are outsped by pretty much anything else, but there's no better way of taking in the charms of the town. Tell your driver how long you have and he'll know where he can manage to peddle you - two hours will allow you to visit plenty of sites, as well as Wat Chayamangkalaram, a Thai temple whose grounds were given to Penang's Thai community by Queen Victoria in 1845. A 32-metre reclining Buddha lies inside.

Before your two days are up you might try squeezing in an excursion to Penang Hill, a favourite expat retreat in colonial days, or a visit to Kek Lok Si temple, which took Thai, Burmese and Chinese artisans around twenty years to build.

But if I were you, I might just settle for another laksa.

The Bettering of Bangkok