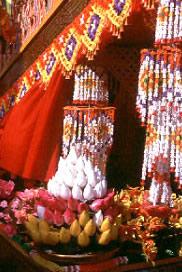 A float in the Yasothon parade, Yasothon, Thailand. 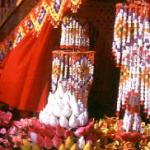 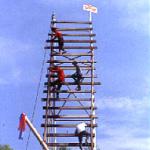 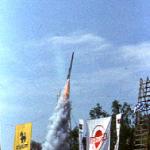 It's a centuries-old festival practised right across Isaan. It's dangerous, it's breathtaking and it would quite probably be illegal anywhere else in the world.

It's Bun Bang Fai, the annual rain-making-by-rocket festival, and the place to be for it is otherwise unassuming and peaceful Yasothon. Villagers from surrounding districts converge here each year with their communally-built rockets to launch in a fiery display of pyrotechnic skill and mayhem.

The festival happens in early May, the steamy beginning of the northeast's monsoon season, and the rockets are sent to the gods in order to remind them to bless the area with the right amount of rainfall. The rockets are also an excuse to get together with your mates to stuff a six or seven metre length of blue PVC pipe with - reportedly - up to 200 kilograms of explosives. Add a tail of bamboo with which to tie the rocket to the pad, and you're ready to demonstrate that your team has the skill to shoot a rocket higher than the stars. The collective effort rewards everybody when it rains; but the festival trophy for shooting the highest is what the individual teams are lusting after.

While the festival focuses on the launch of the rockets, there's much more to it than that. It's a weekend-long event commencing early Friday afternoon, when each team sets up a stage along the main street complete with sound systems that put stadium-playing rock musicians to shame. The singing, dancing and general exhibitionism is going strong by sundown, as is the consumption of whiskey.

Later the party will move on to a fair on the edge of town, complete with ferris wheel, dodgems, discos, and a monument to motorcycle daredevilism. A practice banned in some countries, motorcyclists zip around the inside of a two-storey-high wooden barrel, with an audience watching from above. I find it difficult to keep my balance as the rider thumps past centimetres away and shakes the wooden palings holding everything together.

By early Saturday morning, the dancing and singing in the streets is again underway, and preparations for the day-long parade of rocket floats and dancers is almost complete. Each team constructs a float for its rocket, and the styles vary dramatically-from a basic pickup truck carrying a scarecrow, farm produce and Thailand's famous triangular pillows, to elaborate paper-and-fruit constructions with vehicles somewhere underneath them. It's clear that this part of the event is taken as seriously as the making of the rocket itself.

Each team also enters a troupe of dancers and musicians, who will perform traditional Thai dancing along the route of the parade. The marshalls have their work cut out for them in the heat: they've been laying out carpets of hessian along the melting asphalt road all morning so the dancers will be able to dance elegantly in bare feet instead of just hopping from one foot to the other.

The floats continue throughout the day, and by sundown it feels like half of Thailand has danced or driven past. The dancing on the stages takes off again-the Post Office's team is really getting down and boogying-and the occasional elderly woman waving a wooden phallus can be seen joining in the sanuk, or fun. In yesteryear, the festival was also a fertility rite, and sunglass-wearing, phallus-toting women dressed as men were a prominent feature. Somewhat bizarrely, the authorities have judged that this might scare tourists away-never mind exploding rockets-so they banned phallus-wielding. But a few old-timers keep the spirit alive.

In a testament to their ability to dance, drink and dally for days on end, the rice paddy-area designated for Sunday's festivities is a teeming mass of people early the next morning. Stallholders selling water, softdrinks and fruit are doing a roaring trade as the atmosphere builds.

We edge past a sign screaming 'Dangerous Area' in Thai and English. It must surely be some kind of a joke-most of the crowd is in front of it. Indeed, two years ago several people were killed during the festival, the first fatalities in a number of years. This is serious stuff: if you do attend, I certainly encourage you to be sensible and stay behind this sign.

An audio system allows everyone to hear the countdown before each rocket is launched: 'Sam, sorng, neung...(Three, two, one...)'. Anything else is drowned out by the roar of the rocket igniting and taking off into the blue, leaving a cartoon-like stream of white smoke behind. The team on the ground cheering, hugging and leaping around look as if they've just won an Olympic gold medal. Wafts of thicker smoke drift over the crowd who are busy placing all kinds of bets with each other.

Launches get underway from the half dozen pads and we watch in awe as groups of more than a dozen men struggle to get the large rockets up and ready for take-off. It's the modest three-foot rockets that go the furthest, but the crowd favourites are the larger beasts which really are life-threatening.

Among the crowd, necks are cranked interminably, eyes are peering out from underneath umbrellas, and even monks are carefully observing this pagan festival. When a rocket does explode before it's travelled a reasonable distance, the team members are thrown into a mudpit as punishment. In the midday heat, I'm tempted to join them.

By late afternoon, our energy has been sapped from the cheering, the heat, and the constant alertness required in order to run if something goes awry. Back in town, we can still hear the rockets zipping along to the gods. The winning team eventually parades through town with their well-earned trophy, but it will be a season before we see if everybody else has won the more important contest - that is, enough rain for bountiful crops.