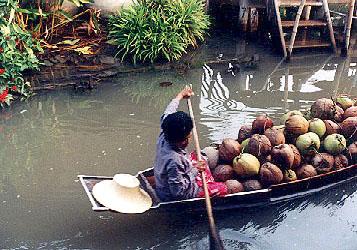 A vendor carries coconuts on the way to a nearby floating market. 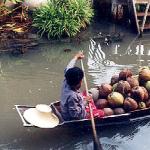 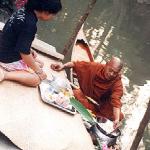 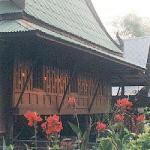 The small wooden boat bobs around precariously as the three of us clamour aboard. The boat pilot revs the engine, we each sit back on our little flat bench and we're off, exploring the narrow khlongs (canals) of Samut Songkhram in search of the resident fireflies.

It's a full moon, so the night sky is naturally bright, and casts the waving palms lining the khlongs in beautiful, luminous relief. There's a gentle breeze, it's much cooler than Bangkok, and the air is so fresh - crisp even - we're all gulping it down. The pilot expertly navigates the crisscrossing canals mostly by moonlight; this is all rather exhilarating.

We're in Samut Songkhram, Thailand's tiniest province. At just over 70 kilometres away from Bangkok, it should be an accessible getaway that makes the metropolis seem like a distant memory.

But it hadn't been so accessible for us, thanks to Bangkok's utterly unpredictable traffic. The taxi ride from downtown to Sai Tai bus terminal - normally a 40-minute affair at most - took more than two-and-a-half-hours. We just made the bus to Damnoen Saduak in the nick of time, and covered more kilometres in the first fifteen minutes than we probably had in the entire trip to the bus station.

Although most of the trip is made along a mammoth highway streaming with traffic, the scenery soon became quite rustic, albeit in an industrial sort of way. Huge artificial lakes with windmill like pumps, used to produce a low-grade salt, glistened under the setting sun. We jumped off the bus at the town of Maeklong - another name the province goes by - and just managed to squeeze onto the last bus to Pak Tor. We stayed on this second bus as far as Kookket temple, from where it was just a short motorcycle taxi ride away to Baan Song Thai (Thai Style House), in the village of Moobaan Kookket - our destination at last.

Baan Song Thai was set up by village headman Kamnan Thawat Boonpat with the intention of encouraging people to appreciate older Thai architecture and ways of life. People can either visit for the day or stay overnight to experience firsthand a way of life that is gradually disappearing. Around a thousand people live in the 200 houses that make up the small waterside village of Moobaan Kookket. Some houses are relatively new while others, like the Kamnan Thawat's stunning 110-year-old teak house and his aunt's nearby 210 years plus house, are monuments to another era. What they have in common is their proximity to water; if Samut Songkhram was a body, it's klongs would be its veins and arteries, influencing virtually every aspect of people's live.

But we've yet to see the village by daylight. Instead we're busy gaping at the tiny living lights winking in the trees overhanging our boat. The engine is cut, and it's just us, the lapping of the khlong water against the boat, and those little lights. Mostly there's just glorious silence.

Yet in the distance, there's a cement bridge spanning the canal - I can just make out the red and white traffic lights passing over it. It seems you really don't have to go far off those monstrous highways to get somewhere peaceful and, well, full of bugs.

Heading back to the house - we're staying in Kamnan Thawat's home for the night - the occasional bat seems to careen straight for my head at great speed, only to swoop away at the last nanosecond. We're welcomed with a homecooked dinner of local and Thai specialties: tom yam pla thu (a fish soup), pla thu thoot (fried fish), khai thiaw (omellete), nam phrik phak jim (vegetables and spicy dip) and phat pak (fried vegetables), eaten on the house's sprawling verandah while the rest of the family busy themselves for bed. We follow it up with freshly cut pomelo, sweet and thirst-quenching.

We take some mattresses under a big mosquito net in the loungeroom. As for that good old country silence: as soon as the lights are turned out, the thousands of insects in the surrounding trees and shrubs come noisily to life. But it's a rhythmic, reassuring sound that sends us off quickly to sleep.

In the morning, we awake with the birds and sit in the sala by the khlong, watching the world start the day. Food and flowers are set out on a mat for the monks from Kookkret temple, who soon come paddling by in their boats, wearing their cooked-pumpkin coloured robes. We pass the food closer to them to pick up when they stop; they bless us and continue on their way back to the temple, where they'll share their goods with the other monks.

The village is known for its pomelos and coconuts; a few boats laden with coconuts come sweeping past, scaring the fat ducks who rush to get out of their way.

After a hot breakfast, we too decide to take to the water using only oar-power, and discover, after nearly demolishing a few unstable poles in the water and crashing clumsily into the banks several times, that this water navigational stuff is a pretty challenging skill to develop.

There aren't many other activities at Moobaan Kookket. Visit the nearby 210 year-old teak house and say hello to Kamnan Thawat's aunt, Paa Thorngdam. Wander around the tended gardens featuring vividly coloured flowers and lush trees; take a moment to experience the knowledge that life doesn't always have to be lived in a hurry, or be isolated from nature.

If you're not the relaxing type, tie in a trip to Moobaan Kookket with a visit to nearby Doon Hoi Lot, where from March to May you can eat fresh hoi lot (finger shaped shellfish), the floating market Tha Kha (rent a boat from the village to get there), or Rama II Park. You can also take a trip to see people making sugar from coconuts via a boat from the village, or head to Baan Benjarong to see some orchid gardens. Just try to time your trip to Sai Tai with good traffic.

The Bettering of Bangkok