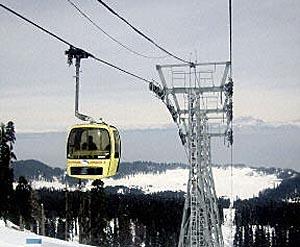 Cable car at Kongdoori in the Indian state of Jammu and Kashmir. 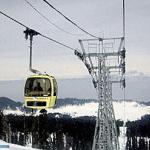 KONGDOORI, India, Feb 19, 2004 - The scenic Himalayan territory of Kashmir, where the tourist trade has been devastated by a 15-year insurgency, is hoping to become an elite ski destination when its highest cable car begins operation.

The ropeway stretching 2.5 kilometers (one and a half miles), slated for completion in August, will connect the bowl-shaped valley of Kongdoori with the 4,390-meter (14,400-foot) Afarwat peak.

"We only have to construct a few more towers and once the snow melts we will start work on this," said Farooq Ahmed, head of the Cable Car Cooperation, one of the Kashmir government's few profit-making enterprises.

Snow-capped Afarwat lies near the Line of Control, the heavily militarized de facto border between rivals India and Pakistan. The two countries have been observing a ceasefire since November 26.

Authorities are convinced many skiers and tourists will be willing to pay the 100-rupee (two-dollar) fee for a round-trip on the Afarwat cable car.

"Afarwat will definitely attract world class skiers to Kashmir once the cable car project is completed," he said.

Until now skiers of Afarwat had to be dropped in by helicopter, an expensive proposition.

Dar said Afarwat was also likely to draw enthusiasts of other winter sports such as snow boarding.

The ropeway is being built by the French company Pomagalski, which built the only other cable car in Kashmir -- one that connects the Gulmarg resort to Kongdoori at an elevation of 3,930 meters (12,890 feet).

The Afarwat project was slated for completion last year but was delayed by early snowfall. Ahmed said work would resume once the harsh Himalayan winter eased in April with work due to be finished by August.

Abid Maqbool, who heads the tourism department for this part of Kashmir, was hopeful the peak would draw tourists from the province, India proper and abroad.

"Afarwat has breathtaking beauty, an ice-fed lake and is a fit place for adventure tourists," Maqbool said.

Work on the other cable car in Kashmir, the one at Gulmarg, was also delayed once -- but for different reasons.

French technicians abandoned the project in 1990 when the Muslim separatist insurgency gathered steam and two of the engineers were briefly abducted.

But Gulmarg, which the state promotes as one of its top tourism destinations, has remained relatively safe compared with other parts of Kashmir and the cable car was completed in 1998. A second phase of the ropeway is under construction.

More than 700,000 tourists visited Kashmir in 1989, with the number nosediving to a trickle within a year due to the violence.

Tourist arrivals have picked up slightly amid peace moves between Pakistan and India, with 184,000 visitors in Kashmir in 2003.