Songkran: Wet and Wild in Thailand... 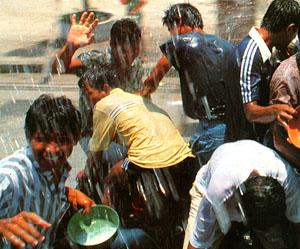 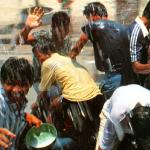 It was a hot day, the temperature considered high even by Thai standards. We were so wet, however, that we almost shivered despite the heat. When a bucketful of ice-cold water hits you in the face under the tropical sun, the difference in temperature soon becomes very clear. It is one of the "evolving trends" of old Songkran custom that large blocks of ice are used to keep the water cold.

Although the first of January is accepted in Thailand as the official date for the beginning of a New Year, the 13th of April, which marks the New Year in the Buddhist calendar, is still celebrated widely. Songkran also marks the death anniversary of Gautama Buddha, one of the greatest spiritual teachers the world has ever produced, and the founder of Buddhism. Many devotees thronged the temples all over Thailand, offering prayers to the Buddha and bathing the Buddha image with scented water.

The festival, which originates from Laos and Thailand, takes water as it symbol. With the passage of time, the Songkran has developed into an amazing water carnival all over the country. Groups of people, friends and strangers alike, lie in wait for their potential victims at street corners, buckets of water ready to hurl at unsuspecting pedestrians.

Most locals below the age of 80 end up soaked to the skin; tourists are usually included in this water baptism. It is actually quite an adventure; so join in the festivities with a bucket of your own. Think of how funny an absolutely drenched, Hawaiian shirt-tourist looks like, and you'll begin to loose your inhibitions and throw water at strangers. Throwing the water at the police, however, is best avoided. They maintain a certain degree of authority and dignity in this mayhem, making it clear that the consequences of any accidental or intentional wetting of their uniform might not be very pleasant indeed.

Songkran is celebrated all over the Thai Kingdom, but Chiang Mai in the north is where Songkran is celebrated on the largest scale. Here, celebrations last for three days, during which every street and every person is completely drenched. You'll almost think it had been raining heavily and everyone left his or her umbrellas at home, except for the fact Songkran takes place in the dry season.

I was fortunate to be in Thailand during the Songkran season a few months ago. There, I noticed two kinds of people during the festival - those who throw water and those who do not want to get wet. Among those who enjoy wetting others, there are some who stay in one place, waiting for unsuspecting passer-bys. Children and tourists game enough to join in are usually in this group. Then, there is a second group who make use of transport like lorries, buses, motorcycles and tuk-tuks, fully equipped with water containers to throw water on everything they pass.

Some expatriates in Thailand embrace the Songkran whole-heartedly - joining in the fun by renting lorries decorated with English words to tour around spraying water and getting sprayed. This is the opportunity for them to demonstrate how happy they are to join in the Thai way of life.

The Songkran used to be a religious festival. It is all about beginning a new year in an auspicious way, and water is used to signify abundance in the coming year. Mid-April is the time where rice is harvested and people bring offerings to the temple, to thank the Gods for blessing them with a good harvest. As with other Buddhist festivals, some celebrate Songkran by releasing birds from captivity and releasing fish to the sea.

In traditional Buddhist homes, children will visit their elderly relatives and sprinkle scented water onto their hands as a sign of respect. Among friends, many splash each other as a gesture of blessing others with good luck and good health for the coming year.

Another aspect of Songkran is the usage of white rice powder, mixed with water into a white paste, and smeared on each other's face. People join hands around the public beach and smear the person they are greeting. Although this practice has a religious basis, the younger generation is treating this as a fun activity.

By evening, even the enthusiastic water throwers become tired, and return home. The hottest part of the day has already passed, and it is now time to get into a dry set of clothes. Till the next Songkran!