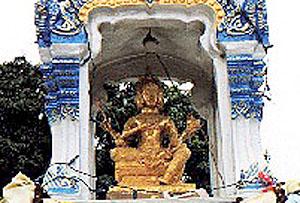 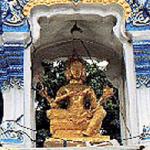 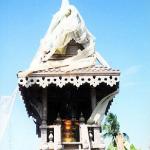 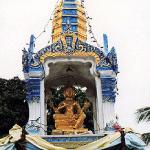 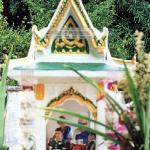 From where I am sitting, I can just see a spirit house off in the distance. This is comforting, for according to Thais, the spirit house is where the phra poom, or "guardian spirit of the land" has lived ever since the humans came in and booted him off the land where this housing development now stands. Had the spirit house not been built, and not tricked out with all manner of domestic accoutrements, my life would come to ruin at the slighted spirit's hands.

At least it is amusing to think so. And this has been one of the roles of many religions down through the ages: the telling of amusing stories that incidentally provide a false sense of comfort in a world designed with human happiness or security - and, indeed, life -- not chiefly in mind.

The spirit house story has its roots in the animism that dominated Southeast Asia before the advent of Indian Brahmanism and Theravadan Buddhism. Thais, though nominally Buddhist, continue to believe in a host of spirits called phi (pronounced 'pee'). Indeed, the governor of Bangkok recently blamed the city's various municipal disasters not on his or his government's incompetence, but on spirits being "against" him - or Bangkok, I forget which.

There is some difference of opinion over the names of the guardian spirits, but they appear to be nine in number. The eight agreed-upon spirits include guardians of the house; garden; countryside; gates, doors, and stairwells; animals; storehouses and barns; temples and other sacred places; and water. The ninth allegedly guards either newlyweds or - mon Dieu! - military installations. This is quite a jurisdiction for one spirit to handle. In any case, Brahmanism had customarily employed shrines for worship, hence Brahman shrine + Thai spirit = spirit house, or sarn phra poom .

Of the nine guardian spirits, the house and the garden spirits are principal, and they therefore generally get houses all their own. The two houses are similar in design, but the garden variety, if you will, is built at a remove from the human house. In my housing compound, the garden house stands on mowed land at the back corner, as far from the road as possible. The primary house is at the compound's entrance and stands just behind, but higher than, a fence. This placement permits the spirit to keep a look out for potential invaders, nowadays presumably the ubiquitous vendors of dried squid.

The variety of objects placed inside and around a spirit house practically defies explanation, and the lists given below are by no means exhaustive. Inside represents the spirit's living space, so here one commonly finds one or many miniature human beings, pieces of furniture, domestic animals and livestock, the odd TV or matchbox car. Outside is the place for offerings, which usually include incense, flowers, candles, drinks, and the odd pack of cigarettes, Thai celestial dancer, or pig's head. Yes, I said pig's head - the preferred food of Phra Poom.

This cushy living arrangement is intended to appease the spirit so that he will not invade the human abode. To further prevent this, the spirit house is made grander in style than the human houses associated with it. Furthermore, whenever a business is begun or radically improved, the spirit must be informed or else the venture may fail. Businesses themselves often have their own spirit houses to guarantee prosperity, and both bars and high-rises are no exception. Even the notorious animists of the American Embassy in Bangkok have a spirit house.

A house's design and the materials used in its construction vary. Some are simple shelters built from wood and metal. More commonly, they are huge, elaborate, multi-colored cement structures formed in factories. Stores specializing in the sale of these prefab houses display scores of these behemoths by the roadside.

The architectural features and symbolism also differ from house to house. One common variation looks like a miniature Khmer-style temple, and houses a four-faced image of Brahma, the Hindu creator-god, together with his bird-vehicle and thunderbolt. Thus do Brahmanism and animism continue to play off each other.

The contemporary Indian philosopher Krishnamurti once remarked, in so many words, that if you put a Coke can in the corner of a room and worship it daily, bowing down before it, offering it incense and food, then the Coke can will become holy - in your eyes. His intention was to poke fun at idolaters, but also to demonstrate that holiness is something we impart to objects and ideas, not the other way round. If God (or gods) did not exist, man would invent Him (or them).

I think of this every time I see Thais offering burning incense to the Buddha, Phra Poom, Brahma, or whomever. Perhaps they are praying for money, or for a bountiful rice harvest, or for something devastating to befall an enemy. From my rarified remove on the tail end of the Enlightenment, I am torn between pity and ridicule.

But then I remember Krishnamurti, and that all these devotees are trying to do is to keep some sanctity in the world, some sense that we as human beings will never be as powerful as we think we are, or aspire to be. The universe is large and baffling - there may be spirits in it - who knows? The least favor we can do for them is to offer company, sustenance, a house.