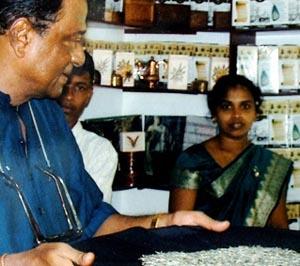 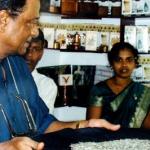 Inspired by a French perfumer and egged on by an English aficionado, a Sri Lankan master tea maker has revived a centuries-old Chinese tradition to make a brew that few but an emperor could afford. Connoisseurs will have to pay through the nose for the "white" tea -- the price is a staggering 1,250 dollars a kilogram (2.2 pounds), or 750 times more than the average price of high-quality pure Ceylon tea.

Malinga Herman Gunaratne, 60, said he is recreating a Chinese method of producing a tea that was demanded by finicky emperors. For the manufacture of "Kilburn Imperial", the tender-most innards of the tea bud are prised out with gloved hands to be sun-dried under surgically sterile conditions, all without any direct contact with human hands. Gunaratne said his product is possibly the world's most expensive tea commercially marketed. It is not available except at his own plantation, about 160 kilometres (95 miles) south of here, and at a tea museum in Seoul, Korea.

Named after Seoul-based Englishman David Kilburn who pushed him to making the exotic variety, Gunaratne said the new tea would be mainly sold at Kilburn's museum in Seoul.

Visitors to the tea plantation can see, but not touch, the tea bushes that give the most expensive tea that Sri Lanka, the world's top tea exporter, has ever sold. Great care is taken to keep out oil and perspiration from tea pluckers' skin that would contaminate the buds and spoil the delicate aroma for connoisseurs who may be hyper-sensitive to the scent of people.

Gunaratne said he hit on the idea after Kilburn told him how a French expert perfumer is able to distinguish between jasmine oil from Morocco, China and elsewhere simply by the smell of the sweat of the flower pickers. Chinese emperors of the Tang Dynasty are said to have demanded that their special tea be untouched by human hands. Gunaratne claims to have perfected the method. "The only time the tea will come into direct contact with a human is when it is drunk," Gunaratne said.

Sri Lanka's tea trade has welcomed Gunaratne's initiative and believes there should be more like him producing high-end speciality teas to boost revenues. Chairman of the Sri Lanka Tea Association, Mahen Dayananda, said the high-priced Kilburn Imperial underscored the niche market for exotic teas. "The way it is made is what makes the difference to this tea," Dayananda told AFP. "I have not drunk Kilburn Imperial, but one of the country's top tea tasters described it to me as being 'very interesting'."

Kilburn Imperial is known as a "white tea" because it is not fermented and put through a process of "firing" and instead allowed to wither in the sun. Tea experts say most white teas, such as Golden-tips and Silver-tips, do not have a great aroma although they still appeal to connoisseurs. "This tea is about perceptions. Only the very rich will buy this tea. It is usually placed on a platter and shown to guests before drinking," Dayananda said. "It is also said to be an aphrodisiac and to have some medicinal properties."

The time consuming process carried out by five tea-pluckers means that Gunaratne's Handunugoda plantation, where tea grows in the shade of coconut and cinnamon trees, can produce only about 35 kilograms (77 pounds) a year. Common-or-garden black tea is made by first plucking two tender leaves and a bud of the Camellia Sinensis, or the tea bush, with bare hands. The gourmet Sri Lankan Golden-tips and Silver-tips teas, said to be aphrodisiacs, are made using just the buds. The Kilburn is even more specialised.