Thailand's King Grows One Year Older, No the Less Wise 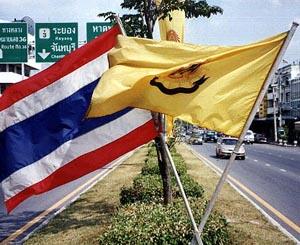 Country and King: As part of the King's birthday celebrations, the national flag of Thailand is flown alongside the yellow flag symbolizing the Thai royalty. Ban Chang, Thailand. 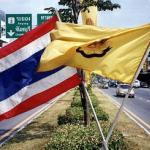 Every year on December 4th, the day before the birthday of Thailand's King Bhumibol Adulyadej, the King makes an address. Only once a year does he address the whole nation, so though he has little formal political power, his words reverberate through the entire Kingdom. Days later, newspapers carry headlines like "Premier urged to heed King's warnings."

As I watched the speech on TV, it occurred to me that this was the first time I had ever seen the King speaking live. Nowadays, if you see him at all - he is 74 years old, and increasingly withdrawn from public life - he is receiving gifts or presiding silently over a state or religious ceremony. But the man talks, makes jokes, and smiles. His eyes twitch: one of them is prosthetic.

The King's message was one of pessimism. The following day's Bangkok Post quoted the King as saying, "The country is in a state of disaster instead of prosperity. Everything is getting worse and worse." Though traditionally the speeches are critical, this year's was unusually grim.

At one point, the King tried to recall an English phrase denoting the root of the country's problems. At first he could not remember, and he gently apologized to the audience for the loss of memory accompanying old age. This got a laugh. But then the word came to him. "Double standard." For the next few minutes, he repeated the word until it resembled part of a foreboding mantra. "I want to ask you," the Post has him saying, "not to use double standards but straightforwardness to tackle problems. There is no progress if double standards exist." Soon the papers were littered with the phrase. The speech was a reminder of how much power the King retains. The full array of Thai dignitaries were in attendance, all dressed to the nines. Thaksin Shinawatra, the current Prime Minister or Premier, sat in the front row, and several times he smiled uncomfortably when the King reproached his administration. However much the people may unite behind Thaksin, who won last year's elections in a landslide victory, they are as one in their respect for the King. Of how many monarchs can it be said, as I have often heard young Thais say of Bhumibol, that they are "cool"? "Awesome"? And a 74-year-old monarch at that?

I have here before me a cassette entitled Candlelight Blues: The Music of His Majesty the King of Thailand for Classical Guitar. The cassette's front cover depicts a sepia-toned Bhumibol blowing on a saxophone, while behind him are images of his original scores. Inside are photos of the King jamming with Benny Goodman and other musical luminaries. Notably missing is a famous photo of the King with "the King" - Elvis Presley.

Some of the song's titles? "Friday Night Rag." "Love in Spring." "H.M. Blues." If this is not cool, I don't know what is, and I am curious to know what the lyrics are to "H.M. Blues", if there are any. "Went down to the palace, fell down on my knees"?

On December 5th, thousands of the King's subjects gather on the Sanam Luang grounds near the Grand Palace in Bangkok to pay homage to their divine bluesman. Holding candles and banners, and making offerings to a giant portrait of the King in full regalia, they sing songs written in his honor. Similar ceremonies take place all over the country. Flags, portraits, and emblems are prominently displayed and festooned with countless lights.

On this day it is common for Thais to do or celebrate good deeds - or refrain from bad ones -- in the King's spirit of benevolence and self-control. Schools commonly make their students plant trees, collect garbage, or beautify a garden. Thai-owned bars don't serve alcohol - a prohibition that occurs otherwise only on election days. This year, a number of tuk-tuk drivers donated blood. A ceremony honored Thailand's best fathers, as December 5th is also Thailand's Father's Day.

Writer H.L. Mencken once suggested that a benevolent despotism is better than a corrupt or ineffectual democracy. As I sat watching this cool, kindly, intelligent, and active King speaking before a body of politicians world-renowned for their corruption and incompetence, I began to wonder if perhaps Mencken was right. Long may His Majesty prosper and long may he play the blues. While I am no fan of monarchy in general, I shudder to think what awaits Thailand when it can no longer follow their King's tune.