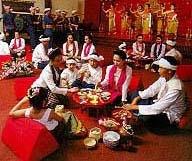 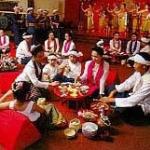 Created by
All Thailand Experiences providing tours and soft adventures away from the normal tourist crowds.

Food presented on a Khantoke
left

Sitting down to a well-presented meal of good and delicious food is something most of us enjoy. Then there are those stand-up occasions where we mix and mingle with other guests and enjoy cocktails and finger foods. Finger foods? Eating with one's fingers? Considered as neither polite nor hygienic in some circles, eating with our fingers is as old as the human race. There is absolutely nothing wrong with it, as we all do it perhaps without thinking.

In Thailand, many people still eat with their fingers and this has nothing to do with social strata. It depends, rather, on the place, the occasion and the meal that is being served. A Thai hostess will follow a set etiquette when offering a meal that will be eaten with the fingers, and those eating will be polite and delicate as they partake of the meal.

Traditional Thai meals are rarely one plate experiences, so the Western concept of having meat, two veggies, and gravy all on one plate is alien to Thai dining. Likewise, the use of an array of cutlery seems to be overkill in Thai minds (most Thais settle for a fork and spoon when not using their fingers). Unless one is invited to a Thai home, the closest most visitors get to dining a la Lanna (northern Thai) is at a Kantoke dinner, so this is something you might like to try.

Visitors who have been to a Thai dinner show in Bangkok usually decide to give Khantoke dinners a miss because they think the two are similar. The Khantoke Dinner Dance Show is much more enjoyable than other dinner shows because of the pervading informal atmosphere, really different style of cooking, and gentle slow-tempo dance entertainment.

Khantoke is a Lanna Thai tradition, not just something invented for tourists' amusement. Thai Lanna was a civilized Kingdom that existed in the area of present-day northern Thailand. King Mengrai was the king who founded the capital and the dynasty. He accomplished and contributed to the prosperity of the kingdom in several aspects, e.g. political science, Buddhist religion, art, and culture.

There are several traditions that eventually became northern heritage one of which is Khantoke. Even today, khantoke implies dinner or lunch offered by a host to guests at various ceremonies or parties, e.g. in the home – weddings, housewarmings, celebrations, novice ordinations, life extensions, or funerals. At the temple celebrations for buildings in a temple's compound, namely bhote, wiharn, sala; Grand Sermons annual festivals such as --- Khao Pansa, Og Pansa, Loy Krathong, and new year.

Trays, spatulas, big spoons, and food containers are the essential implements required for eating. Wood, bamboo, rattan, and coconut shell have been used as raw materials for making the food tray and container products. Coconut shells are used to make spatulas and big spoons. Bamboo is used to make dishes, bowls, boxes, trays, and so forth.

Dimensions of the pedestal tray, Khantoke are low, round tables with several legs connected to the top tray that has a round base. Khantoke (or it is sometimes called toke) was originally made with a big solid piece of teakwood. Lathing and carving techniques are employed. After lathing, carving, and polishing, coating with natural polymers was then applied. Bamboo and rattan can be also used instead of teakwood.

Therefore, khantoke lacquerware, which has bamboo as a base, is also popular. Kian is a northern Thai word (similar to central Thai for word of gluing) that means lathe. Therefore, Baan Chang Kian or Wat Chang Kian used to be the community that was the residence of lathe craftsmen (chang) in the old days.

The wonderful thing about a traditional Lanna Khantoke dinner is the combination of classical Thai dance and music with excellent food. To describe Thai Classical Dance, in words, can never do justice to the art form. To view a performance, especially if many dancers are involved, reminds me of a field of sunflowers, or wheat, swaying in unison at the whim of an evening breeze. Or perhaps the soaring of seabirds as they ride the thermals, at one with the wind. Thai Dancing is a pageant of poetry in motion.

Stemming from the Royal Courts of Old Siam (not necessarily within the geographic boundaries of present-day Thailand), the influence of which extended as far East as the Khmer capital of Angkor, Classical Dancers entertained and soothed their local royalty as well as performing before visiting royals and nobility.

When you arrive for your Kantoke dinner, you will have to remove your shoes before entering into the spacious hall built of teak where decoration is from original materials and motifs only. Your hostess in traditional attire will guide you smilingly to your place, comfortably seated on cushions on the carpeted floor or at nearby tables if you prefer. Within moments, the attentive staff will bring your drinks and Khantoke. The Khantoke is the circular wooden tray set on pedestal that serves as a table. It will carry one of the most delicious meals you have ever eaten.

Using the fingers of the right hand, a small portion of sticky rice that is served in little woven bamboo baskets is kneaded into a bite-sized ball (it takes a little practice!) and the ball is dipped into the desired main dish (a portion can be melded onto the rice ball) before being popped into the mouth. The fingers shouldn't really enter one's mouth (the food shouldn't be crammed) as the movements are politely delicate. A rinse of the fingers and the process is repeated again and again. Thais from the humblest to the highest continue to dine in this traditional manner when the cultural or home occasion arises, and they are adept at making it look easy and gracious.

Start with the fried pumpkin as hors d'oeuvres and then alternate as you like between the mildly spicy red chili, tomato and minced pork dip, the succulent fried chicken, and a mouth-watering Burmese pork curry that is so gentle, so soft that you will gladly accept a second helping.

The chili dip is called Nam Prik Awng and is teased from its bowl with pieces of deep-fried crispy pork skin or freshly sliced cucumber, whichever you prefer. The chicken and Hangleh, as the pork curry is called, go well with the stir-fried cabbage and either the sticky or plain cooked rice. The Khantoke also contains a bowl of crispy fried noodles to complement the rice. Dessert, served separately, consists of fried rice crispies and, if you dare to break the spell of tradition, either coffee or tea.

About halfway through your meal, a classical orchestra will begin to accompany troupes of dancers in gorgeous costumes, or occasionally a solo dancer, as they perform the graceful movements of Thai classical dance for your pleasure. These are absolutely authentic Northern Thailand dances, quite distinct from those performed in Bangkok and Ayutthaya. They are rooted in the region's history, literature, and way of life.

While some, like the Fingernail Dance, which is usually performed only on special occasions such as a state visit, are slow, stately, and exquisitely graceful; others, such as the solo Sword Dance, have a flashing, ferocious beauty. Performances, such as the Magic Fowls Dance, meanwhile, are taken from local folklore and literature while a fourth genre that includes the Silk Reeling Dance depicts various aspects of daily village life.

In some cases, the dances were originally either choreographed or polished by northern court poets and dance instructors to celebrate a particular event such as the royal visits of King Prajadhipok and King Rama the Seventh to Chiang Mai in 1927. In others, members of the old Chiang Mai royal family were themselves the inspiration.

The Shan and Burmese courts are represented in other dances such as the Mahn Mui Chiangta Dance, while the Thai Lue Dance is originally performed by the Thai Lue people of Nong Bua village in Nan Province. The final dance is the Ramwong, or Circle Dance. This is a typical Thai folk dance that was popularised some 60 or 70 years ago. After a few introductory rounds so that you, the guests, can see how it is done, the dancers will invite you to join in on a cheerful, friendly finale to evening's program.

The total time takes about two hours to eat and enjoy the music and entertainment. This is a dinner you must do at least once while visiting Chiangmai. Many Thai people from Bangkok and other parts of Thailand always visit a Khantoke Dinner restaurant when in Chiangmai.

Here is a short streaming video I took with my wife and clients at a Traditional Khantoke Dinner.