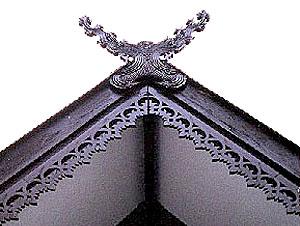 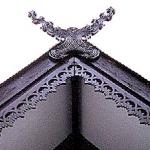 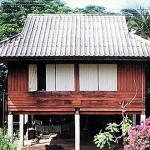 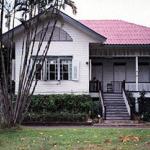 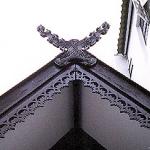 For about a year, near the walled city of Chiang Mai, I lived in a house on meter-high stilts. The house was made of unpainted, dark-brown wood. Its windows were mostly small, and all had shutters - not the plastic, decorative, and useless "shutters" common to homes in the American suburbs - but real shutters that could close and lock from the inside. There were also a number of screened openings in the walls. Should winter nights in northern Thailand grow too cold, these could be closed off by sliding a thin plank.

The house was small: you could cross its length with perhaps ten long strides. It had only two rooms, plus a small, low-ceilinged bathroom set somewhat below the main floor. Some of my most terrified moments were spent in that bathroom. Before the sun had come up, the light bulb attracted frenzied bees. I, naked and vulnerable, had to stun them with the showerhead and then bludgeon them to death with a rubber flip-flop -- a striking departure from my usual pacifism. The house's metal roof was in the shape of an inverted V, and the eaves were long, to deflect the rain and sun. The ceiling was a patchwork of woven rattan, and in the space between ceiling and roof were presumed to live many unseemly creatures, including the too-kay that occasionally hung from the ceiling's visible side.

This humble little house was the only house I have inhabited that could remotely be called traditional. I am back to the world of the mass-produced and the concrete: my townhouse in southern Thailand could very well be in Casablanca or Capri. And though there are certain advantages to it - room to pace, the cheery white-painted walls - I do rather miss that little box on high. I even sometimes miss the too-kay.

The single-story, elevated wooden house is generally considered to be the template of the traditional Thai home. The kind of wood used depends largely on your means, though increasingly it also depends on how much of that wood remains in Thailand's blighted forests. The resilient teakwood is the best, though redwood is also used. The wood is sometimes protected by oiling, seldom by paint. Simpler houses use readily available materials: bamboo, palm leaves, rattan, twigs. Palm-leaf roofs have given way to ceramic tiles or galvanized metal.

Elevating the houses makes them cooler, keeps them well above floodwaters and rain-soaked ground (hence they are often called "amphibious houses"), and also keeps them out of reach of dangerous animals like snakes. The space below the houses has its uses: it can provide storage of a harvest, livestock, and various tools, e.g. ploughs and looms. In the hot season, it also provides a cooler place to work or play.

A distinctive characteristic of the old Thai house is its modularity. As it is held together using no nails - wooden dowels and dovetailing planks serve instead - it can be taken apart in a day's time. The pieces can then be stacked on a boat, moved elsewhere, and reassembled. Thais are not nomadic, but a majority of Thais still rely upon agriculture, and this makes them vulnerable to fickle Nature. In Thai, the word for "move" (as in "to settle in a new place") is yai bahn: "move the house".

Thai houses tend to grow organically. In the old days, houses were congregations of separate units connected by walkways. As families grew, more units were added. In this way, as children were married off, the new couple could have some privacy, but also be around to care for elders. Now, two houses are often side by side and then connected by a verandah, as in the "duplex" huan kahlae of the North.

Thailand is roughly divided into four regions: north, south, central, and northeast. Each region's houses have their defining characteristics. The bargeboards of northern houses cross at the apex to form kahlae, wing-like structures that ward off evil spirits or indicate the houseowners' social status. Central and northeastern houses tend to be raised higher than northern and southern. But in the south, posts tend not to be hammered into the ground, but set in a foundation, so that when the monsoons come the posts do not shift in the rain-softened ground. In the north, meanwhile, houses tend to have smaller windows, because of the cooler climate.

Kahlae are not the only ornamentation. Bargeboards are often curled at their ends, apparently in imitation of the nagas (serpents) making up the bargeboards of Khmer-influenced Thai temples. Panels carved in Chinese designs appear under windows and over doors. But such ornamentation is generally a privilege of the wealthier classes.

Thai domestic architecture has other "spiritual" components. Thresholds of Thai houses tend to be raised to prevent evil spirits from entering the house at night. (The high threshold also prevents small children from tumbling into the canal by day.) Thai houses are supposed to be oriented north-south for good luck (and so that they benefit from north-south breezes.) Fitted to the lintel of the bedroom in a northern-style house is a carved piece of wood known as ham yon, or "magic testicles", also meant to guard against evil spirits.

The construction of traditional Thai houses has been on the decline for some time, especially in the cities, but also in the rural areas following a former Prime Minister's program to eliminate traditional Thai culture. Western influences, the high price of favored hardwoods, and the decline in the number of knowledgeable artisans - all have played a role. It is estimated that a proper, well-built Thai house would run about 1.5 million baht ($33,000) in a country with a GDP per capita of $6,700.

But hope remains that these old-style houses will not become extinct. Factories now produce prefabricated traditional houses, and a new effort has been made to equip young carpenters with the traditional skills. Moreover, many "new" houses are assembled using pieces of the old.

The most famous traditional Thai house was "recycled" in this manner: the Jim Thompson house in Bangkok. Now open to visitors, the house was built in 1959 using houses from Central Thailand for use by Thompson, an American who gained wealth through the production of Thai silk. (He also gained renown by disappearing during an ill-fated junket.)

Writer Harold Stephens once likened living in Thailand to living in museum. Usually one thinks first of its thousands of temples. But even the many buildings where Thais conduct the more mundane tasks of life can be far from mundane.