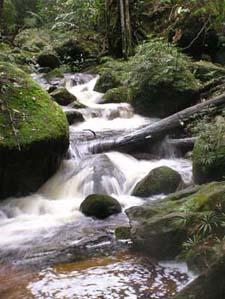 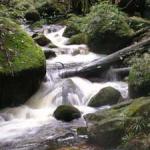 Unfamiliar wilderness, rugged terrain and mysterious location - these elements were exciting enough to lure me into climbing Mount Rajah. This barely-known mountain stands proud at 1683 meters, next to Chamang Waterfall at Bentong town, Pahang. My mountain climbing buddy told me that "orang asli" used to set out on foot to the peak to appease the spirits that were believed to dwell atop. So out of curiosity, during the recent weekend, 14 of us took the plunge to visit this place that is very much devoid of information.

We started our assault on Mount Rajah at 10am after having reached the waterfall - five minutes drive from Bentong town. We began our trek up the forest-edge that was partially visible from the road-shoulder, 150 m away from the car park.

The first part of the journey takes three hours to the first pit-stop, a breathtaking waterfall which formed part of the gigantic Chamang waterfalls complex. The trail believed to be used by weekend mountain bikers as testified by the tyre tracks we saw. Abuzz with clear sound of the waterfall, the first hour walk was relaxing. Soon, we passed a lovely orchid garden where wild purple orchids adorned the view and pitcher plants added on as a bonus greeting. Ferns-maze later greeted us down the trail, some of them reaching over five feet high!

The vegetation zone changed as we moved into the thicker jungle. Broken branches hampered the path at certain stretches while wild vegetation begun to creep the barely-visited path. We maneuvered meticulously along the sharp ridges, cat-footed most of the time. It was too soon when I realized the forest floor has become damper and the sun was not the filtering through. We were entering the leech abode! It got me hurtling down the trail, followed by squealing sound when I felt the blood-sucking slug scurrying up my legs for a free meal on the house.

After feeding the leeches, we finally came to a river with sand-bed at the opposite side for a quick bite. It was near 2pm when we reached our lunch destination. Here, the flowing streams dropped at about 80 meters, an eye-soothing view indeed while devouring lunch.

Beyond the waterfall was the official obstacle of a rugged terrain that will challenge any climbers. We were careful not to grab any thorny plants that grew in abundance for support or bear the consequences of more squealing. Just minutes into the climb, the weather suddenly deluged us with rain. Draped in our raincoat, we continued hauling up sturdy poking roots. My hiking shoes has sunk deep into the mud, my hands loaded with mud and knocking on overhang tree branches soon became countless for me to even bother. A mud-bath fun it was!

It was 5 pm when we reached the lower peak adjourning to Mount Rajah's peak. Vegetation has begun to thin. As I looked to my left, Mount Rajah came into view - standing demurely like a "rajah" itself with its peak shrouded in the evening mist. Gulp!

We traipsed down the last downhill slope after a short rest. Ten minutes later, the challenge that queued before me whisked my breath away. I was presented with a sheer 80-90 degree trail - the last hour of the climb. Ironically, it was the best adrenaline shot as I scuffed my mud-coated shoes and forced myself up the precipitous and soggy trail. We stopped by the last water point at 6:15pm for refill.

The peak of Mount Rajah came into view half an hour later, besieged us with pure whiteness and chilly wind. Sadly, the evening mist has shoved aside the charming view of the "rolling mountains", as my friend named it - where mountains flow like tranquil waves at the horizon in a boundless scene.

Despite the leech experience, mud-stunts, frenzied downpour and ragged shorts from almost 9 hours of climbing, we pitched up the tent for the night, had dinner and sought the great oblivion of sleep. With our shoulders aching and muscles worn out, a smile somehow managed to carve on our faces - symbolizing a climber's satisfaction when a mountain is conquered.

Kuching in my eyes