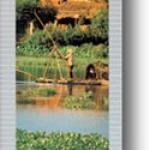 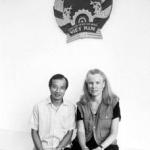 Whether you're planning a trip or just trying to deepen your understanding of Vietnam, Vietnam: Land of the Ascending Dragon is a valuable look at the country and its people.

The 54-minute video tour introduces Vietnam's geography, history, folklore, myths and food in a lively and informative way. It explains everything from the ao dai to the ethnic minorities and their regional differences.

The work of award winning writer, producer and director Janet Gardner, who has been traveling to Indochina since 1987, the video is thorough and informative without being overwhelming.

Gardner takes you to the tunnels at Vinh Moc and talks with the people who built and lived in them. Along with the classic shots of Halong Bay and the Hai Van Pass there are interviews with shopkeepers, artists and scholars that bring the story to life as you travel from Hanoi to Ho Chi Minh City.

When looking at Ho Chi Minh, Gardner not only shows us his Hanoi home, but includes original black and white footage of the Vietnamese leader.The video is not all-inclusive, though neither are most trips.

Even after several visits to Vietnam I have yet to see the Cham museum, a folk festival, a lacquer factory, the tunnels or the famed water puppets. Fortunately, Gardner and her crew captured it all on film. I would still like to experience these places in person, but the video is the next best thing to being there.

Vietnam: Land of the Ascending Dragon
Winner of a CINE Golden Eagle Award in history and the Lowell Thomas Award, was produced and directed by Janet Gardner, shown below with assistant producer Pham Quoc Thai, at Vietnam's Mission to the United Nations.Ê This video is available through our association with Amazon.com

The Story of Nom