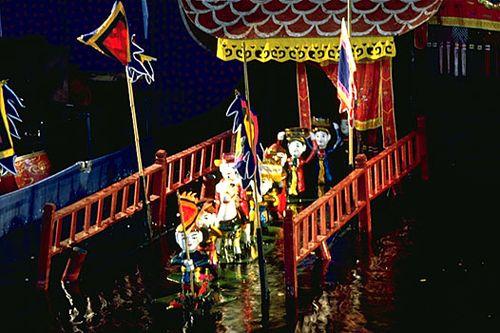 Flags are hoisted to signal the start of the show - springing up from beneath the water's surface; they somehow emerge completely dry. 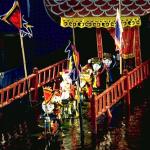 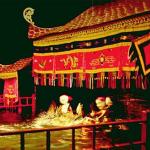 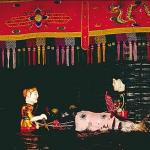 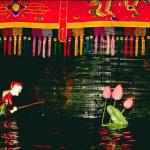 A water pond framed by a gold filigreed pagoda is visible as the audience enters the space, as is a platform, stage right, prepared for the musicians' arrival.

Raising the Flags and Introducing Chu Teu, Master of Ceremonies

Flags are hoisted to signal the start of the show. Springing up from beneath the water's surface, they somehow emerge completely dry. We meet Chu Teu, the jokester who opens the festivities and serves as Master of Ceremonies. Bantering with the musicians, wisecracking with the audience, he brings us the latest village gossip, free to mock everyone and everything.

I, Teu, came from heaven
Exiled to earth for stealing a persimmon
Seeing that this society is full of complicated problems
I must wade in to try to sort out these entanglements.

Dance of the Dragons

Exuberant dragons dance on the surface, spouting water and fire. Legend has it that a dragon and a fairy were the ancestors of the Vietnamese. Around 2800 BC, King Lac Long Quan married Au Co and had one hundred sons. After a time, he told her "I am descendant of the dragon and your ancestors are the fairies. It is not possible for us to stay together. Why don't you take fifty of our sons to the mountains while I take the other fifty down to the sea?"

"Who says that riding a buffalo is a hard knock life?" The water buffalo is the omnipresent draft animal of the Vietnamese countryside. Boys grow up tending the animals, amusing themselves while seated on the buffalo's broad back in the cooling waters of a pond. The song evokes shared memories.

Let me tell you about the rice fields, the villages
Enclosed in emerald green bamboo,
the sound of a flute floating above the back of a buffalo
Come back, those who still miss the homeland.

Farmers catch frogs to supplement their diet and to sell in city markets. Frogs? legs are a succulent dish on restaurant menus.

Ducks are raised everywhere in Vietnam for family consumption and for the market but foxes have other ideas and the farmer must protect his flock.

Fish are the primary source of protein for most Vietnamese. Fortunately, the countless ponds, rivers and seas are still largely unpolluted and well stocked. Children and adults catch fish with all kinds of baskets, nets and rods.

The Scholar's Triumphant Return to His Village

Traditionally, the country has always valued a rigorous educational system that involves many tests. It is a rite of passage and for those who finally complete all parts of the examination, they are accorded many honors, given a banquet and sent home to their villages in a celebratory procession. Upon returning to the village, the scholar puts on a lavish feast for all his neighbors to show gratitude for such good fortune.

On the water, the puppets recreate the joyful, humorous lion dance which men perform throughout Vietnam at the Summer Festival.

Dance of the Phoenix

The courtship of a male and female phoenix is a delicate ritual in which two soulmates meet. The couple is a symbol of noble love and fidelity.

King Le Loi and the Turtle

The legend of the returned sword is the Vietnamese counterpoint to the legend of King Arthur and the Lady of the Lake. Le Loi led a ten-year uprising (1418-1427) to regain independence from China, aided by a magical sword that had been given to him by a giant turtle. After he defeated the Chinese and became king, Le Loi was boating on a lake. The turtle surfaced and asked the king to return the sword. He agreed and the lake, which became known as Hoan Kiem ("returned sword") is a jewel in the center of Hanoi.

Children Playing in the Water

Water is not only a source of life and sustenance, but also a place to play.

The boat races begin and the competition is fierce.

Unicorns Play with a Ball

Two unicorns toss a ball back and forth, echoing the rhythmic strengthening exercises of Vietnamese martial arts.

Dance of the Fairies

The feminine side of Vietnam's dragon and fairy creation myth is recalled with flowing choreography. The fairies are known as the protectors of the Vietnamese world and descend at night to dance on the moonlit water.

Dance of the Four Sacred Animals

The symbolic guardians of Vietnamese temples perform a closing dance. Vietnamese believe the most auspicious animals with magical powers are the dragon, the unicorn, the turtle and the phoenix.