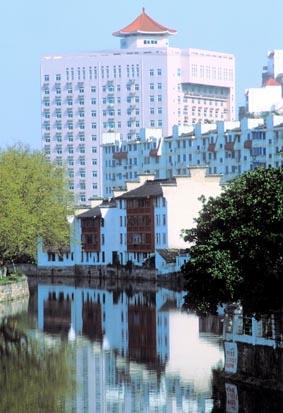 Wuxi, Jiangsu, China: The Grand Canal flows through the centre of Wuxi city. 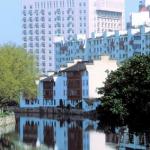 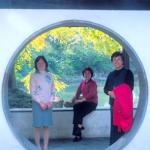 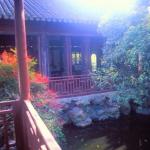 Ma Li Fen, a native of the ancient city of Wuxi in China’s Jiangsu province, is an enthusiastic advocate for her beloved hometown.

“I’ve been away working in Manchester”, she says offhandedly, “but I’m not going back there again. It’s an unbelievably dirty city. No wonder the English look so unhealthy!”

Indeed, Manchester scarcely rates comparison with Wuxi, which is situated almost idyllically on the Grand Canal running from Beijing to Hangzhou. While Wuxi is badmouthed in some of the guidebooks through sheer ignorance, it in fact makes an excellent day-trip from Shanghai.

Wuxi is today renowned for its superb gardens, including the Jichangyuan Gardens and Liyuan Garden, which are outstanding examples of the Jiangnan type of classical gardens that developed in the Lower Yangtse Valley. Jichangyuan (“Garden for Easing the Mind”) is just a part of the huge Xihui Park, which is so big that people have been known to enter and never find their way out again.

Besides the Jichangyuan Gardens, Yihui Park has many other precincts, including Jingshan Park, Moon Rising Spring (said to be one of the three best springs in China), Huishan Temple and Xishan Hill, topped by an extraordinary seven-storey pagoda. In all, the Park includes 18 major historical sites, dating from the Tang Dynasty.

I found walking around Xihui Park to be supremely relaxing. The gardens seem to have been designed so as never to overwhelm. The eyes never have to take in a zero-to-infinity range, with natural or man-made screens limiting the vison to what is immediately present. The layout, too, seems to mimic nature’s very best efforts. Atop Xishan Hill, the crimson-painted Longguang Pagoda, built during the Ming Dynasty, keeps silent watch over the gardens.

In another corner of Xihui Park, visitors take to pedalo-boats to cruise an ornamental lake, whish lies between Xishan and Huishan Hills. Nearby, a Swiss-style pigeon house attracts throngs of kids. A tree-shaded walking path leading through the Park is festooned with a riot of coloured lanterns.

Overall, the effect of Yihui Park is stunning. “But you absolutely must visit Taihu Lake!” said Li Fen. “It’s the main reason people come to Wuxi”. As I was later to learn, Taihu Lake is bigger than the entire municipality of Wuxi, covering well over 300 square kilometres. Two major bays of Taihu Lake – Meilang and Lihu - are each attractions in their own right, the former being home to the scenic Three-hill Island and Turtle Head Islet.

Another opinion is provided by young Englishman Dave Trainer, who has been teaching English in Wuxi for the last eight months, and who commutes regularly to Shanghai in search of big-city entertainment. “Yihui Park and Taihu Lake are good”, he says, “but admission is too expensive. Most people I know prefer Chengzhong Park, in the city centre.”

It has to be said that for visitors, admission charges (at 25 Yuan or about $US3 to either Taihu lake or Yihui Park) are reasonable enough. But whatever the case, Wuxi is much more than just its gardens. Wuxi City has a L-O-N-G history. More than 3,000 years ago one Qinbo, the eldest son of Emperor Zhou Taiwang, came here and founded the Gouwu Kingdom with his brother, Zhong Yong. Emperor Han Gaozu, the first ruler of the Han Dynasty, established a county here and called it Wuxi (which means “no more lead or tin”, because the tin and lead had been completely mined out).

With Ma Li Fen, I take a tour of the CBD of Wuxi. Li Fen’s family is typical of the new China, where a modicum of business acumen reaps substantial rewards. Her father, Ma Qing You, runs a couple of shops near the city centre, selling fishing tackle. In the spotless family apartment midways out of town, all the latest hi-tech gadgetry, including sound systems and flat-screen TV, graces each and every room.

Many Shanghai people come to Wuxi just for the shopping. The city’s pottery, marble and bamboo products are famous. A good place to find all of these is at Wuxi Commercial Mansion, at 343 Zhongshan Road. Foodstuffs are also a popular buy, including the famous Wuxi pork spare-ribs.

To try some of Wuxi’s regional delicacies, there could be no better place than Wuxi Roast Duck Restaurant. However, the palatial exterior seems to say: “this place is super-pricey!”

But Li Fan re-assured me. “It’s really inexpensive”, she said. “My friends and I eat here all the time”.

The food at Wuxi Roast Duck Restaurant is superb. Roast duck slices, wrapped in a light pancake with spring onions and a tangy sauce; Glazed pork spare-ribs with bitter melon (delicious but VERY fatty); baby Chinese cabbage with mushrooms and oyster sauce; and to finish, a huge bowl of duck soup that is much more duck than soup. And the price? Including beers, 92 Yuan (about $US10) for two.

At night, Wuxi’s city centre is a kaleidoscope of lights, as the city’s burghers try to emulate the commercial success of Shanghai. A popular plaza at the intersection of  Zhongshan Bei Lu and Jiefang Bei Lu seems to have been designed by a town planner on steroids, with high-rise, neon-clad Shanghai-clones towering all around. In the plaza, photographers in little booths offer their services to prospective marriage couples.

I never DID get to visit Taihu Lake, 12 km from the CBD of Wuxi. But Zhongcheng  (Central) Park was just as Dave Trayner had said – a popular oasis right in the city centre. Brilliantly floodlit at night, this is a place that in the West would be closed after hours for fear of attracting “undesirables”. But in China, fear doesn’t seem to require a place in the tourist vocabulary.

Big things are now happening in Wuxi, in its attempt to “out-Shanghai” Shanghai. A new light industrial zone has been developed on the outskirts of town, and it was announced in late February 2002 that the firm American Landmark would invest $US 300 million to build a high-tech theme park in Wuxi. Where the city will go from here is anyone’s guess, in a super-speed nation where the only thing that seems permanent is never-ending change.

Getting There: Trains run regularly from Shanghai Railway Station to Wuxi, on the Nanjing line. The trip takes about two hours. Very comfortable soft-class seats cost just 29 yuan ($US3.50). Allow plenty of time to buy your ticket, as the ticket office can get crowded (though people in the queues are invariably polite and helpful). The last train back to Shanghai from Wuxi is just after 9 pm.

Where to Stay: Jinjiang Grand Hotel, 218 Zhongshan Road, Wuxi 214002, is a 4-star establishment right in the centre of all the action. Tel: +86-510-2751688, tel: +86-510-2768053. The hotel has a number of restaurants, including Jinjiang Chef (serving such delicacies as Goose’s Head Soup, Jellyfish with shredded Turnip, and Pigeon in Bean Sauce), and the Jinxi Revolving Restaurant, providing a panoramic view of the city.

Where to spend the rest of your money: