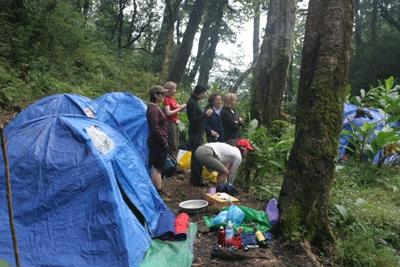 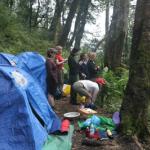 Bach Ma National Park is situated in the central Annamite mountains. The national park lies on a high mountain ridge that runs west-east from the Laotian border to the East Sea at the Hai Van pass. This ridge interrupts the coastal plain of Vietnam, and, therefore, forms a biogeographical boundary between the faunas and floras of northern and southern Vietnam. This ridge also affects the local climate at the national park, which is probably the wettest place in Vietnam: the mean annual rainfall at the summit of Mount Bach Ma is 7,977 mm.

The geology of the national park is dominated by granite, with some overlying areas of sandstone, schist and gneiss. The topography is generally steep and rugged, formed by heavy dissection of the substrate by surface water. The national park is dominated by a west-east ridge, with several peaks above 1,000 m, the highest of which is Mount Bach Ma at 1,448 m. The lower slopes and hills are less steep, and are bordered by a narrow alluvial plain.

The Bach Ma area has long been noted for its rich biodiversity. One reason is that, within a relatively small area, the area supports a wide range of habitat types, from coastal lagoons to montane forest. Additionally, Bach Ma is situated at a biogeographical boundary between northern and southern Vietnam, and between the Annamite mountains and the coastal plain.

The main forest types found within the national park are lowland evergreen forest below 900 m, and montane evergreen forest above this elevation. Plant species richness within remaining forest areas is, however, still high, and the wider Bach Ma-Hai Van area is considered to be one of seven globally important Centres of Plant Diversity in Vietnam.

The mammal fauna of Bach Ma is incompletely known, and only 48 species have so far been confirmed to occur at the national park. However, a large number of mammal species of conservation concern have been recorded at Bach Ma National Park, for example, Red-shanked Douc Pygathrix nemaeus and a species of gibbon.

To date, 249 bird species have been recorded at Bach Ma National Park, and the number of species recorded in the wider Bach Ma-Hai Van area totals 330. The national park lies at the southern extent of the Annamese Lowlands Endemic Bird Area and is known to support populations of at least four of the restricted range species found in this EBA: Annam Partridge Arborophila merlini, Crested Argus Rheinardia ocellata, Short-tailed Scimitar Babbler Jabouilleia danjoui and Grey-faced Tit Babbler Macronous kelleyi. In addition, the national park supports a population of an endemic subspecies of Silver Pheasant Lophura nycthemera beli. Also of great conservation importance was the record, in May 1998, of Edwards's Pheasant Lophura edwardsi, 1 km outside of the buffer zone of Bach Ma National Park. This globally endangered species was believed extinct until its rediscovery at Phong Dien and Dakrong proposed nature reserves in 1996. Because of its importance for globally threatened and restricted-range bird species, Bach Ma qualifies as an Important Bird Area.

Between 1933 and 1943 the French colonial administration established a hill station on Mount Bach Ma. This hill station comprised two hotels, 130 holiday cottages, a swimming pool and a tennis court. Of the original buildings, however, only ruins now remain. Since reunification in 1975, a tourism resort has been re-established at Bach Ma. There is a guesthouse at the national park headquarters and several nature trails. The forest at the national park protects two important watersheds, which supply water for irrigation and domestic use to households in the surrounding lowlands.