Chances are if you visit Bali you will come home with a lovely batik like this one. They are sold on the streets and in many shops; and there are even schools cropping up to teach tourists the art. 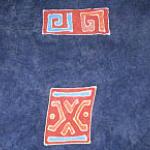 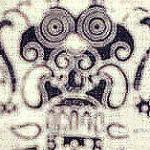 In 1941, two ethnomusicologist brothers traveled to Bali to record what they deemed the threatened art of the Balinese gamelan orchestra. These orchestras, consisting almost entirely of a score or more bronze gongs and xylophones, produced a music hypnotic and haunting. The music has since been burned onto CDs, one of which, "Music For The Gods," shows two women frozen in precise, geometrical poses of Balinese dance. The women's grave faces and beautiful, pensive eyes bespeak some premonition of the mortal wound that the Westernization brought by World War II would inflict on their ancient culture.

As my jumbo jet taxis down the runway of the modern airport of Surabaya on the island of Java, this wound is apparent. This, the Surabaya of Conrad's Victory et al., is no longer an enchanting "outpost of progress", but a smog-cloaked congregation of skyscrapers. The faces of the women remain, but their bodies are now clothed in the standard uniforms of international travel - those of airhostesses and ticket vendors. Gamelan orchestras can be heard in the airplane's headsets.

While Bali has withstood the separatist tumult that is tearing Indonesia apart, signs of the sunken economy abound. It is almost impossible to get anything without the help of a hundred eager and talkative hawkers and middlemen. Everyone is potentially a taxi driver. The queries of "Transport?" flood the air, like auditory hallucinations produced by fever.

The city of Kuta, at the southern end of the island of Bali, is the starting point for most travelers. For many, it is the only point. Kuta is a surfing mecca. Gamelan playing in the temples must compete with thrash metal playing in the convenience stores. There is a Hard Rock Cafe, a tower for bungee jumping; and shirtless, bronzed Aussies and Japanese lope down the crowded streets, surfboards under their arms, headed to the beach.

As in so many places in Asia, this new commerce tramples, but falls short of destroying, the millennia-old traditions and creations of the inhabitants. The Hard Rock Cafe is not hewn from stone, like the marvelous statues. Travelers may revel in discos by night, but the predominantly Hindu Balinese make offerings to their own gods come morning. Trays made of banana leaves, filled with flowers and burning sandalwood incense, are placed reverently into the streets. Though by noontime, the trays have been squashed by bemos (minivans) and motorbikes, and their flowers soiled and scattered, new trays will take their place the next morning.

The traffic is nonetheless a menace in Kuta. It is better to rent a motorbike and get lost in the country outside the city. The ever-present odor of sandalwood wafts on the fresh air of the rice paddies, strung with networks of white strips of cloth, and dotted with scarecrows to ward off winged thieves.

Bali's cultural center Ubud, tucked into the hills a few hours north of Kuta, is reachable by bemo. The sides of the roads en route are crowded with the galleries of silversmiths and batik-makers, whose work the bemo drivers are wont to extol - this minutes before they drive the same traveler to a gallery, looking for a kickback.

Ubud is remarkable for its quiet beauty and its artistic energies. A dance of some kind occurs nearly every night. One such is the Gabor dance, in which a masked old man wanders around the stage, subject to fits and pains, wiggling the fingers of his oversized gloves, with their long, blade-like fingernails. The unmoving, bulging eyes and awful fangs of the mask terrify young and old alike.

The style of the dance resounds with influences of its antecedent, the Indian bharatnatyam. They share geometrical precision and portentous movements of hand and eye. The eyes may be tranquil, or staring ahead in fear and aggression, or darting to the corners to suggest suspicion. The dance, asserting the power of supernatural forces now widely discredited, is liable to send shivers down your spine; and you may come away believing Hamlet's riposte: "There are more things in heaven and earth, Horatio, than are dreamt of in your philosophy."

At the Tirta Sari show is the same intimation of forces unseen. In the Barong dance, an army of men try to kill a woman with keris, or long, serrated spikes, but the woman casts a spell causing them to turn the spikes on themselves. The twist is so unexpected that you actually believe that the actors will stab themselves, as the music reaches a percussive crescendo almost beyond human endurance.

The hills around Ubud are a nice break from such pathos. Roads lined by craftsmen's studios lead to acres of rice fields. At one turn in the road, a group of nude Balinese men bathe in a waterfall. At another, a mother and her children wash their clothes and themselves in a canal. The woman makes no attempt to cover her naked body from the eyes of the passing traffic. It is a brief glimpse of Bali as it might have been.

It is only a short bike ride from one epoch to another: back in Ubud, dreadlocked Balinese headbang to live music in reggae bars. Posters and paintings on velvet of Bob Marley line the walls. A banner depicting a marijuana plant hangs next to a sign which reads, "Drugs are ilegal [sic]." The acronym PDP, denoting the party of Vice-President Megawati Sukarnoputri, appears alongside her portrait. The Balinese moonshine arak is served and covers of Nirvana songs are played. To hear Nirvana in this destination of a Hindu diaspora occurring centuries ago is an all-too-common irony of a globalizing world.

The bus trip from Ubud to the north coast's Singaraja heads high up into the cool air of the hills. On either side of the road as it descends into the city are wide-open spaces filled with drying coffee beans and cloves. Lovina Beach, a few kilometers to Singaraja's west, affords lovely sunsets. The sun sinks and melts like orange sherbet into the ocean. Children and fathers fly Bali's ubiquitous kites, shaped like manta rays and dragons, while the hulls of fishing boats knock together somewhere in the distance.

This is how Lovina would be, were one's view not occluded, and senses otherwise distracted, by a horde of hawkers and vendors that trawl the beach. They sell watches, handmade paper journals, calendars, batik, necklaces, fruit, ice cream and cold drinks, dolphin and snorkeling expeditions, and dolphin woodcuts. They pitch their wares with the patience of Job.

Among the pitched things are also happy hours at the local bars. One of these offers pitchers of cocktails for 25,000 rupiah, or about USD$2.50. The bar has seen a lot of traffic but is now empty and the wait staff superfluous. The walls are covered with drunken, enthusiastic scribbling - 'Bali rocks!' -- and the floor is wet from frequent swabbing of the sand. On the corner of the bar is a statue common to Bali, and a favorite among lascivious travelers. The statue is of a tall man with a distorted face and a foot-long dark red phallus, which he grips tightly in one of his slender hands.

Denpasar, the capital of Bali, is described by one guidebook as a "polluted disaster area." Sadly, the phrase is apt. It seems a city whose economic policy is to give everyone a minivan or a motorcycle and order them to drive the city's streets all day, the more noise and congestion the better. To support this industry, hosts of shops sell motorcycle helmets, hubcaps, motor oil, aluminum.

The waterways are a pearly gray. They convey discarded rattan baskets, trash bags, and the many flower-filled trays given in daily offering. The movie theater's former neon sign is cracked and almost invisible. The escalator does not work and is littered with cigarette butts and candy boxes. The municipal trash cans overflow with twigs, leaves, and paper bags.

In the bathroom of a hotel is a Western toilet, but the reservoir, whose top is missing, is empty of water and filled with trash. The terrace offers a view of stained cement and palm trees, birds in flight and TV antennae -- a catalogue of piecewise contrasts.

In Bali, the kites are as much fixtures of the sky as the sun, and nearly as numerous as stars. Even here in Denpasar they can be seen. But here, many kites are caught on telephone wires and abandoned. It is a haunting symbol of development's costs.

And as the plane lifts off from this land, the women, who fifty years ago would have danced their endangered dance, now hand me a set of headphones, to hear their once endangered music.