The Barrio's Bread and Butter. 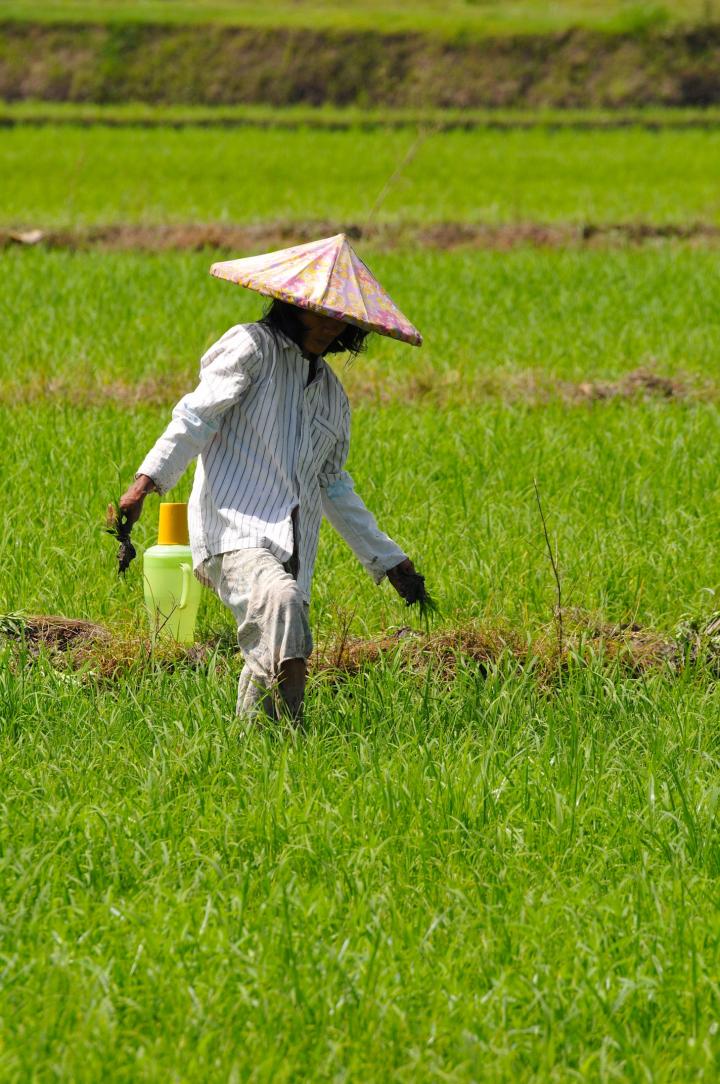 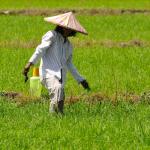 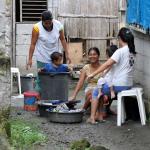 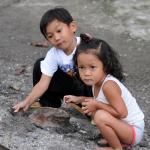 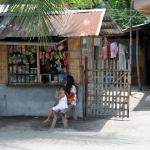 A barrio can best be described as a small rural village; the word is in fact a Spanish phrase meaning district or neighbourhood. These closed communities are scattered throughout the province of South Cotabato, on lush mountain slopes and between multi-coloured rice paddies, most of them nestled at the end of countless, unnamed, winding roads, tucked away under verdant palm trees that give shade during the scorching midday sun. Life in an average barrio is simple, somewhat out-of-the-way from the goings-on in the cities and not spoiled by the modern world. The pulse of time has remained unchanged, every day's habits are governed by traditions and customs that are shaped over many generations, the pace of life is slow, laid-back and peaceful. Everybody knows everybody; together sharing the joys as well as the sorrows of their own lives and of those around them, getting along unhurried and appreciating the good things that Mother Nature is giving them. Families have a strong sense of commitment to their place of origin, their roots are planted deeply in their own hamlet and they will not move to another quickly, from cradle to grave their barrio is their whole world. It is the place where they were born, played in their childhood with brothers, sister's nieces, nephews and friends, got married, raised their own children and will be the place where they will grow old and eventually die.

Many villagers are, in one way or another related to each other, in a barrio traditional family values remain a common rule, their existence revolves around the extended kinship and other relatives. These warm-hearted people, also feel a strong obligation to stand by their neighbours and others who are in need, this ancient practice better known as Bayanihan, is characteristic for the Filipino way of working together for a common good in a spirit of charity and faith. Moreover they are widely known for being profoundly hospitable and friendly, strangers are treated as welcome guests and the host family will make every special effort to please their visitors; no matter the time of day, there is always something to eat and drink, even if they endure adversity themselves at that moment. But life in the barrio is not as romantic and sweet as it seems to be, it is also a harsh life with a continuous struggle to survive under often problematic and primitive living conditions with only the basic amenities. Homesteads are for the most part self-made, constructed out of bamboo plants that surround the barrio, roofs are made with rusty corrugated sheets that are covered with old rubber tires, in many occasions' entire families are sharing one house or settle close together on the same lot. Proper sanitation is hardly at hand; a creaky, wooden shack with a hole in the ground serves the purpose. There is no running water available, they must rely on deep-wells with simple hand pumps for their daily supply, the water is used for drinking, cooking, washing clothes, dishes and bathing, and sometimes several households have to share one pump. Making the best out of a bad situation the women are using the tap as a hangout to get together, exchange the latest gossip and discuss family matters while whining toddlers are clinging to their legs and a bunch of older sprouts are fooling around. Conventional principles in the barrio commonly sanction the value of large families, having many children brings joy and prosperity and birth control remains largely out of reach. Electricity may also be difficult to come by, not all the houses are connected or there is no power supplied to remote areas, many villagers use oil-lanterns and candles to light their homes. Nearly all roads are in bad condition; during the rainy periods water is flooding the muddy paths, making them hard to get around or even impassable. Houses that are not built on stilts are flooded as well, destroying the scarce possessions people have and forcing them to seek temporarily shelter.

Year after year, life in the countryside follows the rhythms of the seasons of planting and harvesting, the natives have to depend on their work as a day labourer in the surrounding rice- and corn fields or village rice mill; some rely on growing vegetables or raise livestock and poultry to provide for their daily needs. A few will make a living as a blacksmith or carpenter, only a handful manage to find employment elsewhere, others sell home-made food on the side road, operate a small sari-sari store or work as a tricycle driver to earn a few extra pesos to make ends meet. In many circumstances this will never be enough to provide the necessary schooling for their children, even though free primary and secondary education is open to all children, a large number of parents cannot afford the fees for books, meals and school uniforms. Their youngsters often try to find work as housekeeper, baby sitter or roam the streets selling small items in the hope of making enough money to eat and to help support their families. For these kids there will be little or no significant improvement in living standards, being caught in a vicious cycle of ubiquitous poverty, they have no choice but to stay in their barrio, get married at a young age and start their own family. Hoping and praying, just like their grandparents and parents did, that their children will have a better life. Praying for better days is solidly embedded in the barrio culture; religion holds a central place with rituals and ceremonies, providing continuity and stability. Although being predominantly Christian, provincial devotion is coloured with many influences from different beliefs, firmly entrenched superstitions and indigenous wisdom that have withstood the passage of time. The reliance in the supernatural is pervasive and the use of faith healers for relief from all ailments is widespread; witchcraft is until now practiced and shamans are still and all called upon to connect with the spirits to bring prosperity and to avert misfortune and evil.

Despite the on-going hardship, never-ending deprivation and tough times that may still lay ahead, these underprivileged dwellers are satisfied and happy, it is almost impossible to break the barrio spirit. Their down-to-earth attitude displays a strong will and the avidity to have a good life, under any given conditions, coping with everlasting uncertainty and day to day problems. To show their gratitude for the small blessings in life, a barrio fiesta is held at least once a year; locals are wearing their best clothes and pay tribute to the local patron saint for good health and a bountiful harvest. A barrio fiesta bonds kith and kin together, provide a sense of unity and are celebrated with music and ethnic dances that are illustrating the uncomplicated life in the countryside and backbreaking work on the rice fields. For most men a barrio fiesta also means spending a part of the very little money they have earned on a couple of bottles of rum, tuba and beer, drinking and talking under the papaya trees and singing along with a borrowed karaoke machine until the wee hours of the morning.

When the fiesta has come to an end, life in a barrio is an array of tranquillity and serenity; the only sounds that can be heard are coming from the wind blowing through the numerous rice fields, the rush of water from nearby rivers and every now and then a passing jeepney blowing its horn from a far distance. At early dawn, when the rising sun starts to glow over the horizon, a pandemonium of twittering birds, playful children, crying babies, crowing roosters, barking dogs, croaking frogs, grunting pigs, chirping lizards and crickets is a welcome reminder for the folks to start their daily routine once more. The lingering smell of burning garbage, the cooking of rice on charcoal, the fragrant freshness of the morning dew, the sights of cigarette smoking men, wearing their typical cone-shaped salakot, riding on the back of a massive long-horned carabao to the wet paddies and women dressed in a colourful malong, hanging out laundry to dry on make shift lines creates a mesmerizing impression of rural life. The way of life in a barrio provides a fascinating peek into the local history and old traditions based on family moral, mutual respect and perpetual hope, a unique culture in which the very purpose of life is to seek happiness. People know life is short and they only get to live it once, their key to fulfilment is the appreciation of what they have, not longing for things that are unreachable and remain contented with the situation they are in at any time.

Barrio residents are often, incorrectly, named landless peasants, are, unfounded, considered of lower class and decidedly treated as second-rate citizens, for that reason they share a vigorous and common sense of pride and defiance towards the disapproval and exclusion that urban society places on them. But no matter how much criticism and many challenges they have to face, for them it is the only life they have ever known, it's an inseparable part of their identity it's their barrio, their home; it is their bread and butter.