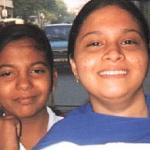 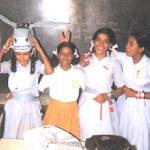 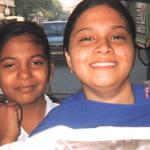 Before my six-month sojourn in India, I paid a visit to an Indian friend of mine in America, who had visited India for about the same amount of time.

"Were you glad to be back in America?" I asked.
"For about two days," she said. She said she envied me for going. "Why?"
"Oh," she sighed, wistfully. "People have no shell in India."

I was not even treated to two days' gladness at returning to America. When my plane from Bombay landed at JFK I felt only ambivalence. I was hoping that I would be moved to kiss the ground, but I wasn't moved at all.

I was extraordinarily relieved to pick up a pay phone and hear a dial tone, to follow signs to the things they signified, to need a paper clip and find one. Like the character in the popular Indian book The Inscrutable Americans, about a naive Indian's first visit to America, I "very much enjoy drinking 37 glasses of Coca-Cola." But the old, familiar loneliness and ennui of America had lodged in my heart once again.

My friend had been right about people having no shell in India. There is no clear demarcation between people. Egotism is anathema. People seldom talk about themselves. "One should not take pride in one's accomplishments," my students wrote in their journals. To them, the provenance and credit for accomplishments lay in God. I remember being bound for Bombay on a Lufthansa jet. For reasons I can't remember, I declined lunch. When I declined dinner also, the Indian airhostess asked me, suddenly but with an anonymous kindness new to me, "Do you eat?" How little I knew how typical this question would become.

Within hours of arriving in Bombay, I walked from my flat in Malabar Hill to Chowpatty Beach, a filthy trash-strewn strand. Men in only loincloths washed their clothes on the rocks by a cavity bubbling with water. People were weaving, sleeping, eating, and playing cricket. Some stood in the sea itself netting fish with dragnets.

When I first visited Indian schools, I was all but thrown into every class and introduced. The kids made every effort to wave and smile. I asked a Hindi class "Kaise ho ap?" ("How are you?") to which they cheered "Acche!" ("Good!") I had never felt such warmth.

People lack a shell in part because they lack personal space. Bombay has a population density over 10 times that of London's. On the trains and buses people are packed quite literally like sardines. Just to board the trains requires the abandonment of proprieties. Twenty people try to get themselves through the entry, elbowing each other in the face and taking blows to the gut.

Necessity is not the only reason. The culture does not regard touch as intrusive or provocative. Both women and men walk down the street holding hands, or arm-in-arm. When my students grabbed my hand unexpectedly to tie ribbons around it, they thought nothing of it. I learned to think nothing of it. In America, I would have worried about what educators call "boundary violations". I would have worried about lawsuits. It's a difficult thing to get through a function or a bus ride without striking up a conversation. My American colleague and I were approached by and ultimately went out to dinner with four chaps from the air force in Dalhousie. We talked international politics with army guys on a train to Bombay.

Once I was eating a masala dosa by myself at a Bombay restaurant. A family bumped a young man out of his table, putting him directly across from me. This social dilemma is a commonplace. So I said the Indian 'halo'.

"What is your good name?" he asked. We chatted for a while. But he was too eager, and I too remote. After we had walked and talked for a while, I parted with him. He thought the parting premature. "Am I boring you?" he asked, somewhat crestfallen. I wanted to explain to him that as children in America, we are told not to talk to strangers.

In India people are joined by threads of song. Students were always trying to get me to sing: "One song, sir. One song. It can be an English song." They were somewhat disappointed in me for not singing more. It seemed I knew no English songs, at least all the way through. On the last day I spent with my 8th-grade class, we spent the whole time singing, or, rather, I spent the whole time listening. They sang "Old MacDonald"; a song about a halvawallah - "he's a very dirty fellow, his teeth are almost yellow"; and love songs from Hindi films. We sang "Pardesi Jana Nahin" ("foreigner don't go") together, and then I sang the first few verses of the blues standard "Summertime".

A student once told me that she'd seen the Hindi film Pardes ten times. Students see Hindi movies more often, get to know the songs; the atmosphere is celebratory; lines are anticipated, villains booed, songs sung under the breath.

On Teacher's Day, teachers were talked into singing to the students, and teachers sung under their breath as they plowed through stacks of terminal exams. People had an enormous catalogue of Hindi film songs. A popular national game was to link such songs together by their last and first words. When I was asked to sing, I would say grumpily, "Americans don't sing." People danced as much as they sang. On Children's Day, a representative of the 10th-grade kept coming to the door of the teacher's room to say "Come watch us dance." (I found it a challenge to stay in one place in India. "Come, come," is a politely, but somewhat impatiently given order that I came to hear in my sleep.) Children's Day was a premeditated anarchy, so I eventually went up. The whole class was in a circle, perched on desks and chairs, clapping and shouting while one student stood in the middle and danced. The student dancing was replaced. This went on, for all I knew, for most of the day. When a girl executed a particularly risqué move, the others roared and giggled and looked over at me. I began to understand Nehru's description of the Vedas as "hymns to life".

Fortunately, I had different forums for learning about Indian dance and the Indian passion for it: the auditorium and the street. Every few days there was a dance recital at the Nehru Center for the Performing Arts at Nariman Point, often of bharatnatyam, or Indian classical dance. The local competitions displayed a bewildering array of folk dances. The level of talent for the age was incredible, but so was the lack of pretense. The Indian children displayed a living culture in their dance. When I told an Indian friend that Americans didn't dance that much, she said, with a little pity in her voice, "Indians dance at the drop of a hat!"

Sometimes it takes the drop of a rupee note. While sitting on my flat's verandah, my roommate and I heard what sounded like a New Orleans drum-and-bugle band. We had seen such bands taking five amidst Bombay shanties. Sure enough, ten minutes later just below us were four guys with drums and horns and a colorfully dressed and beribboned girl, dancing up a storm. When they finished, they looked up. One man held a pan. I threw a crumpled Rs. 10 bill from the railing. The man who caught it tugged at his own tattered shirt and waited for more.

Clothing and self-ornamentation of other kinds also displayed the vibrancy of Indian life. Mahendi, the decoration of hands and feet in elaborate designs using the dye henna was loved by teachers and students alike. They showed up to school with hands webbed with lines and paisleys. Even the women's clothing suggested an artfulness: ornate and variegated saris and salwar kameezes, nose and earrings, bindis and bangles. I used to love to watch the trains - whose cars are segregated into "gents" cars and "ladies" cars - and wait for the explosion of a rainbow when the ladies car passed by.

Festivals provided their own rainbows: Janmashtami - the birthday of Krishna; Ganpati - the festival of Ganesha, the elephant god; a celebration of Durga - the mother nature goddess; Dandiya festivals; Diwali. I watched as crowds painted in blue formed human pyramids to dislodge a butter pot two stories up; passed a neon-wild procession of a Durga effigy through dark and smoky streets; witnessed Ganesha's immersions, drums and frenetic dancing, strings of fireworks lighting fire to the night. And one night, reluctantly, I took part in the Dandiya festival.

At about 9:00 every night for a week, the drums started. They sounded like they were miles away, and yet they filled our flat. Overlaying the drums was a disorderly melody, played by what sounded like a flute but turned out to be an electric guitar. The music played for about three hours. As haunting as it was, it created a strange sense of community: I was hearing the same music as thousands of other people. I had the same feeling hearing the call to prayer arise almost simultaneously from three or four different mosques in Hyderabad: it made the world seem smaller.

A dandi is a sort of stick; dandiya is the Hindi plural. Signs all over Bombay advertised a dandiya raas, or dandiya party. One night as we walked toward our flat, we found the source of the music. Some two or three hundred people were gathered in a parking lot. About a hundred of them formed two concentric circles, moving in opposite directions, each person holding a dandi in each hand. When a person in one circle encountered a person in the other, they hit their sticks against each other's and against their own in a 5-step pattern.

We stood and watched for a while from a safe distance. But some other spectators soon approached us and asked us if we wanted to join. My friend took them up on it immediately. I too ultimately joined the dandiya raas, and learned its deep mystery: that it was no more mysterious than a square dance. The social precept at work in both is the same: it is healthy for strangers to look each other in the eyes.

Small things told me I belonged in India. Perhaps it was the gentle soprano voice of a young Indian woman across the car from us in a northbound train; the simple yellow floral pattern of a young girl's frilly dress; our friendly waiter smoking bidis in the area outside of the AC compartment, offering me his seat.

I was with two friends, one German, one Indian, in a jazz bar downtown. The German proposed that India had something the West did not. As he pondered what it was, the Indian said, "Warmth."