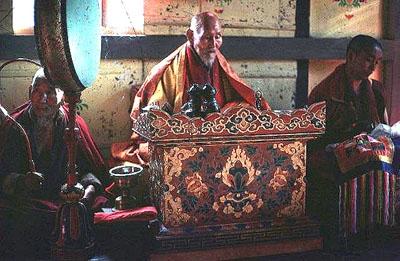 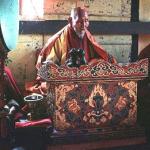 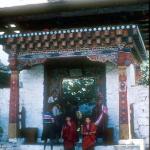 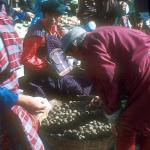 As the twelve seater aircraft began to nose into the precipitous valleys of the eastern Himalaya, I began to wonder if my journey to Bhutan was such a good idea.

Only a month before, I had been startled by the arrival of a large envelope plastered with odd-shaped stamps - a  reply from the remote mountain kingdom of Bhutan to my half-forgotten enquiry, weeks earlier.   Visitors welcome, please confirm your seat and bring greenbacks galore.

I took the plunge and on reaching Calcutta found my name duly listed on the manifest for the connecting flight on Druk Air, Bhutan's minuscule airline.

The Bhutanese, closely related by religion and culture to their northern neighbours in Chinese-occupied Tibet,  subsist through farming their remote and fertile valleys.

Bhutan is determined not to jeopardise traditional values through mass tourism, as in Nepal, to its west.  Visitors are strictly rationed and gently milked for maximum returns: backpackers need not apply.   The country's young monarch states his goal to be growth in Gross National Happiness, an indicator not usually found in the  lexicon of World Bank officials and development aid experts.

Now we're dropping into a misty, emerald valley peppered with half-timbered homesteads.  This is the Paro Valley, 7000 feet above sea level.

Ears popping furiously, the disembarking passengers stumble into a solitary bungalow.   Robed in his traditional coat, a lone civilian from the Ministry of Foreign Affairs dispenses impressively-ornate visas.   Around us the Bhutanese faces reveal their Mongol origins, so different from the Bengalis of the city we left behind.

Greeted by my own personal guide, I was driven around the valley and into Paro, a one-street township with a dzong or Tibetan-style fort perched above the river.  At the Olathang Hotel I was shown to a detached timber cabin with its own pot belly stove: rustic but comfortable.  Dining in solitary splendour I chose from a table spread with exotic delicacies.

Next day, the sights of Paro ... all around, terraced rice fields climbed towards the ceiling of low cloud.  Chile peppers spread out to dry on shingle roofs added a splash of vermillion to the lush green and nut-brown.
Around the valley were spread chortens, holy domes flying tattered prayer flags and at its head a snowy pass and a ruined fort marked the point where Tibetan invaders had been repelled centuries before.

As in medieval Europe, Bhutan's dzongs were both fortress and monastery, the nucleus of these feudal communities.  Adolescent novices, shaven-headed and red-gowned, shared the rice pot.  Older monks read from scriptures inscribed in Tibetan script on pages enclosed between carved boards.  As they read, the monks beat time on small drums.

My guide duly took me out to the Taktsang (Tiger's Nest) monastery, founded in the seventeenth century by a holy man who arrived in style, riding on the back of a flying tiger.  The monastery buildings clung perilously to a vertical cliff face above a broad, flat valley, and were comfortably reached on horseback in the absence of flying tigers.   Recent reports described severe fire damage to this national icon, which the Bhutanese will surely rebuild as fast as resources - and time-honored construction techniques - permit.

Moving on to the capital, Thimpu, entailed a drive of several hours on narrow roads weaving through the valleys.  Thimpu was a larger version of Paro; the main street is somewhat longer.

On the river bank stood Tashichho Dzong, the spiritual and secular heart of the realm.  Here ragged pilgrims from the provinces prostrated in prayer, spinning each and every brass prayer wheel to recycle the prayers inscribed within.  Murals and richly painted tangkas, sacred banners, depicted saints and demons of the Tibetan pantheon in lurid, glowing detail.   The mandala or wheel of life was a recurring theme.

Another day's excursion wound up over ten thousand foot passes to Punakha, once the kingdom's capital, and nestled in a deep valley enjoying a sub-tropical climate.  In the marketplace I met people from Lunana up near the Tibetan border - snow leopard country.  Standing apart in their somber homespun and conical bamboo hats, the highlanders seemed wary enough of the valley people, let alone the visitor from another world.

My week nearly up, I was returned to the Olathang Hotel at  Paro.  After dinner our small contingent of guests was pleasantly surprised when a traditionally-garbed Bhutanese materialised to introduce  himself as a postal official and open a folder full of elongated, circular, triangular or even gold-embossed postage stamps.   Smart thinking...

Last morning in Bhutan.  We stamp our feet to keep warm in the cold morning mists, as a half-dressed air traffic controller folds up his camp bed in the next room of the tiny terminal.  The arriving prop jet taxies up to disgorge its contingent of aid and trade experts.  Bhutan is on the move, albeit with ear and eye tuned to preserving its unique culture and environment.

The only way to visit Bhutan is by purchasing a tour package from an agency approved by the Tourism Authority of Bhutan.  Independent budget travel is not possible .  Access to monasteries and border regions may be restricted.  Best time to visit is April to mid-June.  Connections with Druk Air http://www.drukair.com/  services are via Bangkok, Calcutta or Kathmandu.