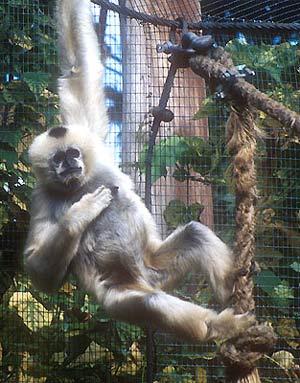 White-handed gibbons [seen here in an Australian zoo] distinguish themselves by swinging from branch to branch rather than jumping like the langurs. 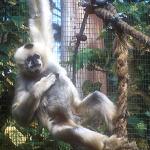 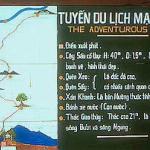 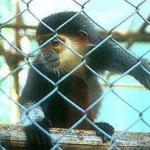 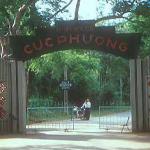 Despite the ravages of war, Vietnam's rainforest national parks still harbor almost-extinct primates and Javan rhinos - plus leeches and 17 species of snake.

Forest is gold. If we know how to conserve it we will be very rich. A quote from that eminent conservationist, Ho Chi Minh, who took time out from waging war in 1963 to dedicate Vietnam's first national park, Cuc Phuong, an island of primary rainforest sandwiched between two ranges, south of Hanoi. In the stifling heat of mid-afternoon our minibus bounces along a narrow blacktop, following an embankment which cuts across the emerald rice-bowl of the Red River Delta.

Meandering between the sophistication of Saigon and the more austere charms of Hanoi we hoped for a few hot-and-sweaty experiences off the beaten track, deep in the forests which, against the odds, have survived war-time defoliation and the depredations of hunters and timber-cutters.

Our guide is to be 26-year-old ranger Tien, who, like his colleagues, is working on his English. Raised in this district, Tien is still single and gets home to his village just twice a month. Inside the dusty museum, we ponder the scale model of this 80-square-mile enclave of rainforest, a tempting reservoir of game, lumber and other booty for the villagers dispersed just beyond its boundaries.

Not too far from here, a foreign biologist wandering through a rural marketplace in 1994 noticed the severed head of an animal he had never before encountered: the Sao La, a sizeable mammal then unknown to science.

Down the road is the sanctuary of the Endangered Primate Rescue Center which conserves no less than five species, mostly langurs - leaf-eating monkeys, timid creatures with big round eyes - surviving nowhere else. Funded by a roll call of American and European zoos, ten Vietnamese keepers and two European scientists play nursemaid to fifty primates, most confiscated from hunters or traders.

The Delacour langur remained all but unknown until its re-discovery here in the late 1980s. Less than 200 survive. Jonathan, four months at the time of my visit, is the Center's second baby Delacour and his fur has begun to turn from bright orange to an adult black. A family group can only tolerate one adult male so Jonathon will soon be moved out. Off with you then, bunk in with the other wise guys and pick up your own broads.

Why not take home your very own pigmy loris, an appealing little bundle of fur with eyes like saucers? Ten thousand Dong, a few dollars, is all it costs in any animal market in Vietnam but even if the wee creature doesn't snuff out from sheer fright or infectious disease, as do so many in captivity, the law takes a very dim view indeed. Gibbons, which distinguish themselves by swinging about rather than jumping like the langurs, roam about their own stretch of jungle, secure behind an electric fence.

How many creatures does the Center release back into the wild? "None," says Ulricke Streiser, the cheery vet from Hannover, "Even a single Delacour [or Hatinh] langur would be a real loss to the species population." Within the national park, hunting is not yet under control and tree felling has changed the natural habitat.

Animals released now would just go back to the trade: forget your Viagra, Chinese gentlemen prefer an ape's penis or two. Safe behind the chicken wire, the critters can chew happily through their favorite greens, unlike many exotic creatures picking listlessly at dinner in zoos around the world.

Homo sapiens did live in harmony within this eco-system for thousands of years. Tien leads us up to the mouth of a cave in which sticks of incense now smolder on the low mounds where human remains lay undisturbed for 7,600 years.

Fireflies in the blackness, night stars above the treetops: a night in the guesthouse at Cuc Phuong, sweating quietly under our mosquito nets. Bare-chested rangers knocked up a good stir-fry of squid, chili chicken, marinated beef, mysterious greens...

It's late July and the thermometer hovers close to a century Fahrenheit at nine-thirty next morning. Spattered with sun cream, grimacing under gallons of bottled water - twice already on this trip I've nearly collapsed with heat stroke - we step onto the Adventurous Trail (sic), and into the forest, bound for the northern reaches of the park. Seventeen species of snake lie in waiting...

Jane promises us a long day's march along a route bristling with beasties. Fortunately, the forest canopy deflects the pitiless sun for most of the day and the unseasonably dry conditions have sent the leeches into hiding. Those yawning black openings under boulders and tree-stumps are sinkholes, bottomless pits trapping the unwary. Big black spiders lurk in golden webs. High in the forest canopy, red-bellied squirrels set the branches shaking as they leap about.

Wild ginger, lithe lianas and staghorn ferns divert our eyes from a trail which winds up and over giant tree trunks, one freshly felled.

Destruction of the forest will lead to serious effects... said Ho Chi Minh. Tien assures us that several culprits are now behind bars. Uncle Ho would be pleased...

Describing in his cautious English the herbal remedies for muscular aches, Tien starts to reveal a rich vein of local lore. His snakebite prescription isn't put to the test but his poultice for leech bites seems to do the trick.

Late in the afternoon we emerge above an elevated valley, the symmetry of its vegetation revealing patterns of cultivation before the local Mu'ong people were moved on.

Another hour and we stumble wearily down into a symphony in green, a valley of terraced rice fields sheltered by ridges of a darker hue. Bells tinkle as the urchins muster the buffalo down into a hamlet. Power pylons marching across the far horizon evokes those old Communist Party billboards proclaiming Progress.

Ong Co ("Pop" Co) is the grizzled 65 year-old patriarch of Khanh village, grandfather of 25 and model citizen (there are certificates pasted to the rafters to prove it). Except when he's plastered on rice wine and has to be tucked into his cot. Co presides over three generations sharing a sturdy timber home raised on stilts. With Co's womenfolk watching in the wings, we ease onto our haunches (ouch!) to join the men sipping the sticky sweet wine through straws.

As the rice wine recedes and the bamboo water pipe does the rounds, the ungainly visitors provide more amusement than the television. Especially as there isn't enough juice to run it simultaneously with the naked light globes.

It seems a happy instance of low-impact travel - although our own contribution has been filtered through the park office and we can only wonder how much stuck to the sides. We too, bed down eventually under the mosquito nets. Fancy a wash-up first? Watch your head on that overhead beam, careful as you wobble down the steps, go easy on that muddy trail in the dark...

Without maps or signposts, trekking alone would be foolhardy. Travel agents in Hanoi and Ninh Binh can arrange treks and accommodation in park guesthouses or in the Mu'ong villages just outside the Park.