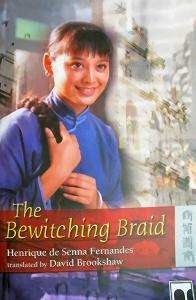 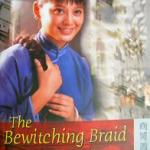 Henrique de Senna Fernandes' The Bewitching Braid (Hong Kong University Press, 2004)begins as a simple fairy tale, and for the first fifty or so pages it seems the story will offer little in the way of depth. Beginning in the Macau of the 1930's, the early part of the tale follows a young Macanese from a respected & wealthy Portuguese background known as "Handsome Adozindo " as he seeks to conquer his way sexually through the well-heeled women of the colony's "polite society." Despite - or perhaps because of - his debauched, dilettante ways, Adozindo is the envy of Macanese high society, and in the book's first chapters his only problem seems to be just how long he can forestall making a commitment to an extraordinarily rich & beautiful widow with whom he's also having an affair.

Adozindo 's philandering life takes a fateful turn the day he stumbles into Cheok Chai Un (one of Macau's poorest quarters) and runs into A-Leng, a poor but proud water seller (and the possessor of the braid from which the story gets its name). Were Adozindo to fall in love with her and abandon his life, clan and social standing to be with her, The Bewitching Braid would easily live up to reader's expectations as a simple romantic fairy tale. However, his pursuit of A-leng has less to do with love than love of pursuit. That the handsome Adozindo will successfully woo and deflower the poor Chinese water seller is a foregone conclusion; however, it is after his conquest that the story, along with its characters becomes (much to the author's credit) less a fairy tale and more a three dimensional story of life. Although Adozindo is intent on leaving A-leng in shame, something profound happens to him after his conquest as the consequences of his actions - on both of their lives - dawns on him.

From this point, the tale becomes more three dimensional as we follow this young couple from the most diverse possible backgrounds as the two, both ostracized from their own worlds, struggle to create their own world together in Macau during the years immediately before, and during, the Sino-Japanese war that is the story's backdrop.

The Bewitching Braid is a pleasure to read on a number of levels; from a historical & sociological standpoint, Henrique de Senna Fenandes paints a charming watercolor of a bygone culture and community of pre-war Macau. The author resists portraying Adozindo's transformation from spoiled foppish dandy to a man worthy of the reader's respect as some "bolt from the blue" moment of enlightenment; rather, this change takes place like most real life transformations tend to, namely at such a slow pace that the subject is barely aware of them.

There is no one "Wizard of Oz" moment in the story, no point in which the screen changes from black and white to color to reflect a dramatic shift in narrative; however, readers clearly become aware before the story is even a third through that the author's very descriptive style has changed in a subtle fashion, reflecting the gentle shift in the story from romantic fairy tale to a more realistic tale of cross-cultural partnership.

More jaded readers will be tempted to write The Bewitching Braid off as a naive fairy tale; indeed, little in the author's prose in the first 50 or so pages give any indication that the rest of the book will offer anything but. However, readers who follow the story past this point may well be surprised at the subtle depth and charms of the tale as a whole. Certainly not an essential read, but a charming one nonetheless.