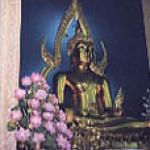 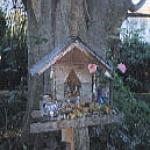 To consider yourself part of an organized, well-established religion, you need not know much, or indeed anything, about its past, its prophets, or its precepts. Hundreds of millions of illiterate Hindus have never read the Bhagavad Gita; many Christians deny that Jesus was a Jew; many Muslims drink alcohol. Likewise, many of the 90 percent of Thais that are Buddhist know less about Buddhism, and are less Buddhist, than you or I.

This is not to slight Thai Buddhists. Fish, as the philosopher Imre Lakatos said, are not experts at hydrodynamics. Fluency in English does not make you an English teacher. Similarly, an adherent to a religion may not understand its principles. Even the rare exception may set forth these principles in a static form, which misleads us as to the living faith: Rahula's "What the Buddha Taught" may not be What Buddhists Believe.

Thais are Buddhists roughly to the same extent that so-called Christians are Christians. Both religions, over two millennia old, would be unrecognizable to early practitioners and bear stark contrasts to canonical texts. Both religions had to adopt and destroy elements of the religions of their converts. Middle Eastern Christianity is to European paganism what Indian Buddhism is to Southeast Asian animism. Most Thais are Buddhist, and most Christians Christian, not by individual choice, but through historical accident and social conformity.

As a result, Thai Buddhism is not pure, but a blend of at least three rather disparate systems of belief. One is Theravadan Buddhism: the belief that the Buddha was an enlightened man whose teachings provide a guide to worldly happiness and otherworldly advancement. Another is animism or superstition: the belief that spirits inhabit natural things, or that supernatural forces influence natural events. The last is "Ramayanaism": the belief in the legendary, divine or semi-divine characters populating the Hindu epic Ramayana.

Many religions have two versions: one for the priesthood and one for the laity. Few Catholics understand St. Thomas Aquinas, but they can understand the Ten Commandments. Few Buddhists understand the Buddha's theory of "dependent origination", but they can understand - though they may not remember -- the Eightfold Path. Catholics do not undertake the austerities of saints, and Buddhists generally do not meditate. For Buddhist monks, there are over 200 vows -- for the laity, only five.

The five vows of Thai Buddhism -- don't lie, don't steal, don't commit adultery, don't kill living things, and don't get drunk -- are similar to the Ten Commandments in that they provide a concise guide to ethical conduct. But while breaking a commandment is sinning, breaking a vow is more like blundering. To underscore their difference from the absolute "thou shalt not"s, the vows are phrased using the word "avoid", as in "avoid drunkenness" -- for your own health and happiness, not because drinking is a priori and absolutely immoral.

Because the vows are more akin to recommendations than commandments, they are followed to widely varying degrees. A great many Thais eat meat and drink whisky. According to a recent Time poll, 58% of Thai men and 26% of Thai women have been unfaithful. Thais may not lie or steal so much, but their notions of truth and private property are slippery at times.

Nevertheless, to violate the spirit of a vow has consequences because of the mechanisms of kamma -- the karma of Sanskrit -- and reincarnation. Kamma links one's actions with one's fortunes, either in this life or another. A murderer may come back as a dog in a future life, or he (or someone else beloved) may be murdered in this one. A virtuous woman may be a man in a next life, or be fortunate in this one, or both. The connections between actions and consequences are not set in stone, but if you break a vow, you should expect to pay for it later.

Because good deeds lead inexorably to good fortunes, the Thais perform good deeds with the attainment of good fortunes in mind. This performance is called "making merit." Merit can be made by something as small as informing someone that he has forgotten to turn off his headlights, or by something as large as making a trip to an important temple. The Thais view this accumulation of merit very practically. It is to the soul what regular exercise or an annual check-up is to the body. Or, put another way, every Thai has a sort of spiritual bank account. Doing bad things are withdrawals; making merit is a deposit. You try to keep your soul in the black, as it were.

Kamma and reincarnation come straight from the Buddha's mouth. But like many other Buddhists, the Thais worship the Buddha in a way he would not have favored, that is, as if he were a god. They prostrate themselves before highly-prized Buddha images and often refer to the Buddha as "Lord." But like Jesus, the Buddha is usually considered et vir et deus -- a man who lived a life on Earth like any other, but whose godliness remains a subject of debate.

Yet for a nation identifying itself so completely with Buddhism, a preeminently rational, analytical system of belief, Thailand retains a host of pre-Buddhism superstitions. Some are now effectively inseparable from Thai Buddhism itself. Christianity has its angels, the Eucharist, and even the Christmas tree - all "pagan" things incorporated into the religion to make it more accessible to pagan converts. Likewise, Thai Buddhism has spirit houses, ghosts, and an assortment of "old wives' tales" purporting to explain the workings of the natural world.

Spirit houses are shrines in the shapes of houses, populated by figurines. It is believed that the houses contain the spirit of the land on which they are built. Offerings of flowers, incense, candles, and food are placed on the house's "front porch", special attention being given on prominent Thai religious holidays. Just about every Thai household or business has a spirit house nearby; even taxi cabs contain small versions on their dashboards.

The spirit of the land is not the only one. Projecting from the eaves of many Thai-style buildings are two gah-lae, or wings, which are meant to ward off evil spirits. Benevolent spirits, meanwhile, can enter homes and manipulate physical things. One such, called a "hungry ghost", is sometimes to used to explain otherwise inexplicably empty trays of food, and sometimes appears in human form.

This admission of the supernatural also takes the form of ascribing physical events to nonphysical causes. If you sneeze, for example, it means that someone, somewhere, is talking about you. If you arrive at a gathering where people have been talking about you, you can expect to have a long life. If you dream of ghosts, good luck awaits you. On the darker side, if you mention a misfortune prior to its happening, e.g. "I hope I don't crash my car", the misfortune is more likely to occur. Thais also have a phrenology-like system of determining a person's character based on the location of moles on his face. Facial hair, meanwhile, is a sign of dishonesty, which may go some way to explain the Thais' widespread distrust of moustached Indians.

Ironically, despite this distrust of Indians, the final component of Thai "Buddhism" is Hinduism. The Hindu epic Ramayana relates the struggle against evil made by one Rama, a sort of warrior-god, embodiment of moral perfection; his devoted and longsuffering wife Sita; and a spirited and helpful monkey-god named Hanuman. The tale is arguably as important to Thailand as to South India, its place of origin. Every child learns it in school; its episodes are depicted in Thai classical dance, and on murals and in the statuary of Thai temples; and every king of Thailand -- the last nine of whom are named Rama -- commonly writes a new version of its events.

Thailand and its predecessor, the kingdom of Siam, have always had a reputation for being open to disparate beliefs and lifestyles, and for assimilating them peacefully into their own. Anyone disappointed to find that Thai Buddhism bears at times only a nominal similarity to the Buddha's ideas must remember this. Just as Christian missionaries failed to convert Thais, so early Buddhist monks failed fully to make Thailand purely Buddhist. The Buddha continues to jostle with the spirit of the land and Rama for dominance. Buddha images are erected alongside spirit houses within temples containing Hanuman. Thailand is probably over 90 percent Buddhist only because of a certain limiting set of checkboxes on a census form. The true religion defies easy classification and flouts dogmatism. This is its virtue, and in part explains why the land of the Thai is so enviably peaceful.