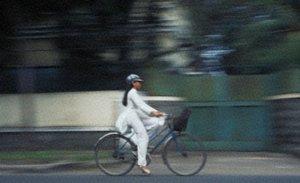 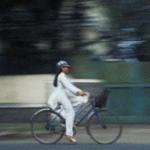 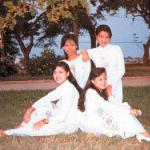 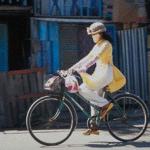 A swarm of motorized and pedaled traffic surges through the giant Tran Nguyen Hai junction. From amidst the seething pack, a vision of angelic splendor glides into view. Sitting straight-backed and proud on her bicycle, arms extended to the handlebars, is a Vietnamese woman. The train of her crisp white costume is held up in her left hand. It flutters like a wing. Her steady gaze befits her perfect posture. A crocheted cap with a spray of flowers adorns her head, and long gloves, her arms.

In Vietnam, these girls are known as butterflies. And as butterflies adorn a garden, they adorn the city's streets. The white costume is an ao dai, pronounced "ao zai" in the country's north and "ao yai" in the south. It is the national dress for women. As such, it is worn on ceremonial and formal occasions and as a uniform for school or work.

Yet, with all its popularity and ubiquity, the ao dai could hardly be called traditionally Vietnamese. In the country's long history, it is relatively new. Since its inception in the mid-eighteenth century, the costume has evolved to its present form through both a series of dictated dress codes and modernizing influences.

It was a decree handed down in 1744 that gave the ao dai its birth. It seems that Lord Vo Vuong of the Nguyen dynasty, an avid Confucianist, was intent on breaking down the old dress code. For his taste, it accorded far too rigidly with social class and status. The lord's solution was to simplify and standardize women's clothes. A Chinese-style high-buttoned coat and plain trousers would replace the traditional split-sided jacket and long skirt.

The new code might have served the purpose of the Nguyens, but its blandness and lack of femininity found little favor with the Vietnamese, a people with a famous flair for art and design. Modifications to the costume soon surfaced. While the trousers remained essentially the same (even subsequent Nguyen lords insisted on this), the high-buttoned coat was radically changed. By the 1930s, it had become a long embroidered tunic. A reform group known as the Tu Luc Van Doan used its influence to have the tunic lengthened even more until it almost reached the floor. Its sides were suitably split and the gaudy embroidery removed. The ao dai had evolved.

Ao dai literally means "long gown." The tunic, which can be of cotton, satin or acrylic, features a form-fitting bodice that extends to long panels in the front and back. These are split to the waist. When worn on a bicycle, it is the front panel that is held up on the handlebars. The back is folded on the seat. The neck is traditionally of the high mandarin type, perhaps the last reminder of the tunic's Chinese origin. The sleeves are long and tight. Ideally the panels fall just short of the cuffs of the trousers, which themselves are of satin and usually white. They can also be black. "Guocs" or high-heeled sandals usually complete the outfit.

When worn as a school uniform, the ao dai is totally white. Its only embellishment is discreet white embroidery on the bodice, and perhaps some lace on the trouser cuffs. Professional people-teachers, hostesses, and entertainers-may wear a colored tunic, but the trousers are usually white.

That the ao dai still finds favor with the fashion-conscious, young Vietnamese is testimony to its flattering design. Not surprisingly, it is eagerly sought after by overseas visitors as well, many of whom have ao dais tailor-made in downtown fashion houses or in the garment district of Cholon.

In the last fifty years, Saigon has absorbed an enormous amount of western influence, reflected in the city's architecture, food and fashions. The current craze is French-style hats and gloves. Their appeal lies not just in their aesthetic qualities; they are practical as well. Vietnamese women prefer a lighter complexion; hence the face-shading "non la" or conical hats worn throughout the land. For motorbike riders, as most of the Saigon ladies are these days, it is the fashionable French accessories that help keep the sun at bay.

Actually, it is when biking their way though the town that they look their spectacular best. An elegant gown, elbow-length gloves, crisp boater or crocheted cap, and a lace-trimmed handkerchief across the face make an outstanding fashion statement. It is still more striking and becoming when the bike is a pedaled one and the gown an ao dai.

Nor is this imposing look confined to Ho Chi Minh City. Ao dais and their chic accessories grace the streets of provincial towns throughout the land. For my part, I was wholly captivated by what really is a delightful amalgam of two famous fashion modes-French and Vietnamese; and captivated too by the Vietnamese girls and women who wear them. Like every other visitor to the charismatic Ho Chi Minh City, I would hope these "butterflies" will decorate the streets for generations to come. Somehow, I think they will.