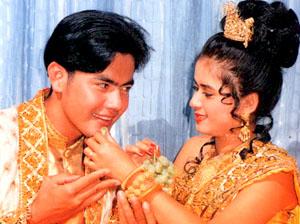 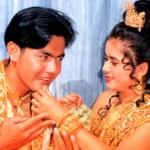 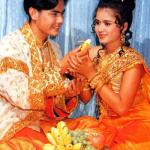 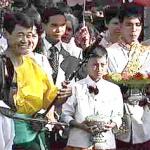 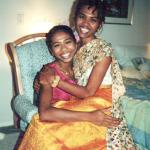 She was working in a factory in the 1970s when she was ordered by the Khmer Rouge commanders to assemble in the town hall. When she arrived, there was a group of frightened young people. Oum Shi's first thought was that she will be executed.

Instead, the boys and girls -- altogether 20 of them -- were paired up. Oum Shi, then 19, knew the boy across from her only by sight; they had never spoken.

The terrified village head, under orders of the genocidal Khmer Rouge government, told the young people to exchange marriage vows.

"There was a little speech that said, `Be faithful to each other'," she recalls. "That was it. We were married."

Such forced marriages -- imposed after the Khmer Rouge took power in 1975 -- insulted nearly every value Cambodians held dear. Trying to engineer a classless society, the Maoist-inspired revolutionaries paired educated with illiterate, urbanite with peasant, ugly with beautiful. Worse, for many, was that families were not involved in any of the marriage proceedings. This was a painful breach of legitimacy in a society where parents were expected to arrange or, at least, bless a marriage.

Most couples split up after the 1979 Vietnamese invasion toppled the Khmer Rouge. But some stayed together -- for their children, because they had nowhere to go, or because, against the odds, they had grown to love each other.

Oum Shi and her husband eventually moved to a town near the Mekong River after the fall of the Khmer Rouge in 1979. They are luckier than some - her husband obtained work with an international company in Thailand and they even lived in Hong Kong for a while. Just like many other Cambodian parents of shotgun weddings, Oum Shi wanted something different for her offsprings. They're willing to dig deep in their pockets to provide what they never had - a traditional wedding with lots of parental involvement. When her eldest daughter got married a few months ago, the occasion was rather elaborate.

In accordance to Cambodian tradition, Oum Shi and other relatives met and discussed the wedding proposal with the groom's family, which led to the engagement of the two at the beginning of last year. After choosing an auspicious day in March, Oum's daughter, Rel Li tied the nuptial knot with Sokhin Chanta in a ceremony which was steeped in tradition.

Cambodian weddings traditionally consisted of ceremonies and celebrations lasting three days and three nights. Three is considered to be an especially auspicious number by Cambodians because of its association with the "three jewels" of Buddhism: the Buddha, the Sangha (brotherhood of monks), and the Dhamma (the Buddha's teachings).

The first day is set aside for blessings from the priest for the couple and their family. In Sokhin's and Rel's case, the Buddhist ceremony was held in the temple. As it is a rather private and religious ceremony, the only guests present during this ceremony are close relatives.

During the wedding ceremony proper, the bride goes through 10 dress changes and takes time off to pose for photographs. The wedding began early in the morning with the bridegroom, dressed in traditional Cambodian costume, arriving at the bride's house. Along the way to the bride's house, the groom's procession will be banging pots and chanting, this noisy group sidesteps sleeping dogs and cyclo drivers, while serenading the backstreet population of Phnom Penh. Smiling people watch from balconies. Some send down a shower of flower petals. Flanked by two best men, the bridegroom waited at the entrance where banana trees were tied to the pillars.

To the chimes of a gong, the girl and her family approached the visitors, greeted them by cupping their palms, following which the bride and bridegroom garlanded each other. The couple walked into the house carrying a silver container containing flowers from the areca nut tree and other offerings. Young girls threw jasmine flowers along their path.

They knelt down and paid their respects to the bride's parents before offering prayers at a brightly decorated altar. Soon members of the bridegroom's family trooped in, carrying gifts on silver trays.

In Cambodian tradition, the number of gifts was an indication of the wealth of the bridegroom. Sokhin's family brought in 60 trays containing numerous items including several types of fruit, biscuits, cakes, sweets, soft drinks, beer, meat, vegetable and household items.

Some bridegrooms have been known to bring as many as 200 trays of gifts while those in the lower-income group are satisfied with about 10. These gifts and jewellery have replaced money as dowry. The bridegroom usually pays the dowry.

The trays of gifts are neatly arranged to fill the hall of the house when the master of ceremonies, a singer-cum-jester, begins to croon a song while his woman companion dances in a slow rhythmic manner to a traditional tune played by the band in attendance. Three traditional songs accompany the presentation of dowry:

Neay Pream He Kaun Kamlas (Arrival of the Groom) · A song telling the story of the groom and his family's journey to the bride's house bearing meats, fruits, pastries, drinks and desserts of every variety to be presented on the wedding day.

Chambak Roy (Presenting the Dowry) · A dialogue between the matchmakers, parents, relatives, and friends of the bride and groom in which the groom's family and friends officially present the dowry gifts to the bride's family.

The woman then collects samples of the gifts and places them on a tray as the singer, through his song, describes the gifts and asks the bride's family whether they are satisfied or is it necessary to pick up more.

Amidst the laughter the bride's parents nod their heads in approval while displaying a wide grin. This is followed by breakfast of porridge, fruit and sweets while the master of ceremony and companion keep the audience entertained with folk songs. Here, the bride and bridegroom will usually feed each other, with the guests looking on. Only when they have finish their breakfast will the guests begin eating. Among Cambodians of Chinese descent, the tea ceremony will be held before breakfast for the guests.

Breakfast is followed by the hair-cutting ceremony which is a must at all weddings. It is a traditional rite handed down from the old days to add merriment to the wedding. Although in the old days the hair-cutting was for real, nowadays a mock hair cut is staged. The couple, having changed into traditional outfits of gold and yellow, are seated on decorated chairs. The master of ceremony and his companion then teases them and the family members much to the delight of those present. Carrying a tray with scissors, a comb and a bottle of hair spray, the first person given the honor to cut their hair is family matriach, Leum Sok, who pretended to cut the hair of the bridegroom. Soon she retrieved a gold ring from the hair which had earlier been placed there by the priest. She did the same to the bride after which the expensive hair spray was used.

This ritual is repeated by other elderly folk at the ceremony. Retrieving the gold or silver rings is to signify that the couple will have a prosperous life.

The solemnisation of the wedding then follows. The bridegroom, after another change of clothes -- this time dressed like royalty, approaches the entrance of the house where the bride, in a dazzling red outfit with gold embroidery, awaits him.

The washing of the feet ceremony is held where in the old days the bride placed the groom's feet on a tray and washed them. These days, however, she merely sprays cologne over the feet. The priest holds their hands together and chants. And after blessings from the parents, the couple put their hands on a pillow and a sword is placed across their closed palms.

The parents then tie red thread around the left hand of the couple and sprinkle scented water on their hands to solemnise the wedding. This ritual is repeated by others present.

Close relatives give rings or chains apart from the usual words of advice and well-wishes of happiness, good health, success, prosperity, and long-lasting love to the couple. The praises are acknowledged and witnessed by the loud sound of the gong and joyful cheer. The priest then lights three candles which are circulated among married couples seated close to the couple. They wave their hands around the flame and pass the candle on to the next person.

The candles go around seven times since seven is an auspicious number. The priest sprinkles flowers on the couple and others follow suit to bless the couple. Four songs accompany this ceremony:

Phat Cheay -- A melody inviting the bride, accompanied by her bridesmaids, to the pairing ceremony. A distinguished female relative leads the bride into the room.

Kang Saeuy -- A melody accompanying the offering of gifts to the ancestor spirits and asking for their blessings.

Bangvel Po Pil (Seven Rotations) Married guests sit around the bride and groom as the sacred flame is rotated seven times around the new couple. The smoke of the flame, however, is sacred enough to protect them from all evils if they are sincerely committed to each other. Family members who receive the candle motion their hands over the flame to guide the smoke of the sacred flame over the bride and groom.

Bay Khon Chang Dai (Tying the Wrists) -- While the bride and groom's wrists are tied with the blessing strings, the following song is sung: "We tie, we tie three strings to each wrist of our children. We wish for true happiness and success to this couple, who will always be together like wet grass seeds. We tie your left wrist to make you remember your parents. We tie your right wrist to make you carry on the family lineage and traditions."

The colourful wedding ends with a sumptuous dinner later at night with more songs and dances to entertain everyone.

After the wedding, the couple and their entourage also go to nearby parks or the palace rounds on the third day. Here, the newly wedded couple walk around in their finest clothes while the video camera rolls and the cameras click away.

The colourful Cambodian wedding ceremony steeped in tradition is an interesting yet seemingly exhausting experience. For most Cambodians, such nuptials represent more than a nod to the traditions of the past. Each marriage here in Cambodia is a moral victory, and another hope for the future.