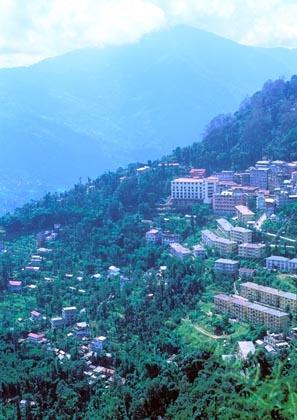 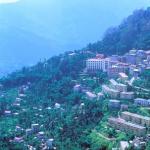 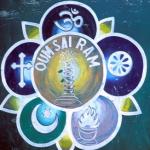 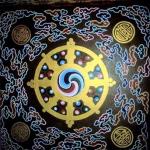 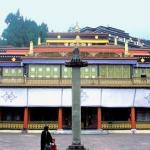 I don’t know why, but I’ve long had a maybe irrational fear of Tibetan Buddhism. Maybe it’s due to all those bloodcurdling paintings and ogre-like figures of the Tibetan pantheon - the demons and gatekeepers of hell and its changing-rooms. I couldn’t help thinking that the poet Ogden Nash’s famous “three-L lama” is really the Hell-lama, a sinister cousin to the Dalai and Karmapa.

So, when the opportunity came to visit the Himalayan state of Sikkim, feelings of anticipation were a little tinged, to say the very least.

Sikkim is home to the Nyingmapa (Red-hat) sect of Tibetan Buddhism, an unreformed group that fled south to the mountains of Western Sikkim following the great Tibetan reformation of the sixteenth Century, when the Gelugpa (Yellow-Hat) sect now headed by the Dalai Lama gained the upper hand. Also to be found in Sikkim is one of the few remaining monasteries of the Bon religion, the pre-Buddhist indigenous faith of the Tibetan people.

This trip starts in Gangtok, the Sikkimese State capital, in the province of East Sikkim. Getting to Gangtok is a trip in itself, along a tortuously winding road, where gushing waterfalls rush over lichen-covered rocks that line the roadside. The countryside is a super-fertile patchwork of post-monsoon greenery.

The city of Gangtok, now with over 200,000 residents, tumbles down the sides of a steep hill-ringed bowl that converges in a natural amphitheatre. Like a child grown too big for its clothes, Gangtok is now bursting at the seams, and is in dire need of an urban tailor to do ring-road alterations.

It’s election time in Sikkim, and the Sikkim Democratic Front is fronting the absurd notion that it is democratic. But the government electoral office shows where people’s sympathies really lie. Official Electoral Office vehicles are plastered with stickers showing the Karmapa and Dalai Lamas together, with the slogan “Karmapa for Rumtek”. This slogan refers to an ongoing debate as to just who is the real Karmapa Lama.

When the Karmapa Lama escaped from Tibet to India in 2000, the Chinese were more than just a little embarrassed. Recognized by both China and the Dalai Lama, the 17th Karmapa Ugen Thinley is the third most important figure in the hierarchy of Mahayana Buddhism, and head of the “black hat” Kargyupa sect. Kargyugpa originated in Tibet in the 12th Century. It is said that after the first Karmapa spent many years mediating in a cave, ten thousand angels came to congratulate him, each angel giving him a strand of hair. All these strands were woven into a black hat.

Young Ugen Thinley is now at school in Dharamsala, awaiting his return to Sikkim’s Rumtek Moanastery. However, one of the regents of Rumtek Monastery, Shampa Rinpoche, supports a rival Thayge Dorje. Until the matter is settled, the Karmapa’s seat at Rumtek remains vacant.

So who is the right Karmapa Lama? Gangtok resident and devout Buddhist Luwen Sherpa, for one, doesn’t buy into the argument. “The fact that the seat is still vacant shows that the truth hasn’t yet been discovered”, he says. “Only when the right figure is revealed will the seat be occupied once again”.

Rumtek Monastery is about an hour’s drive from Gangtok, following the turbulent Rehpola River, along a road that varies in condition from fair to atrocious. After crossing the River, the road begins a sheer ascent to the summit.

Nothing can prepare you for Rumtek. Not even the hair-raising drive up the mountain. When you get to the top, what you find is not just a monastery, but an entire monastic village.

Upon arriving at Rumtek Monastery, all the intellectualizations dissolve away. Far from being scary, Rumtek Monastery is a happy place. The friendly smiles of the resident monks soon convinced me that even the most frightening image depicted on its walls is in fact nothing more than a concoction of the human mind. I came away with a clear feeling of peace.

The peace didn’t last long. Old fears soon began to surface. Was it a fear of Tibetan Buddhism itself, or of powers gained and then misused in a past lifetime?  I had a strong feeling that I’d been down this hazardous road before, but had taken a wrong turning even before reaching the first checkpoint.

What I took to be the angry figure of Guru Rinpoche Padmasambhava didn’t help matters. This great Tibetan saint, a manifestation of the Buddha Amitabha (the god of compassion) is said to have been born in the blossom of a lotus in Lake Dhanakosha near Ghazni, on the Afghanistan-Pakistan frontier. So why couldn’t I see the compassion in his painted image? Maybe fear, like beauty, is in the eye of the beholder. Or maybe it’s just because I had been told that he was once a sorcerer. Whatever, when I later looked once again at the picture, all I could see was a happy figure playing a lute, surrounded by equally contented celestial minstrels.

If this minor miracle can be worked simply by one visit to a monastery, what was to come? Is Sikkim really, as the tourist brochures say as they say, “the land of mystic splendour”?

Ney Mayal Lyang or “heaven” is the name given by the Lepchas, the original inhabitants of Sikkim, to their motherland. The origin of the term can amply be seen by taking a trip to Northern Sikkim, home to the Kagyu monastery of Phodong. The sacred site of Kabi Longstok marks the place where a blood brotherhood treaty was signed between the Tibetan and Lepcha chiefs Khye Bumsa and Tekong Tek, back in the 13th Century. Witnessed by the holy mountain Kangchendzonga, this treaty is said to have marked the birth of the nation of Sikkim.

At Phodong Monastery, young monks are at school in an outdoor pavilion, chanting from a book of scriptures. Their chant slowly builds up to a crescendo, culminating in an exuberant “hoy”, like the roar of a football crowd when a winning goal is kicked.

A whole gallery of sacred art fills the walls of Phodong. Padmasambhava, the Bodhisattva Dorje Chang (“Holder of the thunderbolt”), the Sakyamuni Buddha and many others. Meanwhile, one of the lamas tells me about the intense spiritual discipline still required here, “I’m off to meditate in a cave for about a month”, he says, in an off-hand manner implying that this is a quite ordinary feat.

Despite the sheer beauty of these Kagyapa monasteries, a visit to Western Sikkim, the home of Nyingmapa, still evoked images of fear. After all, didn’t the Nyingmapa still practice Tantric rites that had long before disappeared from mainstream Buddhism?

En route to Western Sikkim, we pass the Bon monastery of Yung Druk Kundrak Ling, in the little town of Kewzing. OK, the monastery does contain some pretty terrifying hell pictures, but the religion itself seems benign in the extreme. The Bon faith is said to have originated from Central Asia, between 8,000 and 18,000 years ago. In its original form, it was based on the belief that spirits residing within mountains and rivers, trees and sky are sensitive to human action and therefore must not be harmed. It sounds like a religion for today – and when I saw a picture of the Dalai Lama on the altar, giving his imprimatur, I was totally hooked.

The climax of the trip comes at Pemayangtse monastery, in the town of Pelling about 20 km from the coronation site of the first King of Sikkim at Yuksom. Pemayangtse is the most important monastery of the Nyingmapa order, first built as a small temple in the 17th Century by one Latsun Chenbo.

Pemayangtse is an astonishing place, a three-storied temple decorated with a priceless collection of frescoes, murals and thangkas. On the ground floor are paintings of buddhas, bodhisattvas and rinpoches. Then I climb a rickety wooden staircase to the top level, where a seven-tiered carving  Zangdoplari, by master sculptor Dungzim Rinpoche, fills the whole room. The sculpture, with its rich and finely-wrought detail, is said to depict the architectural layout of heaven.

At last, any fears of the three-L lama had been well and truly laid to rest. I came away convinced that there is nothing to fear in Sikkim. In fact, the only thing to fear is fear itself.

Currency: Indian Rupees. One US dollar equals about 50 Rupees.

Getting There: The most direct route is Melbourne-Singapore-Kolkata (Calcutta) aboard Singapore Airlines. The excellent Indian domestic airline Jet Airways flies regularly from Kolkata to Bagdogra, from where Gangtok is 30 minutes by helicopter (this service is heavily subsidized, costing only $US16 one way). For helicopter bookings, contact Namgyal Treks and Tours (see below).

Namgyal Treks and Tours is excellent, with a wealth of expertise throughout Sikkim, Bhutan and Tibet. Contact details: