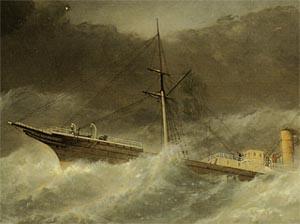 Image © 1991 Typhoon and Other Stories 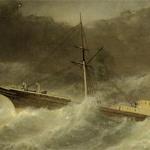 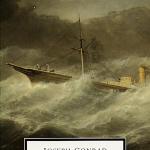 "Gon. Nay, good, be patient.
Boats. When the sea is."
-- William Shakespeare, The Tempest

Because Siam was never colonized, there are not many literary accounts of it during the colonial era. But when newspapermen turn the Western canon upside down for some timeless description of Bangkok, what falls out is usually Conrad's novella The Shadow-Line, the last of three included in Typhoon and Other Stories. Conrad's paean to Bangkok is about a paragraph long. He praises it as "the Oriental capital which had as yet suffered no white conqueror". As yet: Shadow-Line is set in the late 1880s, just a few years after Great Britain had completed its piecemeal conquest of Burma. So Siam's independence was still very tenuous.

But the most frequently quoted line from this passage may be: "It was amazing to think that in those miles of human habitations there was not probably half a dozen pounds of nails." Whether he knew it or not, Conrad was recording the use of wooden pegs instead of nails in the construction of traditional Thai houses. Now a visitor to Bangkok would record the amazing prevalence of concrete. But one thing has carried over from Conrad's description -- "the vertical sunlight, tremendous, overpowering, almost palpable". For the record, Conrad calls the city "Bankok" and the Chao Phraya River the "Mei-nam", the Siamese word for "river".

Shadow-Line relates a harrowing sea journey from Bangkok through the Gulf of Siam -- harrowing more because of disease than because of rough seas. The diseases are cholera and presumably malaria, as quinine is worshipped as "a magic powder". The problem is that the ship's former captain has replaced the quinine with some useless powder. Why he did this is not clear. It may be that he was a madman who in Nero-like fashion played a violin while the ship went to pot. Or that he got "mixed up" with some woman from Haiphong. In the world of Conrad no less than that of Kipling, getting mixed up with the duskier races is a big mistake. One character in Shadow-Line bemoans the "nice boys" going "soft" in the East. They go soft because they do not understand the importance of "keeping white", whatever that means. And Conrad writes of the "mixed white, brown, and yellow portion of mankind", as if the people of the earth can be assigned unambiguously to a color of the palette. Most white men in the tropics were probably more pink than white, either through sun or booze.

At least in his later years, Conrad himself was not a drinker, and his tales sometimes warn us away from the devil alcohol. Early in Shadow-Line, Conrad trots out the pathetic vision of a man suffering from the aftereffects of a "complicated debauch": "We got up and went out on the verandah, leaving the supine stranger to be dealt with by the Chinamen. The last thing I saw they had put a slice of pineapple on it before him and stood back to watch what would happen. But the experiment proved a failure. He sat insensible." (Pineapple is one of the best natural remedies for nausea, so perhaps the Chinese knew precisely what they were doing.) In The Nigger of the 'Narcissus', the collection's flagship story (not used in the title probably for reasons of political correctness), we are told that a certain skipper "drank himself to death....He was a dandy boy!....Liked his lotion inside, he did!" Indeed he must have, as do many of the sailors in this collection once they have made landfall. As Orwell said, booze was the cement of empire.

Herman Melville, Joseph Conrad, Patrick O'Brian: these, in no particular order, are our prophets of the sea; and this collection perhaps more than any other -- and more than any of his novels -- displays Conrad's mastery of its terms. Each tale -- Typhoon being the third -- takes place predominantly in the water: the Indian Ocean, the Gulf of Siam, the China Seas. And like Melville, Conrad for the most part saw the sea as something either malevolent and indifferent toward mankind. Conrad's description of the onset of a stomach-churning typhoon is unforgettable: "It was something formidable and swift, like the sudden smashing of a vial of wrath." It was if "the whole China Sea had climbed on the bridge." And in Shadow-Line "the darkness turned into water".

Yet one cannot avoid the feeling that these tales, though set in Asia, use Asia only as one of the many "dark and wandering places of the earth", as Conrad puts it. Conrad was not a travel writer, and he was not out to impress us with his knowledge of the continent. Instead he is after the creation of a mood. Too much detail would spoil it. He throws in some place names to orient us: "Hong-Kong", Bombay, Byculla (a district of Bombay). But there is a sense in which his tales could be set anywhere, so long as it is someplace "wild". This explains why Heart of Darkness (set in the Congo) was so easily rendered as Apocalypse Now (set in Indochina), and why it could also inspire Daniel Mason's The Piano Tuner (set in Burma). An upriver journey, a storm, an epidemic -- these are all archetypical scenarios that need little in the way of historical or geographical background to make them credible and powerful. The Tempest, remember, has two "settings": a ship at sea, and an island. No more need be said.

But Conrad does occasionally venture a more specific context. The story Typhoon concerns a ship whose main cargo consists of hundreds of Chinese coolies, replete with pigtails and "dolorous, slanting eyes." Of this formless mass of humanity one is reminded of the propaganda films in Orwell's 1984, which depicted the "Eurasian" army as "row after row of solid-looking men with expressionless Asiatic faces, who swam up to the surface of the screen and vanished, to be replaced by others exactly similar." ("Exactly similar"? Oh, never mind.) When Conrad's "Celestials" talk they are unintelligible, and his characters make various disparaging remarks about them: They are coolies, not passengers; "they are only Chinamen"; "a Chinaman has no soul." We are even made to endure a few exchanges in the notorious Chinese-English pidgin, which consists of adding the suffix "-ee" to every monosyllabic wordee ending in a consonant soundee.

There are those who would say that insofar as Conrad perpetuates racial stereotypes one should avoid reading his work. But if this rule were consistently applied one could read very little. Writers must walk a fine line between making ethnic characters credible and making them into caricatures. It would not do, for example, if Conrad had his coolies sit quietly apart from each other, composing introspective poetry, and occasionally giving orders in perfect English to the ship's crew. Nor could his European sailors be racially tolerant or fluent in Chinese. And that is the whole problem with political correctness: it limits what we can say about an imperfect and often easily stereotyped world. Interestingly, Conrad's West Indian "nigger" is made to speak almost perfect English while his Englishmen's speech is riddled with the apostrophes of dialect. This accuracy is something that even contemporary writers fail to attain.

Sometimes one can be brought almost to the point of despair over the dearth of good fiction about Southeast Asia. You can probably count on your fingers the number of authors who have done it justice, either through the strength of their narratives or the precision of their portraits. Conrad is one of them, though for the former reason more than for the latter. And one feels a tinge of regret that the Conrad oeuvre, like Conrad the man, was finite, and that the tempestuous journey into the heart of darkness must eventually come to an end.

Review of Joseph Conrad's Typhoon and Other Stories, Everyman's Library, 1991.