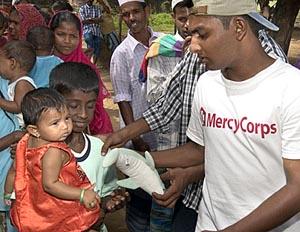 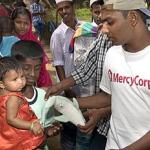 POTTUVIL, SRI LANKA -- The Sri Lanka offices of Mercy Corps occupy a single room on Dharmapala Mawatha, in a building run by the Academy for Educational Development. Senior Program Officer Nick MacDonald and two volunteers hammer away at laptops, preparing proposals and responding to local grant proposals; the bookshelf is stacked with project reports, brochures, and bumper stickers - useful for avoiding the traffic police when one is racing to the airport to accompany a shipment of family hygiene kits.

MacDonald was my point man here from day one. When I first arrived here, I sat down with him in an attempt to make sense of what Mercy Corps is doing in Sri Lanka, and what their long-term goals might be.

He was frank with his views on how effective, long-lasting development must be approached.

"Everybody wants to see pictures of people throwing food from trucks - or, even better, from helicopters. Other agencies are better suited to that task: UNICEF, Oxfam and Sewalanka, to name a few. Why would we go head to head with them? Our interest is in working with local agencies to help people rebuild their lives, and their homes, and their businesses. No one is going to die here within the next week; food is no longer a problem. We have enough time to plan this out, and do it right."

MacDonald, a veteran of three wars and two natural disasters, has spent much of the past few weeks coping with journalists who want to see relief in action; the media, as a rule, has little patience for programs that build slowly and last a while. There's an eternal demand for those shots we've all seen from Ethiopia: supplies dropping into a sea of hands, and saucer-eyed children bottle-fed by Red Cross workers.

"Granted," he added, "there's not a lot of drama in what we do. And sometimes the media don't understand. Building local capacity isn't sexy; you don't have a lot of white women cradling black babies. But a lot of what makes good television, doesn't make great development."

Since that meeting, ironically, much of what I've done with Mercy Corps has involved direct distribution. Last week, I was loading plastic sheeting off a helicopter, and riding with the Mercy Corps/Sewalanka team as they handed out family hygiene kits.

Now, there's been a new development; one that will move me into the rank and file of Mercy Corps' hands-on relief effort.

First, some back-story. Mercy Corps doesn't often run programs in the USA. After September 11th, though, they partnered with two New York corporations -- JP Morgan Chase, and Bright Horizons (a daycare center enterprise) - to provide what they called "Comfort for Kids." These were small packages containing moral-boosting gifts for children: colored pencils and crayons, stuffed animals, and small toys. Often, in large-scale disasters, children are left to fend for themselves as their parents (if they still have parents) manage the rebuilding process. Provided a few creative distractions, though, kids prove remarkably resilient. These "comfort kits" are more than direct relief; they're a long-term investment that helps stave off the impacts of trauma.

Back to the present. Last week, during a dinner in Colombo (I'd returned from the southeast coast that afternoon), I learned that a Mercy Corps volunteer named Lyn Robinson was preparing to go shopping with several hundred dollars of private donor money, and buy a car load of toys and school supplies. She'd drive these out to Arugam Bay, where they'd be distributed to the children in the refuge camps. I arranged to join the trip, and shoot footage of the hand-outs.

As it happens, Nancy Lindborg - the brilliant, vibrant Executive Vice President of Mercy Corps - was in Sri Lanka on a three-day reconnaissance mission. When I told her about Lyn's plan, she lit up with enthusiasm. It would be marvelous, she said, to make this trip the seed of another "Comfort for Kids" project - growing it to a point where Mercy Corps could do as they did in New York City, and provide children of different age groups with toys, games, and drawing materials.

"You help take responsibility for it. Work with Lyn, and decide what should go into these kits. Find a way to package them. And take a separate vehicle; we can bring more toys that way, too."

Her invitation is at once thrilling and terrifying. But that's what I came here for: to work with my hands, as well as my head. Luckily, Dwayne Newton - my lifelong friend, and gifted photographer - arrived in Colombo yesterday. He'll work with me, documenting the purchase and distribution of these toys.

Lyn Robinson is a wraith-like blonde from Oklahoma, with straw-blonde hair, boundless energy, and an upbeat bread-basket twang. Based in Sri Lanka, she was vacationing in Phuket when the tsunami hit; a passionate runner, she was forced to run for her life - sprinting uphill, through knee-deep water. Now she's back home in Colombo, dividing her time between her work in wildlife conservation and volunteer work for Mercy Corps.

She's thrilled by Nancy's interest, and has scheduled our shopping expedition for the mid- afternoon. We'll scour the local toy and stationery shops, trying to put together "Comfort kits" that make sense.

Three of us - me, Lyn, and a Mercy Corps administrator named Surangani - slouch into dense Colombo traffic at about 3 o'clock. For reasons that now elude me, we think that it's going to be easy. In retrospect, I suspect it's because we were blissfully ignorant; we imagined we could walk into any store, and buy hundreds of cricket bats, dozens of stuffed dolphins, and scores of coloring books. The reality is more like a Keystone Kops scavenger hunt. We spend hours darting around town, buying a sack full of rubber balls here, a shopping cart full of volleyballs there, a sack of balloons somewhere else.

There are huge omissions in our purchases; it's unlikely that any kid of the male persuasion, between the ages of 10-12, will be comforted by one of our cuddly parrot dolls, or Barbie pencil cases. But we got what we could find, in the woefully limited quantities we could find it. And, hey - that's why they call it a pilot program.

The familiar tones of Hava Nagila, chiming from my cell phone, summon me to the lobby of our hotel at 7 a.m.. Two pick-up trucks await; one with Lyn and her driver, the other for photographer Dwayne Newton and myself. At quarter past seven, full of avocado juice and coffee, we set off on a 10-hour drive, 200 miles due East. Two days after returning to Colombo, I'm off to Arugam Bay again - this time with Lyn, Dwayne, and a full load of toys and games.

It's lusciously cool as we drive into the hills. Toque monkeys scamper across the roadside, and ibis sail through the air. Sri Lanka's hills are among the world's most famous tea-producing regions, and we pass numerous plantations and British colonial estates. The variety of vegetation is extreme, from rice paddies to palm trees, eucalyptus groves to rubber trees. Nearing the town of Kaslanda, we reach the high point of the trip - about 3,500' above sea level - and stop at a roadside store to pick up another dozen rubber balls. The towering veil of Diyaluma Falls appears on our left; and, after sampling to local brand of ginger beer we begin dropping, twisting ever downhill toward the Tamil communities and police checkposts of the East Coast.

The sun's still up as we enter the town of Pottuvil. Susan Romanski, who's running Mercy Corps' office while Jim Jarvie regroups in Colombo, is in a state of beatific mania. Yesterday, Susan - a slender, round-faced dynamo whose work as Mercy Corps' Emergency Program Manager routinely lands her in the planet's hot spots - was approached by a camera crew from the Oprah Winfrey Show. Oprah, apparently, has a personal interest in Arugam Bay, as one of her producers lost a friend in the tsunami.

The crew seemed harmless enough, filming Susan as she struggled to coordinate relief for the 3,392 families in the immediate area. They shot a few scenes of the local devastation, chatted with Susan about her biggest challenges ("the scope of the disaster - and making sure all of the camps get equitable relief"), and disappeared. Today, Mercy Corps headquarters called Susan to relay a giddy fact: her segment was airing on Oprah. Mercy Corps - along with two other non-profit agencies in Sri Lanka - will share a million-dollar grant from the talk show philanthropist.

Susan is afraid to check her email, and rightly so; if she was indeed on Oprah, her marriage proposals alone must number in the thousands. Instead, she calls an evening meeting of our staff at the private house we're bunkered in. It's a thick, tropical night; despite the ceiling fans, mosquitoes feast on our calves.

"These people," Susan tells us, indicating the local staff, "have been out all day, visiting the camps and trying to figure out what people actually have. It's always changing. People are coming in from everywhere, dropping off food and non-food items; sometimes they just come to the closest camp, plop something down, and leave. So it's turning out that some people have things - and some people don't."

Clearly, Lyn and I have not brought enough "comfort kits" to supply all of the have-nots; one camp alone has nearly 600 children. We decide to try two things. First we'll visit the Savalai camp. Their roster shows 102 children; between our stuffed animals, coloring books and rubber balls, we should be able to meet their needs. Next, we'll drive eight miles north to Komari, which - according to our local staff - is the most distant and neglected of the camps. We'll offer the Komari kids the high-ticket sport kit of their choice - cricket or volleyball or soccer - and throw in a Frisbee for good measure.

It's exactly the kind of relief work Nick thought we wouldn't be doing: handing stuff out. But no one else in this area, as far as we know, is addressing the fact that these kids are in dire need of distraction. True, Mercy Corps likes to work with local NGOs, and build long-lasting systems. But Mercy Corps is also about filling gaps - and you can see this one yawning 10 miles away.

Valley of the Langurs