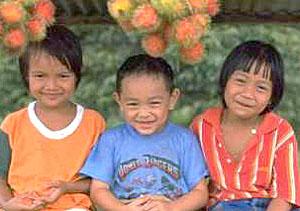 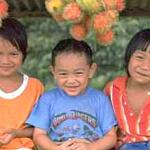 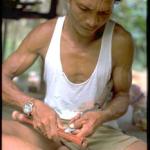 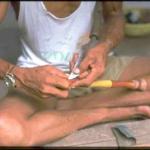 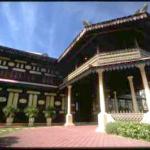 It did seem incongruous: old world western music - bluegrass, folk and western swing - blaring from the cassette deck while everything about me was so old world Malay. I should have felt guilty, but the car had got me to so many exotic unknown places (not always by design), that an indulgence in its luxuries - air con and my favourite tapes - seemed justified at last.

I was motoring down the many and varied roads of Peninsular Malaysia's eastern side, from Kota Bharu in the far northeast to Kuantan, which is halfway, down the coast. This way you pass through the states of Kelantan, Terengganu and Pahang.

Peninsular Malaysia has a chain of jungle-clad mountains along its spine. It is mainly this that has kept the eastern states isolated from the west - from colonial Malacca and Penang, and the booming Kuala Lumpur further south. Kota Bharu, accordingly, is the most authentically "Malay" city in the land. It has been attached at different times to Thailand, Sumatra, Malacca and Johor, and was not brought under British "Captainsy" till 1909. The Sultan, though, remained. The present one exhibits scant appreciation for modern western ways.

Kota Bharu is a traveller's mecca. It is a gateway to Thailand and is where you find Malaysia's most traditional art - silver craft and wood carving, songket weaves and batic, music and dance; this plus those serious toys - giant colourful kites, and metal spinning tops that spin for so long you could have a coffee and a cake while you wait for them to stop. There are museums housed in sumptuous teak palaces, Thai Buddhist temples and a wooden mosque said to be the oldest in the land - Kampung Laut.

There is also Tumpat. This forgotten little hamlet sits at the mouth of the Kelantan River. Tumpat is the port of Kota Bharu that the city no longer needs to have. Its shophouses are wooden, tottery and brown. Everything in Tumpat, come to think of it, is brown - empty boats askew in the shallow muddy docks, the shallow muddy docks, the market and its stalls. Colour - brilliant splashes of the stuff - comes courtesy of the ladies of the town. They emerge from the market, as would so many butterflies if they dwelt in one cocoon. They are lilac, crimson, bottle green and gold. Heads are covered by wrap-arounds, or by tulungs (scarves) - the forehead hugging types or the looser lacey ones that older ladies like to wear. The men seem content just to merge in with the brown.

Terengganu further south can be reached in maybe three hours if you rush. But in these congenial parts, who would want to rush? The road passes rice paddies whose sodden soils are turned by bullock driven ploughs, and an endless string of not quite traditional kampungs (villages) that spread themselves out languidly among shady casuarinas and palms.

At the town of Bachok it was colour once again that saw me stepping on the brakes. The foreshore was playing host to a market. - one of those irresistible produce-cum-trash-and-treasure fairs you find in most Peninsular Malaysia towns. This was the first one I had seen out of doors. There to greet me was Encik Talib, proprietor of the fresh fish stall. An expert in most things Malaysian, his knowledge extended to Australia as well, its politics and towns. He also used his not inconsiderable clout to line up some models for my lens - the fruiterer next door and the dealer in old Malaysian coins. Absolute hilarity ensued.

Beyond Terengganu City, whose wealth springs from oil, I took the opportunity to visit Pulau Kapas. It's one of a sprinkling of pristine islands that lie just off the coast. So secluded was the white sand beach where our tour group disembarked, there was nothing else to do but snorkel and swim. I snorkelled and swam. Hand feeding fish - bold flat-bodied stripey ones and slim-line iridescent blues - kept me happily amused for half the afternoon, a nice change from navigating roads.

Next I was faced with a choice between two inland lakes - Tasik Kenyir which is a catchment lake in Terengganu State or Tasik Chini in Pahang. I opted for the latter, this because the road there passes through Pekan. Dozing on the banks of the Pahang River, this old royal town occupies itself with the preservation and display of the icons of its past - splendid marble mosques and an old English mansion that houses an historical museum. In the garden of the latter are exhibited the Sultan's private riverboat, his ornamental litter and stretch limousine.

With its sheltered indentations, lotus-covered Tasik Chini belies its considerable size by appearing a secluded and tranquil retreat. Its forest-covered shores are home to the Jakuns. They are one of a number of native Malay tribes (Orang Asli) that inhabit the peninsula's interior. When you meet these congenial and fun-loving people you understand immediately why few of them, even with enticements, ever leave the forest. The blowpipes they carve to sell to tourists are as lethal as the ones they use for hunting themselves.

Pahang's modern capital is the orderly, if a little uninspiring, town of Kuantan. Most visitors gravitate to the riverbank. Here along the wide and tranquil Pahang a leafy promenade runs past the best array of hawker stalls in town. A char kuey teow - steamy and piquant - set me musing over other flavours of Malaysia I had savoured on my five day coastal drive. And now a dilemma: with the car to be returned at the airport when I left, there'd be no more funky bluegrass to bop to on the flight to Penang. Perhaps if I slip the tapes to the steward in charge of entertainment on the plane...

Getting There: Malaysia Airlines operates daily flights from Kuala Lumpur to Kota Bharu, Terengganu and Kuantan.

When: The best time to visit is the dry season (non-monsoon) from March through October.