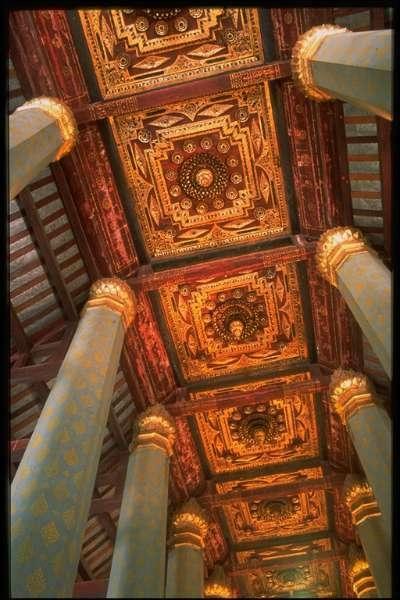 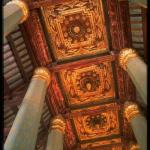 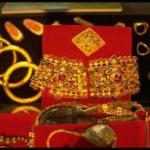 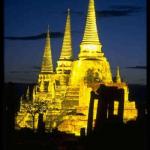 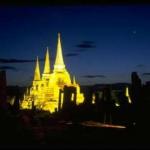 Ruins are notoriously deceptive. Gazing at these towering pagodas - Ayutthaya's most visible and splendid remains - it is somehow hard to imagine they at one time belonged to a city, a sprawling metropolis of international repute. Yet visitors to the old Thai capital three centuries ago spoke of a city of unbounded wealth and grace, of palaces of gold, giant fortresses and elegant teak homes. The city's population in its heyday was over a million - more than that of contemporary London.

Ayutthaya was capital of Thailand for 417 years - some 200 years longer than has been Bangkok. And like its successor, the old capital was a famous hub of international trade, described by one observer as "The centre of trade in the Universe". Within its outer suburbs were settlements of Portuguese, Dutch, Japanese, French, English and Chinese. Most foreigners came as merchants. Some, though, were engineers or military advisers, while others fought as mercenaries with the Siamese army. Emissaries were sent from Ayutthaya to Louis X1V of France, and to Iyeyesu Minamoto, the Shogun of Japan. When the French king sent the Thai king a letter, it was laid on a salver of gold, transported by royal barge rowed by 60 scarlet-clad oarsmen, and brought to his majesty in a gold palanquin.

Along with the city proper, nearly all visible traces of foreign settlement in the old capital have now long gone, leaving the modern day visitor with that strange and false impression that the site was once some giant monastery.

Ayutthaya's origins are steeped in a cloudy mix of legend and fact. That the town was of some substance before its official founding in 1350 is evidenced by the existence of Wat Phananchoeng, which was built in 1324. A still imposing monument, the temple houses the highly venerated Lung Poto seated Buddha, a bronze figure some 19 metres tall.

Ayutthaya was built on a virtual island at the confluence of three rivers - the Chao Phraya, the Lopburi and the Pasak. Its founder was the prince of the central Thai state of U-Thong, who was bent on increasing his power at the expense of Sukhothai, and on ousting the Khmers (both these ambitions were achieved). He could not have chosen a better base from which to operate. The three surrounding streams facilitated transport and afforded both natural protection for the city and a ready food supply. Rice thrived on the district's watery planes. Crowned King Ramatibodi 1 of Ayutthaya, "U-Thong" would have his new city reflect his regal glory. A palace was built (initially of wood), a network of canals dug to criss-cross the island and construction of the mighty temples earnestly begun.

Henceforth there would be no less than 33 kings of Ayutthaya - 5 dynasties. As the city's power and prestige increased, so too did each king's will to outdo the others in the grandeur of his works. These took mainly the form of religious monuments.

The kings were possessed of eclectic taste. Inspiration for their temples came from as far off as Sri Lanka and as near as Sukhothai, Burma and Khmer. The three classic chedis (bell-shaped towers that taper to a point) of Wat Phra Si Sanphet are Sri Lankan in style, underlining the strong religious links that existed between the two distant kingdoms. Wat Maheyong, built in 1424, was clearly modelled on Chedi Chang Lom at Sukhothai. When the infamous usurper, King Prasat Thong, returned from a campaign against Khmer in 1630, he chose Ankor Wat as the model for his "coronation temple", Wat Chaiwatthanaram.

At the height of its splendour Ayutthaya's Grand Palace boasted seven major halls and pavilions. Most of them were gilded, and all were lavishly embossed with gold-leaf, laquor and mother-of-pearl. Within the palace precinct was a parade ground and grape garden reserved for royalty. Sadly, only the foundations of the palace buildings now remain.

Even with the "Ancient Palace" gone, there is architectural splendour a'plenty on show in Ayutthaya today. Many of the original 400 temples are in surprisingly good order. Five are floodlit at night, creating a spectacular effect. These are Wat Phraram which was built to house King U-Thong's remains, Wat Phra Si Sanphet, the royal temple, Wat Ratchaburana with its huge and highly decorative prang (elliptically shaped stone tower domed at the top), Wat Mahathat built in 1374, and the Ankor Wat look-alike, Wat Chaiwattanaram, which presents the most fantastic night-time vista of all.

Ayutthaya's ever threatening enemy was Burma, which over the centuries mounted a score or more mostly unsuccessful campaigns against the Thais. It managed to occupy the Siamese capital in 1549 and place it under siege in 1760. A further siege seven years later saw Ayutthaya's resistance finally collapse. The Burmese victory was celebrated with wholesale destruction. The Grand Palace - its golden halls and pavilions - was leveled to the ground. Temples were burned, and the great standing Buddha of Phra Si Sanphet was melted down, its 171 kg of gold simply carried away.

Stolen too was every artistic treasure the conquerors could find. Happily, some would remain. Archaeological excavations in 1956 found, hidden in two crypts of the main prang of Wat Rachaburana, a treasure trove of gold and crystal Buddha images, plus golden votives, royal regalia and superbly crafted swords. The crypt at Wat Mahathat disclosed a similar hoard, including a relic of the Buddha encased in a golden jewelled casket. All of this finery is now on show in Ayutthaya's Chao Sam Phrya Museum.

There are other ways too by which the memory of Ayutthaya has been faithfully preserved. Following the sacking, the new Thai monarch, the redoubtable King Taksin, was able to regroup the scattered Thai army, win decisive battles, and finally expel the Burmese from the land. He made his new base at Thonburi, on the west bank of the Chao Phraya River some 70 km downstream from Ayutthaya. When moved across the river, this site became Bangkok.

So intent were subsequent Thai kings to retain the new capital's links with their lamented Ayutthaya, that they virtually replicated the old city's finest monuments. Bangkok's most celebrated structures - The Grand Palace, Wat Arun and the Temple of the Emerald Buddha - are the old Grand Palace, Wat Chaiwattanaram and Wat Phra Si Sanphet reborn. Ayutthaya's legacy remains.

Get There: Ayutthaya can be reached by train from Bangkok - around two hours.

When: The cool season is from November through February

Visa: Not required for stays of up to 30 days