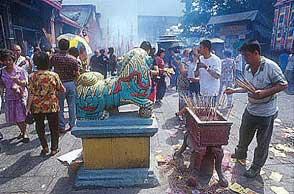 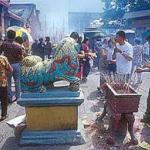 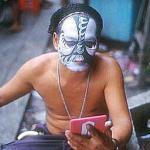 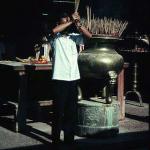 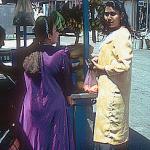 Penang is big enough to excite, small enough to be laid back. This compact city of around 200,000 people has plenty of good food and things to see - and sandy, palm-fringed beaches close by.

For centuries the Straits of Malacca, funneling between jungle-clad Sumatra and the Malay Peninsula, have been a vital, if narrow, artery for traders, adventurers and empire-builders (and a magnet for pirates, who are still active).

In 1786 Captain Francis Light of the English East India Company founded a settlement he named Georgetown on Pulau Pinang, Betelnut Island. Light is said to have loaded his cannon with Spanish silver coins and fired into the jungle to spur the efforts of convict laborers clearing the ground for a fort. That first fort, constructed from palm trunks, was soon replaced by the brick-built Fort Cornwallis standing today.

Essentially Chinese - and more strongly so than in Hong Kong or Singapore - Georgetown is an easygoing city of bicycle rickshaws, crumbling 'shophouses' and ancient temples. Many mosques and Hindu temples stand peaceably beside their Chinese counterparts. The colonial era bequeathed many elegant Georgian or florid Victorian public buildings; in the years between the World Wars a millionaires' row of florid seafront mansions arose on the eastern esplanade. Penang's heritage has come under threat since the repeal of a Rent Control Act which constrained deterred developers for many years.

The star attraction at Fort Cornwallis is Sri Rambai, a 16th century Dutch cannon which has survived a long and chequered history of capture and recapture to become a talisman for infertile women.

St George's Church on Lebuh Farquhar retains its graceful Georgian lines and its calm, but relatively austere, interior. High above the main door an inscription reads "By the munificence of the English East India Company in the year of our Lord 1817..."

Penang's Chinese built their Temple to Kuan Yin, Goddess of Mercy in 1800 - fully two centuries ago. At much the same time the Indian Muslim troops in Colonel Light's detachment began building the Kapitan Kling Mosque, whose single ocher-yellow minaret still towers above the old town. The Tamil Indian community's brightly painted and sculpted Sri Mariamman Temple is almost as venerable.

Across town the Acheen Street Mosque, with its distinctive Egyptian style, stands at the hub of the old Malay and Arab merchants' quarter.

Particularly eye-catching are the ornately-tiled roofs of the Khoo Kong Si in Cannon Square, the 'Dragon Mountain Hall' of the Khoo clan. "Very rich clan" emphasised our hollow-cheeked trishaw driver who had relished the free food and drink laid on at the Khoos' annual charity dinner. The temple's anterooms are crowded with gilded plaques enumerating the accomplishments of generations of clansmen.

What smells like blocked drains might simply be ripe durian, the formidably-armored, football-sized fruit which, in season, draws knots of shoppers to gather around any vendor who sets up on a street corner. A rich, creamy, custard-textured flesh surrounds the hard seeds, leaving an unexpectedly sharp tang. Gooey mess or powerful aphrodisiac? You be the judge!

Wandering the back streets at random is the greatest pleasure of a visit to Georgetown. Chinatown centers on Lebuh Chulia, Chulia Street, but there are many Malay and Indian pockets, the latter particularly along Lebuh Pasar. In the Chinese alleyways you will squeeze by garment sweatshops, clan associations, and open doors and windows through which joss sticks smoulder and televisions blare.

The Nam Wah Hotel & Bar is a classic old-time Chinese dosshouse on Chulia Street. In the courtyard incense burns at a shrine, motorcycles are pulled up into the lobby under the sleepy-eyed gaze of a Chinese clerk in grubby T-shirt and an Indian doorman in striped shirt and bellbottoms.

Since rooming at the Tye Ann Hotel in the 1970s, I have relished the murtabak pastries and the roti chanai breakfasts on Penang Road - they haven't changed.

The Taj Mahal Restoran in Penang Road still dishes up the morning roti chanai and syrupy coffee - to the babble of polysyllables rolling off Indian tongues. Roti pancakes sizzle on the griddle, the cook's hands moving constantly to shape, cut, knead and turn them. Up the street the murtabak man mixes minced meat, egg and vegetables into his patties: nonstop slip slop sizzle.

In the midday heat, the rickshaw drivers doze and read the Chinese papers, each carriage still bearing the enamelled colonial license tag that identifies "Jinricksha No. xxxx First Class" .

Let's do lunch at the Lum Fong, one of many Chinese coffee shops... find a rickety table right up under a ceiling fan to sit in relative comfort.

Three or four different vendors offer their wares under the one roof.

Mrs Char Kway Teow's smoking wok creates stir-fried chicken noodles, Mr Economy Rice, in the back, is self explanatory, and old Mr Noodle Soup clacks about in singlet and shorts on his traditional clogs, sitting down between busy spells to stuff rows of dainty dumplings with minced meat. Out front, yet another vendor is scrubbing down his trolley until the battered aluminium almost gleams; across the street another vendor offers wedges of papaya, diagonally-trimmed pineapple or crushed sugar cane.

Night falls and the shutters clatter down; life moves onto the streets as stallholders wheel their barrows into place. Gaudily-coloured es cendol , flavoured ice and jelly, is dished out of glass-fronted cabinets; banana fritters and pungent Malay fish curries sizzle and simmer over charcoal braziers. Watch the Tamil milk man toss the liquid from one cup to another without spilling a drop!

The hawkers serve up the best of South Indian, Malay and Chinese cuisines and a few adaptations of their own, exemplified by the Nonya dishes of the Peranakan, the Straits Chinese. Two of the best places to dine hawker-style when the sun goes down are the Esplanade Food Centre, on the waterfront, and another collection of hawkers along Gurney Drive, 3 kilometers (1.8 miles) north.

The Chinese Moon Cake Festival is celebrated on the 15th day of the eighth moon (August/September) with colourful lantern processions and feasting on mooncakes, a sweet associated with rebel conspiracies in ancient China.

For Hindus, the Festival of Lights signifies the triumph of good over evil. Celebrated during the 7th month of the Hindu calendar (October 26) Deepavali includes visits to temples and prayers at household altars. Homes are adorned with lights or oil lamps to symbolise the victory of Lord Krishna over the demon, Ravana.

Chinese New Year is celebrated with particular gusto in Penang, usually around February/March depending on the lunar calendar.

Most visitors may enter Malaysia without a visa. English is widely spoken. Money can be exchanged freely and cash machines are easily found in major towns. Climate is hot and humid throughout the year; tropical downpours are frequent but short-lived.

Georgetown is a short ferry ride from Butterworth and from the ferry terminal, express buses and trains depart frequently for the Thai border, Kuala Lumpur and Singapore. The Penang Bridge, South East Asia's longest, links the island with Malaysia's North-South Expressway.