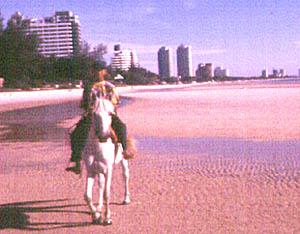 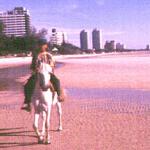 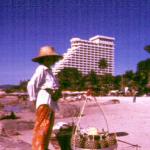 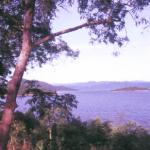 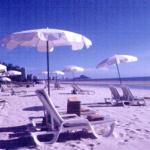 With the upgrading of Route 2 to the south of Bangkok, Prachuap Province has become within easy reach of the capital for long weekend trippers. It always was if Hua Hin was the destination. However the province has a lot more to offer than simply Hua Hin which is really only the gateway to the egg-timer shaped province and where the capital is known as "the Rio of Thailand."

Prachuap Khiri Khan is a small community of around 12,000 and generates its income from the large fishing fleet and local coconut and pineapple plantations. So where does the Rio connection come from?

Don't expect to see bikini thongs and macho surfers here because the similarity lies with Prachuap's picturesque Sugar Loaf Mountain and crescent-shaped bay. With a monkey temple at the summit of a smaller hill within the city limits and the numerous excellent fresh seafood outlets, it's a good town to use as base for excursions into the province. The deserted beaches outside of town, particulary Ao Minao, offer good, cheap accommodations for short stay vacationers.

Some 10km south of town, Highway 2 crosses the narrowest point in Thailand. A 10km trip west from here will take you to the Burmese border and one of the many stepped waterfalls gracing the foothills in this region. Only 90km to the north the larger Palau waterfall is accessible from Hua Hin, but it's a 70km trip from the main highway, providing an idea of how the Burmese foothills close in. Naturally there is a high military presence in this sensitive area and army posts are plentiful along the road. Expect to see military check points on any route to a foothills waterfall.

Further south, Thap Sakae exists for coconut products and excursions around the backstreets here will introduce you to both the versatility of the nut and the merchants. Oils, utensils, furniture, handicrafts and uses that must be seen to be believed (keep your eyes peeled). This really is Coconut Town.

The southern stretch of the province to Chumphon basically consists of coconut plantations to the waterline. It is here where some great empty expanses of sand can be found.

Bang Saphan Yai is one of the larger towns and also accessible from Bangkok by air-conditioned bus or by rail.

It's about as far as one might go for a long weekend and well worth the extra hour or so to get there.

Apart from the deserted beaches, the local area boasts the ubiquitous waterfall presence as well as many limestone cave shrines and, best of all, an old gold mine! One can pan for a while until the realization sets in that the mine actually closed for a reason. But it's different and it's fun.

Following the coastal road south from Bang Saphan Yai there are spectacular red cliffs to be found along with a few remaining cliff-dwelling locals in their precarious homestead perches. Only accessible by boat and ladder, it certainly stresses the lengths to which some humans will go to obtain privacy.

Accommodation is somewhat sparse but Suan Luang Resort and the more decorative Coral Hotel provide a real beachcombers getaway. Situated in the 100kms of coconut groves between Prachuap and Chumphon, there is little to do but relax or take a diving excursion in season to Ko Tao (not the Samui one). Rooms here cost bht 600-1800 depending on fan/air and size. Bike hire and watersports gear is also available

Back closer to Bangkok and near to Hua Hin, the silhouetted jagged peaks of Sam Roi Yot National Park are only an hour away from the Royal Resort on the road south. Frequented mainly by day visitors, the major attraction is the Praya Nakorn cave with its decorative shrine. The cave is accessible through a 20 minute boat trip plus a steep cliff climb. The cave is not the only attraction and government-owned cabins are pre-bookable for those wishing to stay at the many scenic beaches. As ever, travellers will find that leaving the beaten track provides satisfaction in both location and value for money. Cabins here can cost as low as bht 600 per night depending on seasonality. The Brit-owned Dolphin Bay Resort, near the entrance to the park, also offers good accommodations starting at around bht 1000 per night.

Partially within Prachuap province and easily accessible from Hua Hin is Kaeng Kracharn National Park (Thailand's largest at 3000 sq km), with its lakeside cabins and houseboats. The park borders Myanmar and this is thick jungle. Even day-trippers can experience the wilderness by taking the park's only road some 33 kilometres to Tho Tip where a 2-3 hour forest hike will bring them to an 18 tier waterfall. If you don't wish to hike, private operator's boats take escorted reservoir tours or longer excursions up the many rivers within the park, some taking several days and encroaching deep into the rainforest. Phanern Tung Mountain and Khang Kaew batcave are but two of the many park highlights.

Remote areas of the park nearer to the Myanmar border require experienced guides when trekking. For the adventurous, this gives a satisfaction lacking with Northern Thai treks. Quite simply, there is more to be seen and there are less people doing it.

The real bonus is the abundance of wildlife that can be found there including tigers, elephants, mouse deer, leopards, tapir, gibbons, sun bear and black bear. A huge cross section of birdlife including many thousands of hornbills habitate the park; quite a boast when only 3 hours by road from Bangkok, and certainly more a contrast to its sister park, Khao Yai, 3 hours north from the capital and the 2nd largest of Thailand's parks.

For all of this, Hua Hin still provides the nucleus of the province's well being. With a population now approaching 25,000 it has long been the Royal Resort and His Majesty still spends time here each year.

The Palace is located to the north of the town and although the resort has seen tremendous growth over the last decade it still follows the theme from which the Palace was named, "far from worries."

There are now big hotels including the Hilton and Royal Gardens (2 locations) but the focal point is still the refurbished Railway Hotel, named the Sofitel Central, Hua Hin. Built in the 1920's as a getaway for the Bangkok elite, it became most popular in the 40's for the likes of Somerset Maugham and others.

Now restored to its former glories, it depicts the luxury of the Golden Age of Travel and compares to Raffles Singapore, Le Royal in Phnom Penh, The Grand in Siem Reap and the Strand in Rangoon.

With a long stretch of beach to the Monkey Temple at Khao Takiab (Chopstick Hill) there is ample space and plenty of facilities to keep the visitor occupied. Hua Hin's night market thrives as do the seafront seafood restaurants of the old fishing village. Guest houses these days start at around bht 300 per room/night.

And activities include water sports and pony rides on the sands.

The resort's surge forward has brought about the construction of no less than 6 championship golf courses and now begins to rival the eastern seaboard as an alternative links destination.

Prachuap province's proximity to Bangkok as well as its coastal border and natural resources reflect a wealth not found in the north (excepting Chiangrai) and provides a diversity that should be experienced by any visitor to the Kingdom as well as any resident.