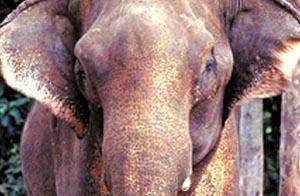 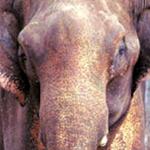 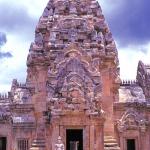 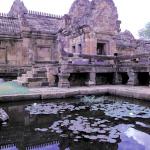 It's Round-up time again and the ever increasing popularity of Surin's elephant extravaganza takes pride of place in November's festival calendar. Thai elephants are visible all year round in the Surin and Buriram provinces of southern Isaan, but the round up offers more to the visitor than elephants and is really a gathering of the khmer clans from the region which boast up to 70% khmer-speaking individuals. Laotian influence fades away here, giving way to the strong Khmer presence. Not surprisingly really, as Buriram and Surin are a mere 40km from the Cambodian border.

Surin itself is a typical Thai country town no more noticeable than in the local favorite delicacies of frog and maengda (water bugs). It's still normal practice for townsfolk to walk the streets frog hunting in a monsoon downpour as well as frequently generating a battery of neon lights to attract the tasty bugs. Festival time swamps the town and the nigh on 40 year-old annual show has its centerpiece right downtown at the Lak Muang Stadium. Here, over 200 elephants perform sacred rites and rituals, hunting techniques and the more fun pastimes of tug o' war and football. There are also folklore plays and a rocket festival similar to that in Yasothon. Local artisans and street entertainers complete the party atmosphere.

Everyone trades and the Artist's Pub and the "joke" curry shops are hives of activity as well as the regular markets and Petchkasem and Tharin Hotels. The order of the day is to book early as group bookings generally fill the available properties up to a year in advance. Outlying towns such as Korat, and Buriram usually have space but it's better to be there in the thick of the fest.

Train tickets should be purchased well in advance for the late November shindig and expect roads to be jammed enroute to the capital on Sunday evening. For all that, it's still a worthwhile trek. This year's round -up is on Saturday/Sunday, November 25-26.

Naturally Surin has more to offer than a one weekend a year party and if travelling outside of festival time be sure to take the border road to Ta Muang where there are 3 well-preserved khmer-style temples on the edge of a plateau. This is deep in khmer country and beyond the cliff edge is Cambodia (literally - the dividing line IS the cliff!) and flat jungle land as far as the eye can see. Beyond Ta Muang on the Thai side is the road to Phanom Rung khmer ruins in Buriram Province, now more popular than its Pimai counterpart.

Another worthwhile project to visit in Surin is the Chakneua Pinery Forest reserve enroute to Si Saket, a must for nature lovers. This joint Thai-Danish project has a collection of some of the world's best pine species. Sisaket itself, is home to the yellow-leaved lamduan tree and there is an actual lamduan festival in March when the trees are at the height of their bloom.

Off the beaten path and some 58 km north of Surin are the villages of Taklang and Gapoe, home to the Suay people. These people speak a different tongue and migrated from Southern Cambodia around 200 years ago. Their forte is "elephants" and their knowledge and know-how of the beasts is unsurpassed. A "spiritual" communication, almost a language rapport, with the pachyderm is almost mystical in its enactment throughout the training, capture and rearing of the mighty beasts. Their methods date back to the Ayutthaya period of the kingdom when members of this community successfully assisted in seeking out King Suriyaman's lost white elephant. A trip here should be a preference if time allows.

Sikhorophum also boasts excellent Khmer ruins and these can be taken in on a combined visit to Surin and Buriram. These ruins apart, the town also is home to some true cottage industries. Ban Butom boasts excellent basket-weaving, now very popular with Bangkok afficianados. Ban Choke's silverware is rough but has its own style. In either village, locals can be seen working away in their own backyard, as it were. No big showrooms here as yet.

On to Buriram and the hilltop sanctuary of Phanom Rung which was built at the same time as Angkor Wat. The recently restored temple has magnificent Naga (Serpent) bridges like most major Khmer temples and now supercedes Phimai for annual visitor figures. One of a line of temples dotted from Angkor Wat, including Muang Tam and Si Thep, Phanom Rung is now considered to be the best khmer architecture on view within the kingdom of Thailand.

Buriram is the base for any visit to Phanom Rung and the town itself has a few more offerings.

Khao Kradung Hill offers bird's eye views of the surrounding paddies, for this is the farming heartland of Isaan and the home of somtam (papaya salad). Any wannabee photographer should start here if requiring rice farming shots. Near to the hill is Soradeg Stone Caring Centre, another photographer's dream. The centre is a sculptural marvel where students and teachers alike carve their pieces across the great lawns of the property. An afternoon here would be time well spent.

Buriram has its share of festivals and a November kite-flying show vies with the round-up for attention. Phanom Rung, however, is the main attraction and the son et lumiere festival is in March/April.