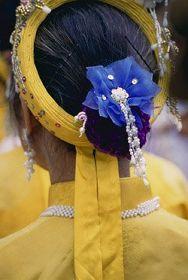 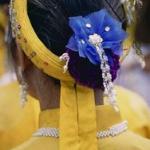 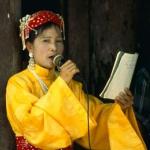 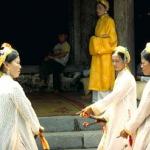 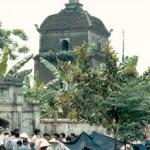 If you thought that driving from Hanoi to Ha Long Bay, or wandering around the Mekong Delta outside of My Tho was a cultural experience, you have not been to a Vietnamese festival yet.

In a place where there are literally thousands of pagodas scattered all over the countryside, and where there are festival celebrations almost every month of the year, going to the festival is a very common thing to do. Fetivals are primarily held (usually in spring or autumn), after the planting season, to pray for a bumper crop and therefore, prosperity.

One of the very special ones is the festival at the Dau pagoda, which takes place in the fourth lunar month (the first three months of the lunar year are the busiest for festivals.) The Dau Pagoda Festival, held on the eighth day of the fourth lunar month at the Dau Pagoda (Thuan Thanh, Ha Bac province), commemorates the goddess Man Nuong and is dedicated to the Cloud, Lightning, Rain and Thunder Spirits. This is also the birth date of Buddha, further adding significance to this festival.

It promised to be a nice but hot day, so we started early. After a bowl of Hanoi's famous pho, we drove out of Hanoi toward Ha Bac province. The car ride, on a good road, took a little over one hour. The Dau Pagoda is large and stands out against the horizon, on the Dau river. Today especially, it is hard to miss it. For the festival, a large colorful prayer flag is flying in front of the tower.

The roadside market was going full force by the time we arrived and got out of the car, a few hundred feet from the beginning of the foot path that leads off the side of the road by the bridge and runs alongside the Dau river, toward the pagoda. There are people everywhere. We are used to getting out of a car in the middle of a village where foreigners are seldom seen, and be instantly deluged with what seems like every kid in the whole province. That experience did not prepare us for this one. These kids were not just curious about us. They were in a festive mood. Soon, as we were making our way slowly (very slowly; you actually do not have to walk, the crowd just carries you) toward the pagoda, it almost seemed we had a procession of our own. As we approached we became immersed in the smoke and the fragrant scent of incense coming from the pagoda.

This being a major festival, people have come from all over the province, and are enjoying what looked to us like the Vietnamese version of a country fair. There were lion dances, wrestling and even a human chess game. A stick dance was going on where thirty-two sticks are brought from one pagoda to the other. People from two nearby villages (Phung Quan and Thang Dao) were competing for the title of the swiftest at fetching a pail of water. Urns are everywhere, with people lined up twenty-deep at each one to light their incense (great market for incense! Boy, it's hot!)

This day has great meaning for the Buddhists who make their annual pilgrimage to the Dau Pagoda, among the oldest pagodas in the country. Many Buddhists believe they must visit this site every fourth lunar month to pay respect to the goddess Man Nuong.

According to historical documents, the religious significance of the area dates back to the reign of Sy Nhiep who was governor of the region from 187-226. At that time, the Ling Quang Pagoda had been set up by the monk Khua Da La and was located to the north of the Duong River. On the other side of the river lived the Tu Dinh family, who were so grateful to the monk that they sent their daughter Man Nuong to the monastery to learn from the monk.

According to legend, one night, the monk tripped over Man Nuong on his way back to the monastery. When Man Nuong became pregnant, the monk declared that the Heavens had combined with the people to put a child in Man Nuong. The child was born at noon on the eighth day of the fourth lunar month. The mother took her child to the monk and he put the child in front of a very old tree and began to read his prayer book, tapping the tree with a sacred stick, asking the Heavens to give the child the gift of bringing rains to the village. The tree opened up and the monk put the child inside the trunk. Immediately, flowers bloomed all around the tree.

In the year of the rat, a fierce storm made the tree fall and drift down the Dau River. The strongest men in the village were sent to pull the tree out, but they couldn't. Man Nuong, who was doing her washing by the river, cast out her belt and the tree immediately came to her.

Festivals are a great time to visit pagodas and offer incredible opportunities to observe first hand that complex mix of origins, religion, myths, legends, sound, music, history and culture that make up Vietnam.