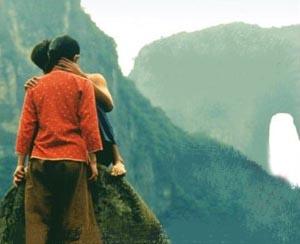 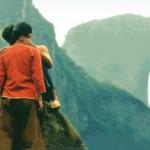 Music, literature, politics and a tender love triangle create a compelling dynamic in this charming, subtle, and picturesque memoir. Based on director Sijie Dai's autobiographical novel, two young intellectuals, Luo (Kun Chen) and Ma (Ye Liu), are sent to a village in the Phoenix Mountains in the province of Szechuan in 1971 to undergo 're-education' according to the edicts of Chairman Mao Tse Tung's Cultural Revolution.

Mao's re-education meant the stripping away of all bourgeois possessions, especially books; twelve-hour days of back breaking labor, and the gradual purging of all non-Communist ideologies. Nonetheless, amid the heartbreak and hardships of their fate, the two young men still turn their fancy to thoughts of love. Alas for these lovelorn lads, their thoughts of love are both fixated on the same fair maiden, Xun Zhou, the Little Chinese Seamstress.

The tale is mirrored throughout with the writings of Honoré de Balzac, the revolutionary French novelist whose prolific works helped fuel the fall of the Bourbon monarchy and the rise of Louis Philippe to power. In a daring act of lust and larceny, Luo and Ma get their hands of a trunk full of contraband literature, including several of Balzac's novels, which Ma hopes to use to win the heart of the Little Chinese Seamstress.

Although the two young men are remarkably similar in appearance, their character and temperament set them apart. Ma, the son of an exiled dentist, is a scholar and an accomplished violinist, quiet, studious and pensive. Yet it is Luo, the more glib and gregarious of the two, who wins the heart of the Little Chinese Seamstress. Ma suffers in silence, with no discernable malice toward Luo, as the two young men use their wit and the wisdom gained from education (with a little help from Balzac) to win the favor of the village chief and the admiration of the villagers, none of whom can read or write.

Although the story is essentially tragic, its pathos is punctuated with episodes of wry humor and comic irony, as Ma and Luo employ guile and artifice to easily outwit the gullible villagers. Early in the film, as their meager but cherished belongings are being confiscated by the village chief, Luo saves Ma's violin from the fire when he tells the chief that Ma would like to play a sonata for him titled 'Mozart is Thinking of Chairman Mao'. And when asked to recount the entirety of a movie they were supposed to have attended in town but did not, Ma and Luo shamelessly plagiarize a plot from the works of Balzac for the vicarious entertainment of the unwitting villagers.

Despite the patent unfairness of Chairman Mao's re-education campaign, Ma and Luo dutifully manage to make the most of their internment, for which they are eventually awarded the freedom to return to their former lives. But an unforeseen fate lies ahead for the village they left behind in the Phoenix Mountains, and Ma's heart will forever bear the monogram of the Little Chinese Seamstress.

Balzac and the Little Chinese Seamstress is available on DVD at Amazon.com

Get the book from Amazon