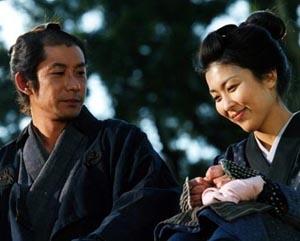 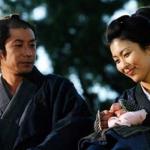 This Edo-era story centers around Munezo Katagiri, a middle-rank samurai near the end of the Tokugawa era, a few years before the Meiji Restoration in 1867. As the film opens, his friend and fellow-swordsman Yaichiro Hazama is departing for Edo, and a young man named Samon Shimada is courting his sister Shino. Kie, a beautiful and gracious family servant cares for his mother and attends to the Katagiri household.

When Katagiri's mother dies, Kie is betrothed to samurai Ieyasa. But even as the bride of a samurai, Kie is worked to exhaustion by her mother-in-law and falls gravely ill. When Katagiri learns of her illness, he goes to the Ieyasa household to rescue her himself, boldly defying all social and samurai codes. Safely harbored and allowed to rest, Kie is soon restored to health, and once again lends her beauty and grace to Katagiri's household.

Even with Kie's charmed presence, Katagiri's life is far from idyllic. His cohabitation with a fellow-samurai's wife is frowned upon by his superiors, and there is news that his friend Hazama has committed treason in Edo. Hazama returns home in a cage to serve out his sentence in prison, and it is suggested that Katagiri may be in league with him. When Hazama escapes, Katagiri must clear his reputation and face the ultimate test of allegiance to the shogunate.

Based upon the novel by Shûhei Fujisawa, The Hidden Blade is the second in a trilogy of samurai films directed by Yoji Yamada, which also includes Love and Honor and The Twilight Samurai. And although they are neither sequential nor related, each of these films shares certain essential qualities, in that the settings are humble and commonplace, they focus on low-level samurai with unique circumstances, and they pivot upon a subtle point of contention. No grandiose sets, no convoluted plots, no blazing heroics, and no gratuitous brutality or bloodshed. With masterful characterization through mindfully crafted dialogue, they cast the samurai everyman in the personification of bushido, the ultimate code of honor.