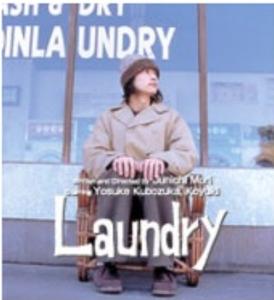 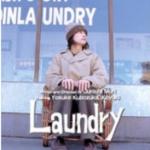 Oddly enough, an old Mexican proverb, "God creates them, and they find each other," perfectly epitomizes Laundry, an offbeat Japanese love story in which a brain-impaired laundromat attendant named Teru meets a suicidal kleptomaniac named Mizue. Written and directed by debut filmmaker Junichi Mori, Laundry stars rising young heartthrob Yosuke Kubozuka as Teru, a simplistic young man who was injured as a child in a fall down a manhole, and whose raison d'etre is keeping a sharp eye out for any social deviants who might try to steal someone's underwear from his grandmother's laundromat. A fresh-faced young actress known only as Koyuki plays the role of Mizue, a profoundly sad and mysterious girl who has taken to petty larceny after getting dumped on her twenty-fifth birthday by a philandering postman.

Each morning, the ever-faithful Teru opens up the laundromat and vigilantly mans his post on the sidewalk outside, while a steady stream of oddball patrons, including a wannabe prizefighter and an enthusiastic-but-lackluster photographer, come and go throughout the day.

One afternoon, Mizue, the beautiful, brooding young woman, arrives on the scene to wash a small load of laundry. When she absent-mindedly leaves a garment behind in one of the dryers, Teru valiantly answers the call to duty and pursues her through the streets of the neighborhood to return it to her. As a gesture of both appreciation and desperation, she invites him in for tea; and in a taut but tender scene, they reveal their mutual frailties.

Soon thereafter, on a morning following the midnight wail of sirens outside the laundromat, Mizue returns once again to wash her clothes, this time leaving behind a single green dress. But she never comes back to claim it. Instead, she returns to her hometown to live with her mother and sister until she can get her life back on track after her failed suicide attempt.

The story takes an unexpected turn when the laundromat goes up for sale. It seems that Teru's grandmother was somehow swindled, and Teru is now out of a job. With Mizue's dress, the only remnant of his sudsy world, he sets out on a naïve but resolute mission to return it to her.

On his journey through the backroads of rural Japan, Teru hitches a ride with a gruff but good-hearted guy named Sally, who takes an odd liking to him and bids him goodbye with the promise to help him if ever he should need it.

At long last, Teru finds the lost and lonely Mizue working as a dispatcher at an end-of-the-line bus station outside her hometown. She appears glad to see him, and the unlikely pair take up residence in Mizue's tiny apartment, until he receives news that his grandmother has died. Suddenly orphaned, Teru and Mizue strike off in search of Sally to take him up on his offer.

As promised, Sally takes them in, but when he capriciously decides to embark on a quest to find himself a buxom American wife, he leaves the two lost lambs in charge of both his business and his estate. In his absence, Teru and Mizue play house and all is peachy for awhile until Mizue's demons come back to haunt her.

Winner of the coveted Sundance/NHK International Filmmakers Award, Laundry is a sweet but even-handed romance that never trespasses into the saccharine; and, to its credit, Laundry lacks the banal, all-quirkiness-and-no-substance kitsch so typical of other films in its genre. As the story unfolds, it is artfully garnished with both powerful symbolism and subtle metaphors. Pastoral soundtrack by Zentaro Watanabe, and Kozo Shibasaki's frank cinematography are an added asset to the film.

Junichi Mori's characters are mindfully crafted as they walk the tightrope between salvation and the abyss. Yosuke Kubozuka plays the part of Teru with prodigious pathos and a subtle comic irony that belies his limited cinematic experience, while Koyuki brings an alluring depth to the character of Mizue, with her simple needs and modest dreams.

When it comes to love, death and the travails of daily existence, there's a little of Teru and Mizue in all of us. And whether in spite of, or because of its peculiarities, Laundry is indeed an uplifting and refreshing respite from the dizzying spin-cycle of life.

For full details on the film, visit the Pony Canyon Distribution website.